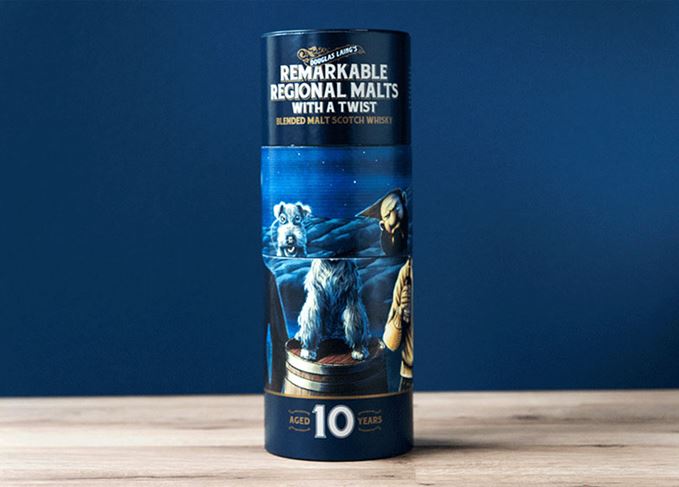 Twisted whisky: The commemorative bottling is a blend of malts from Scotland’s six whisky producing regions

Described as ‘the ultimate distillation of Scotland’s malt whisky regions’, the expression includes single malts from the Lowlands, Highlands, Speyside, Islay, the Islands and Campbeltown.

Bottled at 48% abv, the whisky is said to have a ‘sweet, buttery biscuit quality’ on the nose, with ‘mouth-coating milk chocolate alongside orange zest’ on the palate.

The whisky has been bottled as part of Douglas Laing’s continuing 70th anniversary celebrations, with only 5,000 bottles produced.

Fred Laing, chairman of Douglas Laing & Co, said: ‘This latest limited edition reflects very much our focus and philosophy to release excellent, artisan Scotch whiskies expressing some humour in the process, whilst not taking ourselves too seriously. After all, aligned to quality, Scotch whisky should be fun.’

The whisky’s outer packaging consists of a tube with twistable panels adorned with Douglas Laing’s cast of regional characters, such as Big Peat, the lighthouse-keeper used for Douglas Laing’s Islay blended malts, and the Epicurean, a gentleman character used for the company’s eponymous Lowland expressions.

The rotating panels allow the owner to perform a ‘head-swap’, placing the characters’ heads on the wrong bodies.

Remarkable Regional Malts – With a Twist will be available globally from mid-October, priced at £59.99 for a 70cl bottle.

The blended malt is the latest limited edition whisky to be released as part of Douglas Laing’s 70th anniversary celebrations this year.