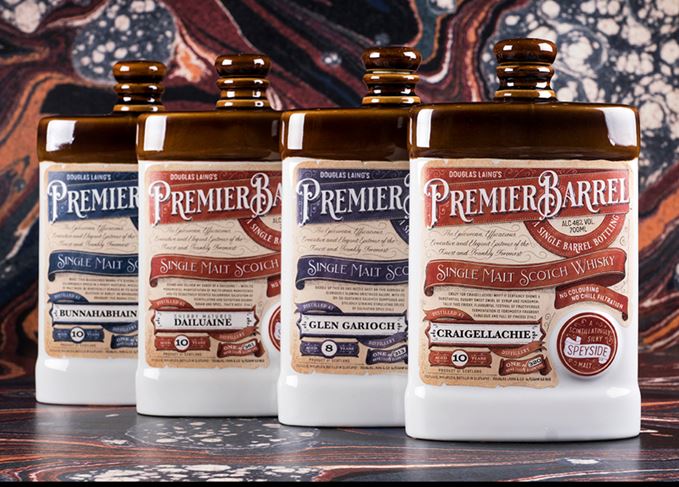 The four whiskies – a 10-year-old Craigellachie, an eight-year-old Glen Garioch, a 10-year-old Dailuaine and a 10-year-old Bunnahabhain – are each bottled at 46% abv and presented in a 700ml ceramic decanter.

The Dailuaine bottling has been fully matured in an ex-Sherry cask, while the other three whiskies have been matured in ex-Bourbon hogsheads.

The packaging ‘modernises Premier Barrel whilst honouring its traditional and artisanal charm’, with each decanter featuring a hand-drawn label, ‘eccentric yet romantic’ rhyming tasting notes and colour differentiation based on the whisky’s region.

The decanter is also housed in a wooden gift box designed to be ‘reminiscent of an ancient book’.

The full details of the new Premier Barrel bottlings are:

The relaunch of the Premier Barrel range comes on the heels of a flurry of releases celebrating Douglas Laing & Co.’s 70th anniversary, such as a series of limited edition Xtra Old Particular bottlings and a new Private Stock range of web-exclusive whiskies.