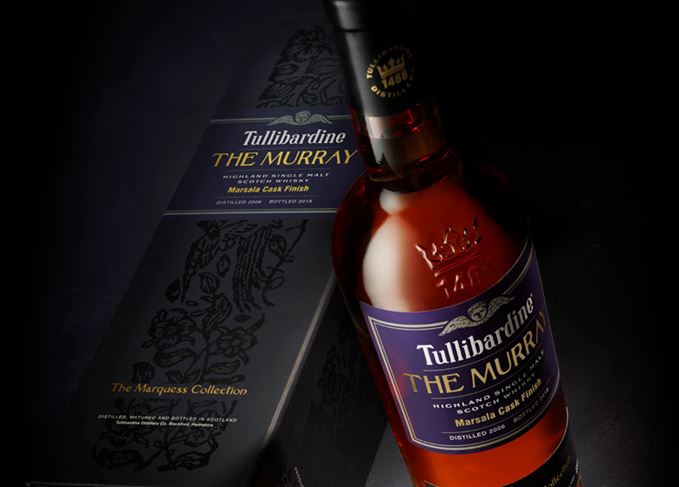 Tickled pink: The Marsala cask finish has given the whisky a ‘rose-tinged’ appearance

The expression was distilled in 2006 and matured in first-fill Bourbon barrels before spending an additional year in Sicilian Marsala wine casks.

The Murray Marsala Cask Finish is bottled at 46% abv, and is described as a whisky reminiscent of ‘plump summer fruits, malted biscuits and chewy strawberry candy’.

The latest addition to the Marquess Collection is inspired by ‘cask experimentation’ and builds on the Highland distillery’s growing range of whiskies with finishes.

Tullibardine master blender Keith Geddes said: ‘It’s another exciting moment for Tullibardine to be announcing The Murray Marsala Cask Finish – a whisky that pays tribute to our story and continues to experiment with new wood types to create a complex and delicious single malt.

‘We have sourced delicious and sweet Sicilian Marsala wine casks, which have been filled with our signature single malt and left to mature for a little over a year.’

The Murray Marsala Cask Finish is available at select retailers from December for around £49.

The edition is the second in the Marquess Collection to feature a wine cask finish, following the launch of The Murray Chateauneuf-du-Pape expression earlier this year.

The Marquess Collection is inspired by the distillery’s heritage and link with the hamlet of Tullibardine, and in particular historical Scottish figures that were bearers of the title ‘Marquess of Tullibardine’.

The Murray expression is named after Sir William Murray, the 2nd Marquess of Tullibardine, who was a leading figure in the Jacobite uprising of 1745 with Bonnie Prince Charlie.

Murray later died locked in the Tower of London.