Has Scotch whisky become too geeky?

A love of Scotch whisky often goes hand-in-hand with a passionate desire to dissect every element of its creation, from barley types to the intricacies of cask maturation and chill filtration. Is this off-putting to the casual consumer – or will the geeks truly inherit the Earth? Tom Bruce-Gardyne reports. 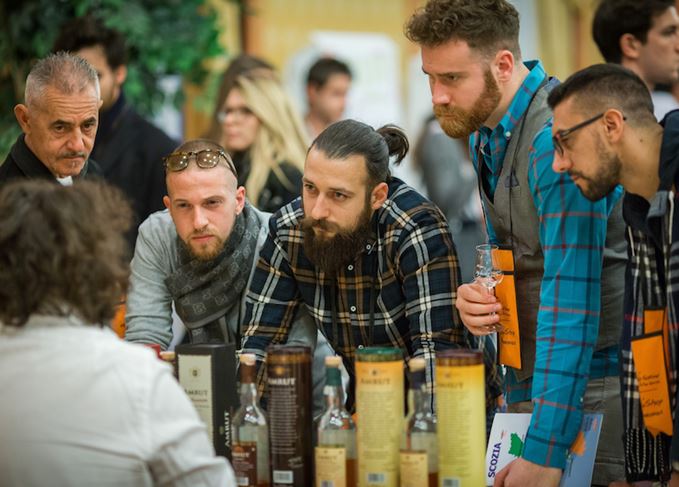 Devil in the detail: Whisky lovers are a notoriously inquisitive bunch, but can this go too far?

Writing about wine as well as whisky, I was once at an Australian tasting surrounded by MWs, or Masters of Wine. ‘Mmm… definitely getting brett,’ said one, withdrawing his finely-tuned proboscis from the glass.

The others nodded vigorously while I, like the fool in the Bateman cartoon, blurted out: ‘Who’s Brett?’ This provoked such smirking derision it almost put me off Aussie Shiraz for life.

Wine geeks really are the pits – brett being brettanomyces, a set of yeast strains with a cheesy, leathery aroma. By contrast, most whisky geeks are good-natured folk in my experience.

They’re less snobby and more willing to share their passion with others; but, just sometimes, the language and obsession with detail runs away with itself, inadvertently excluding potential whisky lovers.

Dancing on the head of a pin, discussing reflux, cut-points and whether sulphur really is the devil incarnate can be heaven for some and a turn-off for others. It also slightly misses the point, for Scotch whisky is ultimately a social drink. It’s who you’re with and where you’re drinking that really matters.

So here’s the question: Has Scotch whisky become too geeky for its own good?

‘Ever since I started working at Ardbeg 19 years ago, all of us there have been aware that we’re under the microscope from, let’s say, “interested parties” around the world. I’ve lost count of the number of whisky festivals and tastings where people have asked me extraordinarily detailed questions, which had me thinking: “Crikey! The level of interest here is amazing.”

‘The same goes for our guides at the distillery, led by Jackie Thomson, and the questions they’re asked. But we really enjoy it because it shows the passion of the audience and it keeps us on our mettle. I also think there’s a bit of fun going on, with a lot of jostling for supremacy among Ardbeg aficionados who want to demonstrate their knowledge in front of others.

‘But it’s true that as whisky companies we can spend all our time making products for ardent malt fans, forgetting that our job is actually to recruit more people into the world of whisky, rather than increasing the loyalty of those who are already with us. We’ve done very well with our special bottlings for the Ardbeg Committee, but we’ve got to remember that 99% of the world has never heard of Ardbeg.

‘We know that Ardbeg generates an obsessive interest, given the history of the distillery and the fact it nearly became extinct. One of the things I’ve discovered about “geekdom” is that people love talking about the past, as in past bottlings and how they remember a particular taste.

‘For our 200th birthday a couple of years ago we invited 200 to the distillery and told them to bring their own special bottle. Some brought some very rare and expensive Ardbeg, which they opened and shared. So there’s a real generosity and camaraderie as well, which is great fun.

‘People often ask me: “When you go around the world, are consumers different in different markets?” Well, as far as our cult follower is concerned, he exhibits the same characteristics whether he’s in Manila or Tallahassee.

‘Call it geeky, but I think there’s something uniquely beguiling and complex about single malts. The fact there’s a story behind every distillery which you can go and see and touch, and discover that it’s different from the one down the road or across the water, is endlessly fascinating.’

‘Interestingly, the word “geek” stems from the word “freak”, though it’s no longer an insult. Nowadays, to borrow a phrase, the geeks shall inherit the earth, and to be geeky has positive attributes, though they’re probably not ones that many women find attractive. This could be a warning for whisky brands that could potentially cut off 50% of their target audience.

‘Wine has fallen into a trap that it struggles to get out of, where an obsessive interest in it makes you part of a club. If you’re a geek, you’ve got to have your “geek-mates” around you, which poses a dilemma for the brand owner.

‘On the plus side, there’s the loyalty that comes from being part of a gang or tribe, but the downside is that sense of exclusivity that excludes others. If Scotch whisky wants to expand its reach, it’s probably worth thinking about the wine trap.

‘Another possibly male attribute is to go deeper and deeper into a subject until you can’t see the wood for the trees. In doing so, it normalises the fringes until they become remote and distant from reality. If I get landed with a malt fanatic at a party who keeps rabbiting on about the values and stories of his favourite whisky, I would probably be turned off the brand forever.

‘There’s also a risk of turning young people off as it can become quite snobbish and labour-intensive. To be a geek takes a lot of effort: it doesn’t just happen overnight and that in itself can be a barrier.

‘The response might be: I can’t be bothered with all that. However, I do think people appreciate the genuine passion of whisky geeks, as opposed to hipsters where it’s all about lifestyle and having the right beard.

‘Scotch can appear quite insular at times, being such a well-established and tightly-controlled drink, unlike American or Irish whiskeys that seem to have a lightness of touch and sense of humour. Very few Scotch brands have that, though I think Ardbeg would be an exception.

‘If you’re around whisky drinkers who talk about it in such serious terms, it can feel quite oppressive and unpleasant; whereas, at its best, Scotch is a great social lubricant for discussing life, and how strange and beautiful and messed-up it can be.’

Scotland’s distillery managers will tell you about the minibus or group of bikers who suddenly turned up, spreading fear and trepidation. With no time to hide under the desk, the manager is hauled out and tortured with arcane questions while pinned to the mash tun until he or she begs for mercy.

Obviously it’s not quite like that, and there’s a warmth towards most whisky geeks, whether they pitch up at the distillery or mob the stands at a whisky fair.

That said, the industry is aware that it mustn’t preach only to the converted, as Hamish Torrie explains. The idea that Scotch is somehow more earnest and geeky than its laid-back, fun-loving cousins in Kentucky or Ireland must be challenged.

Scotch should also learn lessons from real ale. Whether it was fair or not, a real ale stereotype emerged in the UK during the 1970s with sandals, a beard and bulging beer belly – a look that was resolutely male.

Quite what the whisky geek equivalent might be I’m not sure, but it’s something to consider.