‘Long John’ McDonald was a giant of a man, and giant of the Scotch whisky trade, in which – with his son Donald – he established one of the world’s most famous single malts. Iain Russell reports. 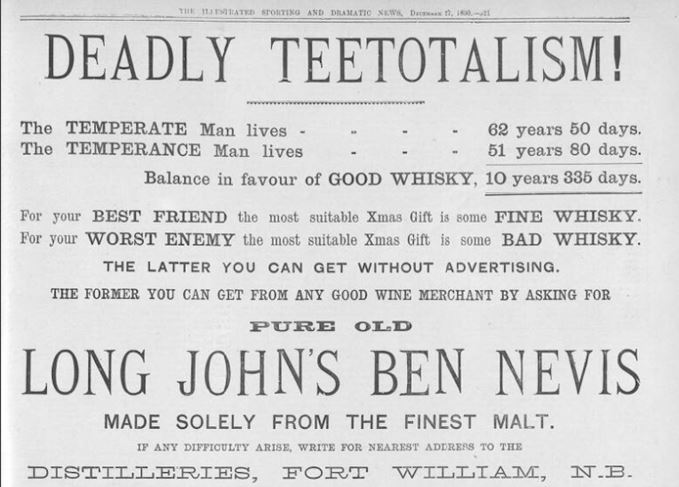 Ben Nevis distillery was famous in Victorian times as the home of Long John’s Dew of Ben Nevis, one of the best-known brands of Highland single malt Scotch whisky. Although the eponymous ‘Long John’ was not the founder of the business, he and his son Donald were the men who made it famous.

The distillery was built by Angus McDonnell in 1825 on the banks of the River Lochy, just outside Fort William at the foot of Britain’s highest mountain. He started making whisky there in February 1826, and production amounted to around 200 gallons a week. Some writers believe that he was a kinsman of ‘Long John’ McDonald (1799-1856), and that the latter may have worked for him at the distillery.

We know for certain that Long John became a partner in the business in 1830 and bought Angus’ remaining stake for the large sum of £1,200 the following year.

As his nickname suggests, the new owner was a big man: reputedly 6ft 4in tall and powerfully built. One author described him as ‘a happy Hercules, the tallest man I ever beheld out of an exhibition’, and he was known as a great sportsman.

By the 1850s, newspaper reports of Queen Victoria’s Highland jaunts had captured the imagination of her subjects, and Ben Nevis had become a popular tourist attraction. Long John was the leader of what we might now call the local mountain rescue team, and was often called upon to help rescue tourists who got into difficulties while climbing its slopes.

High times: based at the foot of Ben Nevis, Long John was mountain rescue team leader

He featured in newspaper columns all over Britain in 1838, after a party including the young Duchess of Buccleuch got lost in the mist while ascending the mountain. The alarm was raised at nightfall and Long John set off in the dark, ringing a large bell, to find them. The lost souls were found and Long John brought her ladyship off the mountain on the back of his horse, using his plaid as her saddle.

As a businessman, Long John had a flair for publicity. In 1841 it was reported that Prince Augustus, the Duke of Sussex, was an aficionado of Long John’s whisky, and had two dozen bottles in his cellar. Another broadsheet reported that his whisky was supplied to the King of Holland.

Long John even sent a cask to Buckingham Palace, to be broached on the 21st birthday of the Prince of Wales. The nation’s newspapers loved the story.

By the 1850s, Long John’s Ben Nevis whisky was available throughout Britain for 42 shillings (£2.10) per dozen, each bottle fitted with a ‘patent metallic capsule’ which prevented ‘the fraudulent substitution of any inferior article’. It was advertised as ‘highly esteemed for the excellence of its flavour and patronised by the Royal Family, the Duke of Buccleuch, and most of the Scottish nobility,’ and was ‘guaranteed pure and unblended’.

One wine and spirit merchant opined that ‘families will be convinced by a single trial that Ben Nevis Dew is truly a medicine’.

Long John’s whisky may have become famous, but his business was ailing. He had borrowed heavily to operate the distillery, having spent most of his capital on acquiring the business, and the banks were not patient when there was a downturn in the market for whisky. His estate was sequestrated in 1856, and the unfortunate bankrupt died soon afterwards.

After his father’s death, the young Donald Peter McDonald (1835-91) acquired the distillery and stocks, and breathed new life into the business. Now known as Long John’s Dew of Ben Nevis, it was sold with age statements varying between five and 11 years, ‘guaranteed pure and unblended and of great age and fine flavour’.

Donald supervised the expansion of the distillery. A concrete pier was built on the river, and a fleet of his own cargo ships was employed to carry whisky along the west coast of Scotland to Glasgow and other ports in the south.

In 1878, with demand soaring, Donald built a new distillery alongside the old and called it Nevis. He designed many of the buildings himself, using concrete in place of traditional brick or masonry where possible, and a bustling village was laid out to accommodate his employees and their families.

When whisky writer Alfred Barnard visited in 1886, the original distillery was producing more than 150,000 gallons of single malt whisky each year, while Nevis was turning out over 250,000 gallons. Barnard recorded a workforce of 30 men employed at Ben Nevis and 200 more at the new distillery, although many of the men worked on shared services such as warehousing, coopering and carting.

While much of the demand for the whisky came from blenders, Long John’s Dew of Ben Nevis remained, arguably, the world’s best-known single malt brand. The National Guardian reported in 1888 that ‘the demand for this most excellent of Highland malts is very considerable and steadily advancing in France’.

It was also exported to English-speaking countries such as Australia and the US. In every case, great play was made of the fact that Long John’s Dew of Ben Nevis was a single malt: ‘A fine Highland whisky in its pure natural state and not blended with grain spirit’.

Its fame was boosted by the talent for promotion that Donald had evidently learned from his father. When the British Medical Association issued a report on alcohol-related diseases, for example, he quickly adopted some of its findings in his advertising, to suggest that drinking Long John might prolong life expectancy.

Donald died in 1891, leaving a personal fortune of more than £110,000. The business was inherited by his sons, but it appears that they tired of the challenge to sell single malt in a market increasingly dominated by heavily-promoted blended whiskies.

In 1911, they sold the Long John trademark to the wine and spirits merchant WH Chaplin & Co, and one of the most famous names in the world of single malt whisky became a blended Scotch.