It may have looked legitimate to outside observers, but Robert Armour’s plumbing business in 19th-century Campbeltown was a front for one of Scotch whisky’s great black-market whisky still manufacturing operations. Armour’s activities also paved the way for the area to become the capital of the Victorian Scotch trade. Neil Wilson tells his story. 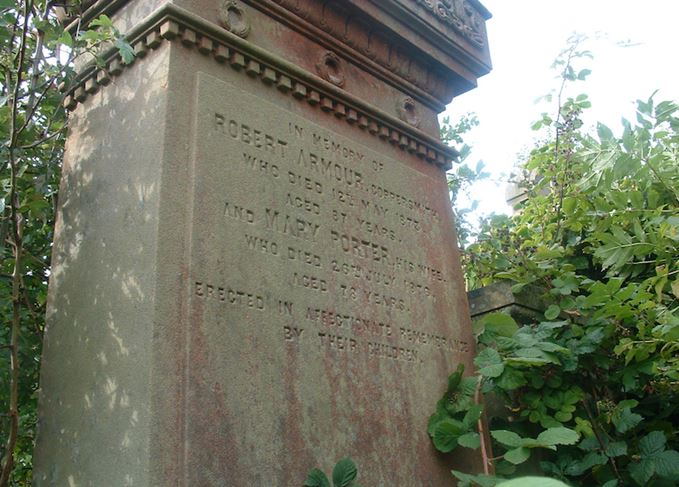 Resting place: By the time he died, many of Robert Armour’s clients had gone legit

In 1811, a plumbing and coppersmithing business was established in Longrow, Campbeltown, by Robert Armour. In the years that followed, the Armour name was to become indelibly connected with the area’s burgeoning trade in illicit distillation, laying the foundations for Campbeltown’s status as the epicentre of the Victorian whisky trade.

Armour was born in Campbeltown in 1787. His ancestors had emigrated from Ayrshire in the 1650s to settle in Kintyre, and built up interests in agriculture and distilling. One of his relations, James, had been granted a licence to distil in the area in 1793, using a 40-gallon still for which he paid £15, being one-quarter of the yearly rate of £1 10s per gallon of still capacity.

He also had to find ‘sufficient Security for the further sum of Fifty Pounds Sterling to answer the payments of such Penalties as he may incur, in the terms of the Said Acts of Parliament in that case made and provided’. In around 1798, however, he fell foul of the authorities and was found guilty of illicit distillation.

All this reminds us that whisky and the law have been inextricably linked for centuries – and it was for this reason that Robert Armour became one of the great black-market stillmakers in Kintyre and Campbeltown.

The Highland Line is often touted as the only historical border between the Highland and Lowland areas of distilling activity, but in the late 18th century there was also the Intermediate District, stretching across Scotland and including Kintyre and Arran.

In 1797 the licence duty in this area was raised to £9 per gallon of still capacity – and the result was that legal distillation disappeared in Kintyre for the next 20 years. In its place, of course, illicit distillation sprang up.

In 1811, Robert Armour moved into the full-scale, clandestine manufacture of copper still bodies, heads and worms for a large client base that stretched through Kintyre and into Arran.

In between: This map from 1799 shows the extent of whisky’s Intermediate District

Even private distillers who had previously distilled legally for their own consumption moved into the illicit trade to make a fast buck. While Armour’s premises on Longrow fronted as a legal plumbing business, to the rear the undercover business of still-making, and possibly even illicit distillation, was carried on.

The business flourished and, over the course of six years and aided by ‘a lad’, Armour turned over £2,000, producing nearly 400 stills, 53 of which were smuggled by fishermen over the Kilbrannan Sound to Arran, bringing Armour nearly £170 in income from that island alone.

All this trade needed to be accounted for, and Armour ensured that every transaction was detailed in a series of jotters which only came to light among other family papers, discovered by Dr I A Glen for the Scottish School of Studies.

From these records, locations of illicit distillation in Kintyre and Arran can be pinpointed, along with the names of every still operator. Many of these stills were worked by a ‘company’ or a group of tenants acting like a syndicate.

All the Arran customers were men, but 25% of the Kintyre distillers were women, as many of the menfolk would have been primarily engaged in fishing or working the land.

A typical transaction would have amounted to around £5, utilising 30-40lbs (13-18kg) of copper for the still, head and worm, creating a still with a capacity of about 10 gallons – and many ‘companies’ operated more than one still.

The fact that Armour always used copper, rather than tin, ensured that the distillate was of much higher quality. ‘Arran Water’ in particular had an excellent reputation, gaining renown as the ‘burgundy of all the vintages’, and was widely traded in Ayrshire. Armour’s stills, if well looked-after, were also reputed to have been good for 20 years.

It was a lucrative business that made the illicit distillers cash-rich. When William Jameson of Torylinn, Arran, had a new set of distilling apparatus confiscated by the Excise on 24 August 1815 near Smerby, north of Campbeltown, while it was being smuggled, he simply returned to Armour the next day and ordered another.

Armour did, however, create a cheaper tin still for a widow. He used copper for the head and worm, and charged the lady a mere £1 15s.

His other clients represented a roll-call of Kintyre and Campbeltown families, many of whom would go on to found legal distilleries and whisky dynasties: Colville (Robert’s mother was a Colville), Ferguson, Greenlees, Harvie, Johnston, Reid, Mitchell and Galbraith, among others.

The account books also note many notorious Arran distillers, such as Daniel Cook of Bennecarigan, who had been accused of breaking an exciseman’s leg in 1807, and admitted illicit distilling during the subsequent trial. He purchased a 19lb body and 11lb worm in October 1815.

As a source of locations of illicit distillation, Armour’s records are a treasure trove. In Campbeltown alone many stills operated ‘in plain sight’ in Lochend, Longrow, Dalinruan, Dalintober, Bolgam Street, Corbet’s Close and Parliament Close.

Further afield, Clachan, near Tarbert in north Kintyre, features, as do Machrimore and Pennyseorach in Southend. Armour also did business on the tiny island of Gigha, off the west coast of Kintyre.

Another notorious Arran client of Armour’s was the Cook family of Margarich (Margareoch). In November 1814, John Cook purchased equipment from Armour and, six months later, his son, John Jnr, acquired a 13lb worm for £1 12s 6d. Another relative, Malkom Cook, purchased a still body in December 1811.

Family store: The remaining traces of the Armour business in Longrow, pictured in 2005

The first legal distillery to be erected in Campbeltown in the 19th century was Campbelton in Longrow, near Armour’s premises, in 1817 by maltster John MacTaggart and banker-distiller John Beith, whose name features in Armour’s accounts. Cannily, he had quietly maintained his illicit activities until it made sense for him to legitimise them.

Armour started a family in 1822 when his wife Mary (née Porter) bore him a son, Alexander. Daughter Isabella followed in 1828, then Elizabeth two years later, twins Mary and Robert in 1832, Agnes in 1834 and finally Margaret in 1836.

Alexander was to join his father in the firm and, by 1851, Armour was also employing Robert Jnr as one of three coppersmiths. A glut of distilleries emerged after the Excise Act of 1823 encouraged the endemic illicit trade to go legal and, between that year and 1837, some 28 new distilleries sprang up across Campbeltown.

Some of these faltered, but when Alfred Barnard visited in 1885 there were still 21 going concerns. Armour’s firm had expanded greatly with this growth, and the casual observer can still see his firm’s name on the spirit safe at Springbank distillery.

Curiously, at the time of Barnard’s visit, when excavation work was being carried out in Armour’s premises, the Campbeltown Courier reported that ‘workmen found a still vat buried pretty far in the ground’, with a hidden flue connected to the main chimney. ‘It is supposed that at one time the ground beneath the floor of the shop has been a vault where secret distilling operations were carried on,’ the report added.

Robert Armour died on 12 May 1873, aged 87, and his wife Mary followed him into Kilkerran Cemetery in 1876, aged 78. He may have started out as a mere ‘plumber’ to trade, but Armour became instrumental in the birth and maintenance of the distilling business in what became the Victorian whisky capital of Scotland.