The creator of Scotch whisky’s biggest family-owned business was a tenacious, no-nonsense individual who walked 12 miles to buy the equipment for his first distillery, Glenfiddich. Gavin D Smith tells his story. 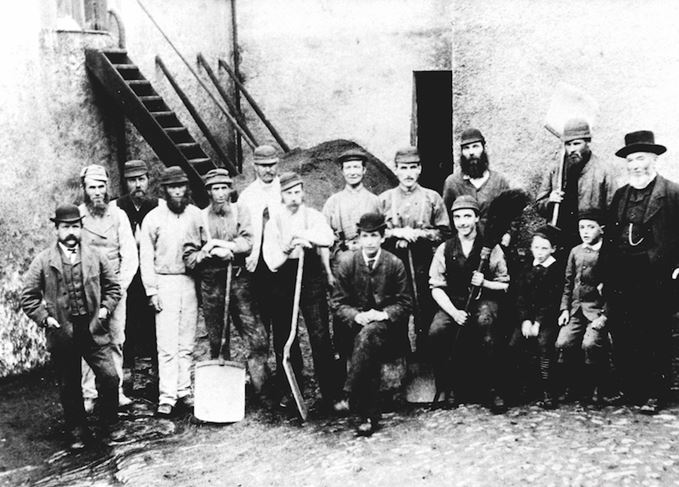 The beginning: William Grant (extreme left) pictured at Mortlach distillery in 1886, the year he left to establish Glenfiddich

The story of William Grant may be seen as a classic Victorian rags-to-riches tale, fuelled by a shrewd business brain, self-sacrifice and self-confidence, with a dash of good luck thrown in. However, the more one discovers about the driven, determined nature of Grant, the more it seems he would have found a way to succeed at any point in history.

William Grant was born in the village of Dufftown in Banffshire in 1839. What is now considered the ‘malt whisky capital’ of Scotland then boasted just one distillery, Mortlach, which was to play its part in the rise of William Grant from cobbler to whisky magnate.

His parents were William and Elizabeth, aged 55 and 26 respectively when he was born and, at the age of seven, William began to earn his keep by herding cattle. His education, at Mortlach School, was confined to the winter months, when the cattle were brought close to the farm for shelter.

On leaving school, William was apprenticed to a Dufftown shoemaker, and he married local girl Elizabeth Duncan in 1859. A year later, John, the first of their 11 children, was born (although two died in infancy).

In 1863, Grant decided to leave his shoemaking trade and became clerk of the Tiniver Lime Works at Crachie, on the outskirts of Dufftown. However, a quarrel between the two owners of the works saw Grant’s loyalties divided, and he decided to seek alternative employment again, becoming clerk at Mortlach distillery in September 1866.

He was soon carrying out the role of unofficial manager at Mortlach, and owner George Cowie recognised his contribution by formally appointing him to that position.

Grant joined the local Volunteer Movement, and it was typical of his tenacity, self-belief and organisational ability that he rose through the ranks to be commissioned, ultimately becoming a Major – the highest rank achievable by a non-professional soldier in peace time.

He came close to setting up his own lime business, before deciding to establish himself as a distiller in his own right. This was an extremely ambitious idea for a man with a salary of less than £100 a year and young children for whom to provide, but the family scrimped and saved every penny possible.

Grant’s dream of creating his own distillery became a reality when, early in 1886, he heard that the old distilling plant at Cardow (now Cardhu) distillery was to be sold off. He walked the dozen miles to Cardow in order to make an offer, and was able to acquire everything for the bargain price of £119 19s 10d.

He already knew exactly where he wanted to build his distillery – a field just north of Dufftown, through which a burn ran to its nearby confluence with the River Fiddich.

This field was called Glenfiddich, from the Gaelic for ‘valley of the deer’, and Grant was able to obtain a lease for the land, subsequently resigning from his post at Mortlach in September 1886.

Field of dreams: William Grant's location of Glenfiddich distillery was a deliberate choice

The Glenfiddich foundation stone was laid in the late autumn of 1886 and, along with William himself, the Grant family workforce for the Glenfiddich project consisted of his sons William (23), James (21), Alexander, or Alec (19), George (17) and Charles (14).

Where possible, stones from the bed of the River Fiddich were used, but for larger structures, such as the warehouse and malt barn, stone was purchased from the local quarry. The construction of these larger buildings was supervised by a professional mason, with labouring duties undertaken by Grant’s sons.

Work went on through the summer of 1887, and the first spirit flowed on Christmas Day of that year, with Grant’s sons undertaking many of the whisky-making duties. The total cost of creating Glenfiddich distillery and getting to the point where spirit was flowing amounted to slightly in excess of £800, a remarkably modest sum, even for the time.

Glenfiddich soon proved a great success, with its ‘make’ being widely praised and sought-after by blenders. Accordingly, the Grant family decided to create a second distillery on land adjacent to Glenfiddich during 1892/93, when the Scotch whisky boom was at its height. Called Balvenie, it was built around the uninhabited mansion of Balvenie New House, formerly one of the residences of the Duke of Fife.

Early days: staff at the Glenfiddich distillery in 1896. By this time, Grant had also set up Balvenie nearby

The Grants now owned two distilleries producing malt whisky, but it was the collapse of their largest customer, the Leith blending firm of Pattisons Ltd, in December 1898 that led William and his family to begin blending in their own right, going on to establish valuable export markets in many countries.

Various names were given to Grants’ early blends, but the one that proved most successful was Stand Fast, which was inspired by the slogan of Clan Grant – ‘Stand fast Craigellachie!’ The name remained in use until the 1980s, when it was replaced by Grant’s Family Reserve.

By the time William Grant died on 5 January 1923, aged 83, the company he had established was a profitable and secure enterprise. Grant had last chaired a directors’ meeting at Glenfiddich in 1913, and had been confined to his bed for a decade. He had been getting progressively weaker during the months prior to his death, though the indomitable spirit that had achieved so much remained intact almost to the end.

Shortly before his death, his son John wrote in his diary:

‘...had a long talk to my father re new wash-still charger, and new malt barn at Balvenie; Glenfiddich malt mill etc.’

John Grant then added in italics:

‘...he warned me to go on at once and not delay repairs.’

William Grant was buried in Mortlach Churchyard, just across the River Dullan from the former family home at Hardhaugh, and opposite the grave of his father.

Son John took over as company chairman, and the spirit of independence, determination and innovation that William had so cherished remains intact to this day.