The Perthshire distillery of Camserney sat in a cluster of farms and cottages beside the Camserney Burn, just east of Dull village – the birthplace of John Dewar. In 1890, long after Camserney’s demise, Dewar’s two sons, John Jr. and Tommy, built Aberfeldy distillery nearby, which survives as the home of the Dewar’s blend in Scotland. 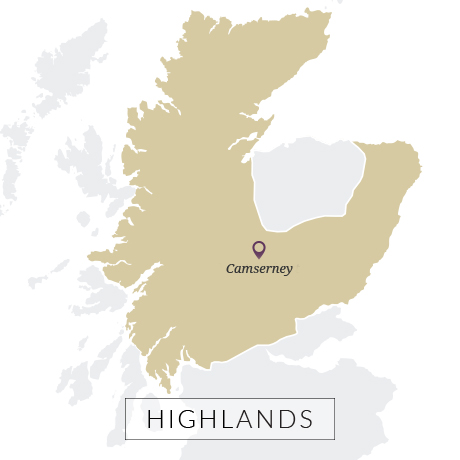 Camserney – also spelled Camsairnie and Camsine – began distilling in 1821 under John McGregor and Co. It was taken over by Alexander Menzies and Co. in 1825, though the new owner survived for just one year. The licence was passed to Duncan McDonald and Co., which distilled until 1832 when it appears to have mothballed the site.

Camserney reopened again in 1834 under David Livingstone and Co., but failed to last out the year before closing for a final time.

Although traces of the distillery are gone, the farms at Camserney are still on maps today.