Even though it was built in the late 1960s, Deanston has retained some old-style features in kit and distilling regime.

Its mash tun is open-topped for example, while the way it is run – low gravity worts, long fermentation, slow distillation – helps to produce a new make style which is in the waxy quadrant. This represents a switch back to the original style. In the Invergordon era, Deanston had conformed to a modern style of production, making a light dry ‘nutty-spicy’ make.

Today organic barley is also run through the stills and, in common with all of Burn Stewart’s single malts, it is bottled without chill-filtering or caramel tinting. 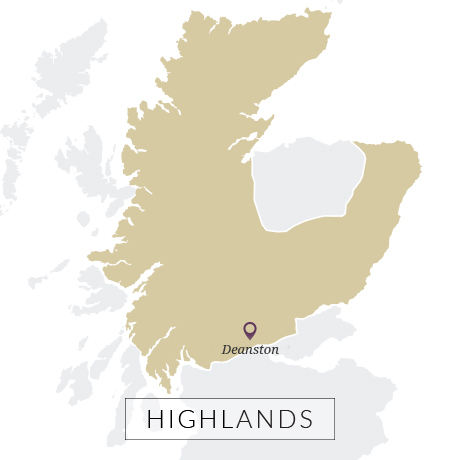 There are many distilleries in Scotland which started life as mills, but none of them had quite the scale of Deanston. This huge plant was constructed on the banks of the fast-flowing River Teith in 1785 by Richard Arkwright who used it as one of the sites for the development of the Spinning Jenny. It also had what was claimed to be the largest water wheel in Europe.

Weaving continued here until 1964 when the buildings were bought by Brodie Hepburn [see Tullibardine, Macduff]. Production started in 1969, but its original owners only had it for three years before the company was bought by private label specialist Invergordon. It ran for a decade before the ‘80s whisky slump forced its owner to shut it down. Eight years later, it was bought for £2.1m by Burn Stewart.

It can claim to be one of the greenest distilleries in Scotland. All of its power is generated by a turbine house which processes 20 million litres of water an hour. The excess electricity is then sold to the National Grid.

Although single malt bottlings started relatively early – in 1974 – it is only recently that Deanston has been elevated to a front-line single malt brand.