Produced at the multi-tasking Loch Lomond distillery in Alexandria, Inchmoan is a heavily peated variant of the Inchmurrin single malt.

Like Inchmurrin and Inchfad, Inchmoan takes its name from an island on Loch Lomond, and is essentially a heavily peated version of Loch Lomond distillery’s Inchmurrin single malt.

It is produced using Inchmurrin’s unusual stills – pot stills with rectifying plates in their necks – and has a character that combines light fruitiness and peat.

Releases have been intermittent and small-scale, but Inchmoan has recently been given a new lease of life as part of the Loch Lomond Island Collection. The single malt is now available as a 12-year-old matured in re-charred American oak and refill Bourbon casks, as well as a 1992 Vintage distilled exclusively in Loch Lomond’s straight neck pot stills. 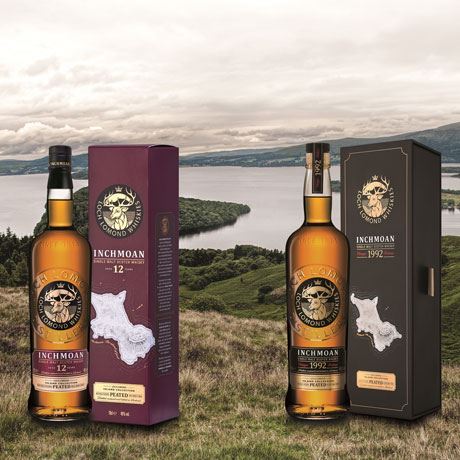 Since Loch Lomond distillery began operations in 1966, the plant has earned a reputation for being the most versatile and multi-functional in Scotland.

Additional stills of various shapes and sizes have been installed in the intervening period, including the twin pot stills with rectifying heads that produce Loch Lomond’s Inchmurrin and Inchmoan single malts.

Initial releases were infrequent and small in terms of volume, with bottlings appearing in the mid-2000s of varying (but generally quite youthful) ages, typically under the group’s Distillery Select label.

In 2014, Loch Lomond was acquired by businessman Colin Matthews, with the financial backing of Exponent Private Equity. Three years later, the company announced plans for a new Loch Lomond Island Collection range of single malts, including Inchmurrin, Inchmoan and Inchfad. Initial releases of Inchmoan include a 12-year-old and a 1992 Vintage.