More than 1,000 whiskies, and more than 6,000 enthusiasts to try them: the 15th edition of Whisky Live in the Netherlands merged notions of the word ‘spirit’ in an unforgettable setting. Dave Waddell joined the congregation at the high church of Dutch courage. Photography by Natasha Bidgood. 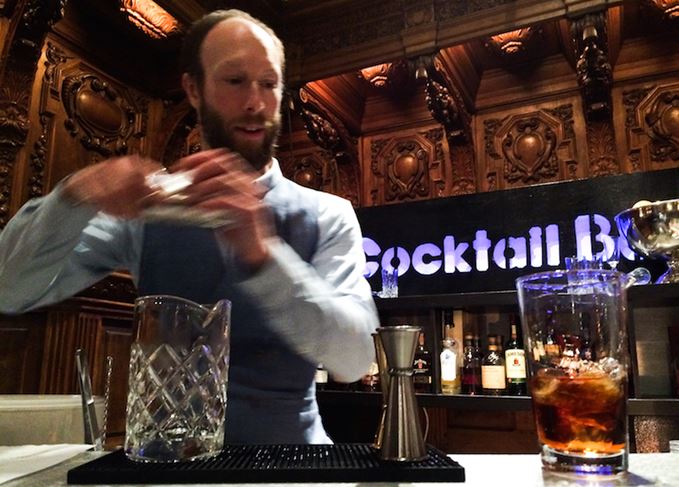 In the mix: a cocktail bar was part of the organised mayhem at Whisky Live

‘Dearly beloved, we are gathered here this day to get through this thing called...’

Well, for Prince, it is ‘life’. For the rest of us, gathered last weekend in The Hague, in the decommissioned and hallowed environs of Grote of Sint-Jacobskerk, it is the Netherlands’ 15th Whisky Live, temporary spiritual home to one Wouter Wapenaar, much Scotch, flashes of Dutch tartan, and the press and camaraderie of football crowds.

For fans of the metaphor, the word ‘spirit’ as analogy for the effects of whisky makes for seriously rich pickings; ancient philosophy’s ‘seat of emotions’ and medieval alchemy’s ‘volatile substance’ dovetailing neatly with our religious-minded ancestors’ reading of the powers of alcohol, for good or ill.

Thus is whisky many things. It is the door to our rabid lost selves, the King of Desire loosened upon the world. Water of life, it is the Philosopher’s Stone, the Holy Gel rubbed into the cracks of Communal Boredom. It is the aromatic path to memories long forgotten. Etcetera.

Worshipful objects: saints rubbed shoulders with the demon drink in the Grote Kerk

Consider: a very large 15th-century church given over to three days of whisky-fuelled revelry, its ornately carved seats warmed by the agreeably sozzled derrières of thousands of whisky drinkers, its crypts the floors upon which they bustle...

Dearly beloved, let us pray: Blackadder, Buffalo Trace, Adelphi, Doug McIvor, the ongoing furore of This Is Not a Luxury Whisky, heaps of very tall men, Benriach, the horizontal magnificence of a number of moustaches, Paul John, Nikka, an IB bottling of a 19-year-old Glendronach, Millstone Rye 100, co-founder and aforementioned Wapenaar’s apparel.

Before I get carried away by the spirit, the back-story to venue choice is in fact overwhelmingly prosaic. Spurred by a friend’s noble failure to get Speyside’s first whisky festival properly off the ground, and short on cash, Wapenaar and his two partners held the first of their Whisky Lives in a church in Amsterdam.

‘A good idea,’ he says, ‘because it was already decorated.’ It has moved several times since, but always, I think, between churches. Ready-made venues, and beautiful to boot: necessity, the mother of all invention.

Personally, whatever the reason, I’m thrilled. The church is, of course, a place of worship, but there was a time when the sacred and the profane mixed shamelessly, when it was also a market, a place of trade, to barter, as much a public space as it was private.

Whisky drunk on holy ground sees the long overdue re-acquaintance of two very Old Testament bedfellows, and in the weekend’s Whisky Live what we had was nothing less than a Rabelaisian mêlée: joyfully heaving crowds, independent bottlers standing cheek-by-jowl with distilleries, a centrally placed bookstall, a whisky cocktail bar.

Hell, three of the stands were whisky clubs, shrines to the notion of whisky as variety. The whole place – particularly on Saturday afternoon – was jumping.

If anything, it’s this very enthusiasm for variety that defines the festival. ‘The knowledge in Holland, the interest in whisky,’ says Wapenaar, ‘is quite high.’

Accordingly, as well as exhibiting over 1,000 whiskies, and cashing in on the expertise of at least 50 Scotch-based specialists, the diversity of stands – the degree of experimentalism, the bottles bought and sold, everything – is geared toward the open-minded, the enthusiast. If memory serves, drams available run from free to €6.

Spoilt for choice: festival-goers could choose from over 1,000 whiskies

As part of the deal struck for their whisky club stand, Maltstock members pitch in as (free) Whisky Trail guides. Indeed, one of the other whisky clubs, says Wapenaar, is a direct competitor: ‘I offer them a stall because I want to show as much variety to the public as possible.’

This is generous stuff, and if Wapenaar and partners are today happily in the black – the festival a juggernaut, its 6,300 places sold six weeks before opening day – then it’s not for want of trying: the festival makes fair profit from its €45-per-session ticket sales, but nothing that’d excite an accountant.

Depending on size, stands are charged at €250-1,500 per whole festival – and get to keep 75% of whatever they make. Masterclasses cost €10, the income generated split evenly between festival and whomsoever runs the class. ‘I know. We’re cheap.’

The payback: exhibitors willing to invest in a quality of stand that reflects its setting; punters able to afford a wide range of good to excellent whiskies; a festival run by enthusiasts, for enthusiasts; whisky for all.

Welcome to church, the real one.