In which our whisky ingénu and a gorgeous, sweary friend get to grips with the philosophy behind Compass Box’s much-discussed This Is Not A Luxury Whisky release. 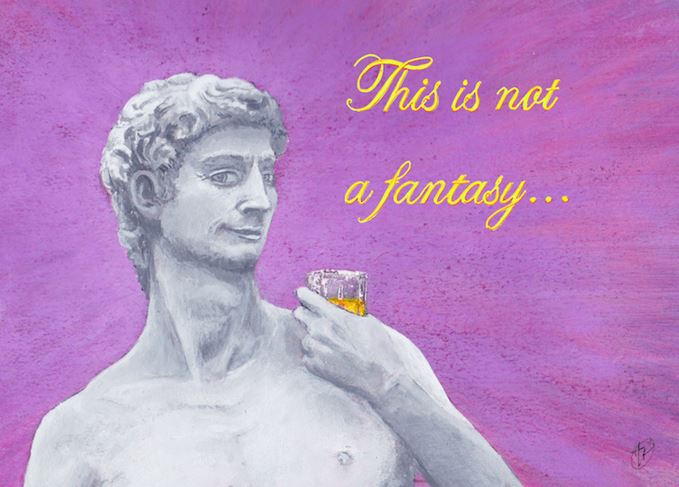 David's dram: But what would Georges Bataille have to say about Compass Box's bottling? (Illustration: Tony Felstead)

Yesterday I was given a bottle of whisky by a friend who is generous and handsome and swears a lot, wonderful qualities indeed, especially when combined in the same person, and extra especially so in my friend, whose striking resemblance to Michelangelo’s David has always served as my imagination’s departing point when left alone in a train carriage with nothing to do except obey my wandering wondering fingers. I do hope Ryan is reading this.

The whisky in question is called This is Not a Luxury Whisky. I pause for effect, but it will come as no surprise to learn that not only had I never heard of this delectable piece of nomenclature, but that, try as Ryan might, I could not be brought to understand what all the fuss is about, this despite being shown a video of its maker John Glaser explaining that the name is a kind of play on a painting called The Treachery of Images, which shows a pipe denying being a pipe, and that, to quote Ryan, ‘the real luxury’s the juice, and not the bottle. Get it? No? What the fuck, mate?’

What the fuck or no, I take issue with my handsome friend’s uncharacteristic show of impatience. I’ve watched the video several times since, and while with each viewing I’ve become increasingly aware of John Glaser’s slight and trim form, the casual smartness of his attire, his swept-back hair, the wonderful close-ups of the buckle on his big brown belt, I fail to see what is so luxurious about This is Not a Luxury Whisky containing ‘quite old malt whisky’, ‘very old smoky whisky’ and ‘old grain whisky’. Being old, Mr Glaser, is not a luxury. It’s an unfortunate truth.

However, according to Ryan, it’s more even than this. ‘The luxury’s not just about the whiskies’ bastard ages. It’s the fact that Compass Box has the shitting balls to tell us how much of what’s in the bottle. We know how much Glen Ord’s in there. We know how much Girv...’

I’m ashamed to say I can’t remember the rest of Ryan’s list, though it was precise and included maths, and I do recall being struck by what he said afterwards: ‘It’s a sacrifice. They’re giving the recipe away, to prove a fucking point.’

‘Sacrifice’, as well you know, my darlings, is a holy word, and seeing it roll syllable by syllable from Ryan’s perfectly formed lips was, well, I think I know now the meaning of heaven.

As for the point, as John Glaser explains in another video (this time wearing a pair of very natty Malcom X-type glasses, a grey jumper and no big brown belt), what he and Compass Box are trying to do in the name of me, the whisky drinker, is give me everything I ‘want to know... have a right to know’, namely, ‘one hundred percent of the components’ in the whisky I am about to drink, which is, Ryan assures me, ‘the real luxury, knowing what makes this fucker…’ – spinning my gift in his powerful hands – ’…so fucking good’.

Again, I beg to differ. Which is not to say Ryan or John Glaser are absolutely and categorically wrong. In fact, they’re perfectly correct. This Is Not a Luxury Whisky is a luxury whisky, though not because it’s the whisky itself that’s the luxury, but rather because, in claiming to reveal everything, it actually, as Georges Bataille might say, reveals nothing.

‘Sacrifice,’ writes Bataille, ‘is nothing but the production of sacred things.’ The sacred is by definition a mystery. In volunteering the keys to the secret of his invention, John Glaser makes This Is Not a Luxury Whisky perfectly unknowable.

It’s an old trick, perfected by the greatest of eroticists, though Ryan, I have to admit, remains unconvinced: ‘Mate. Fuck off.’