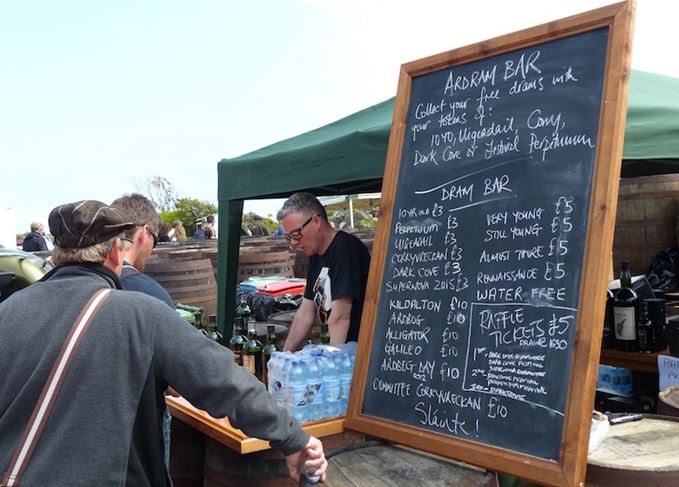 Spoilt for choice: The Ardram bar offered a wide array of the distillery's whiskies

People started jumping into the sea off the end of the pier about mid-afternoon, although reports of skinny-dipping were proven to be unfounded by a swift glance through warehouseman Neil Campbell’s binoculars. Given the weather and the party atmosphere, maybe later.

Campbell was reclining on a reclaimed 1970s sofa up on the hill overlooking Ardbeg Bay, playing the role of an employee sacked by distillery manager Mickey Heads and banished to a ‘house’ that consisted of a window, a radiator, that sofa and a few straw bales. Always expect the unexpected on Ardbeg Day.

Or rather Ardbeg Night, as Saturday was rechristened to mark the release of this year’s Fèis/Committee whisky, Ardbeg Dark Cove. A Fèis bottling with a difference: the Committee gets a stronger, more powerful dram, while the Fèis bottling was released for sale five days previously – and will earn a wider international release once Fèis is over.

Meanwhile, the festival-goers were being made to work for their drams: cryptic clues contained in miniature Ardbeg bottles, the need to crack the code in order to find out just where the hell they were going for their tasting. In our case, a hush-hush climb up the hill to Campbell’s impromptu abode.

The chat was entertaining enough, but the League of Nations of those attending the tasting (visitors from the US, Germany, Switzerland, Finland, Austria and Glasgow) were possibly even more enthralled by the whiskies: Dark Cove (of course), followed by Renaissance and the 2014 Supernova release.

Then just one more – a 1975 Bourbon cask sample that exhibited an astounding perfume of exotic fruits and a more brooding blackcurrant character, with the smoke retreating into the background. ‘If this whisky was a woman, I’d marry it,’ drawled one American visitor.

There’s almost too much to do on Ardbeg Day, especially when the knoll overlooking the bay looks so inviting in the May sunshine, the perfumed waft of smoke from Iain Spink’s hugely popular Arbroath smokies drifting slowly past. Not exactly local Islay produce, but that didn’t appear to diminish their popularity – or the queues.

I lost count of the number of events spread through the distillery grounds. Two sets of four tasting tours (of which our hillside escapade was one), ‘ordinary’ tours of the distillery, boat trips, a frankly bizarre-looking obstacle race and fiendishly difficult game of hoopla with the chance to win a bottle of Dark Cove. There was also something called ‘Blind Man’s Bung’, but I don’t even want to think about what that entailed.

‘We like to do something a little bit different every year,’ explained visitor centre manager Jackie Thomson, standing still for 10 seconds for the first (and last) time in the day, and the unstoppable driving force behind the event. ‘We just want everyone to come here and have some fun.’

It’s a feelgood factor reinforced by the investment (not just financial) in the day from the people who host it: many of the attractions, games and ideas came from the staff, including the black Dark Cove glass which had many a whisky fan scratching their head over the colour of their dram.

With no queues of nervous peatheads anxiously awaiting their chance to snaffle a hen’s-teeth-rare Fèis bottle, the accent was instead on celebration. A celebration of whisky, of music and of friends old and new; three German whisky nuts wearing baseball caps proclaiming themselves as ‘The Peatles’ (not sure what had happened to Ringo), chatting to a Swiss cyclist alongside a couple giving lunch to their baby girl. A large smattering of Ileachs too, which isn’t always the case on distillery days.

Just one thing didn’t quite ring true: as the sun blazed down, exposed skin pinkened and a few more visitors contemplated the cooling waters of the bay, there was nothing remotely nocturnal about the proceedings.

Ardbeg Bay was emphatically not a dark cove on this day of the year.