There’s more to whisky travel than the welcoming smile of a distillery guide and hi-tech interactive tours. Neil Wilson and Annandale Distillery’s Malcolm Rennie take a motorcycle journey back in time in the Scottish borders. 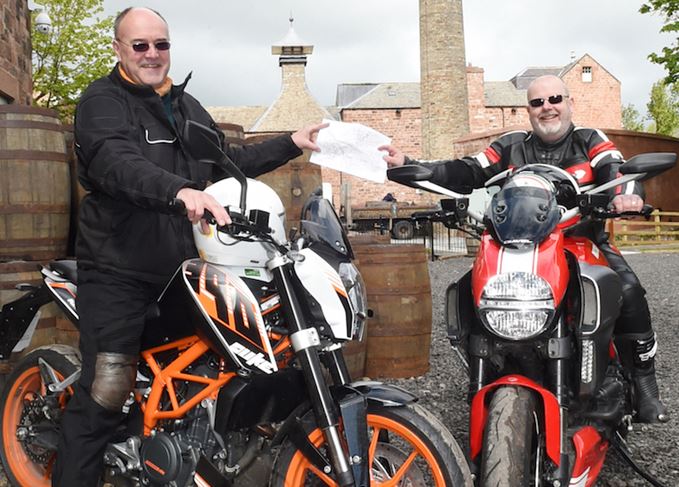 Whisky tourism. When did it all start and what exactly is it? It has not always manifested itself in the queuing masses at Feis Ile waiting to bag their next distillery bottlings … thank God.

When I started visiting distilleries in the early 1980s, I had to get written permission before arriving. Derek Bottomer at Talisker was adamant that tourists would never be catered for, as his distillery was merely a ‘whisky factory’.

I was not so sure and something nagged me that the landscape of Scotland and its national drink were inextricably linked. All it needed was a little vision. Now look at what’s happened.

I tend not to take the accepted model of distillery visiting as the sole option, but try to find a bigger picture that reveals the links between landscape, people and whisky. Recently, all these ingredients came together in a curious manner. It all started on Arran.

Back in early April I was on the island doing some research for a book I am writing on the distillery, which will be published to celebrate its 21st anniversary in June 2016.

Faye Waterlow, who has worked at the distillery since 1997, told me how she was weaned off her distaste of whisky (brilliantly, but you’ll have to read about it in the book), which she referred to as ‘the devil’s sauce’.

That word ‘devil’ rang a bell and, when I got back on the mainland, I looked at a map of the Solway as I was sure I had seen something that was the source of my conundrum. And there it was.

The Devil’s Porridge, a museum near Eastriggs, not far from Annandale Distillery. What was it? My father enlightened me. ‘It was the name they gave to the explosive cordite propellant they made that was used in munitions in the First World War. The whole area around Gretna was the largest munitions factory in the world at that time.’

I heard another bell ringing and headed for a copy of Scotch Missed by Brian Townsend. I turned to the entry for Glen Tarras Distillery, near Langholm. There it was:

‘The warehouses were used throughout World War I to billet munitions workers from Gretna, then lay idle for a decade and were finally demolished in 1930 by Mr Penfold of Brampton.’

As it was: Langholm distillery in about 1830 (Photo: Neil Wilson)

In order to get a clearer picture of the Gretna munitions factory and the link to Glen Tarras, I decided to persuade Malcolm Rennie, the distiller at Annandale, to join me on a trip to The Devil’s Porridge Museum, then up the Esk valley to Langholm where we would view what remained of Glen Tarras and the town’s other distilling remnant, Langholm Distillery itself.

Like me, Malcolm is a keen motorcyclist, so we decided to take our respective bikes, he on a Ducati Diavel and me on a KTM Duke 390.

As luck would have it, the weather was pretty awful on the day of our trip, but we persevered and took the flat B roads from the distillery, through Annan and along the Solway coast to Eastriggs.

The museum is brand-new and very compact but, like all good museums, has something for everyone – and the story of the munitions factory is remarkable.

Prior to its construction the area was one of pastoral agriculture, with the hamlet of Dornock at one end and Gretna at the other. When the men from the Ministry of Munitions arrived in 1915, a nine-mile stretch of land was bought up, and construction commenced with the sweat of thousands of Irish navvies.

The town of Gretna was transformed and expanded, and new accommodation built for the 30,000 workers (most single women) brought into the area to make the Devil’s Porridge. Even now, much of Gretna has that south-of-England-army-barracks look, with formulaic red-brick housing blocks.

By 1917, the factory was producing 1,100 tons of cordite a week, more than every other munitions plant in Britain combined. But, with so many navvies involved, how on earth was their drinking controlled? Enter David Lloyd George and the State Management Scheme (SMS).

From 1916, this effectively nationalised all the public houses in the Carlisle and Gretna area (along with the Cromarty Firth and Enfield), meaning that production of and access to alcohol was restricted and controlled. A policy of ‘No Treating’ also operated until 1919, prohibiting the buying of rounds of drinks.

The Carlisle and Gretna SMS endured, remarkably, for 55 years, until Ted Heath’s government sold off its assets in 1971.

The munitions factory, however, simply disappeared after the war, with much of the land reclaimed for farming. Some remnants remain on the coast south of Eastriggs, but there are few other clues to its existence, other than the museum.

From The Devil’s Porridge we headed east to Gretna, then on to Longtown to pick up the A7 north along the River Esk. Malcolm was struggling with a visor problem, riding slowly behind me as we approached Langholm on the new stretch of road which has replaced the one that Disraeli once described as ‘unequalled’ in all his travels.

Just as the road slows through the woods and approaches Skipper’s Bridge, the old Langholm Distillery appears on the far side of the Esk.

Much of what remains is original as the distillery was hemmed in between the Esk, the road and the railway, which has long since gone. Expansion was limited, so what you see today is pretty much what was developed in the 19th century.

As it is: Langholm distillery today (Photo: Neil Wilson)

Part of the distillery to the north and some warehouses to the south are gone but, for over a century and a half, Langholm was Scotland’s oldest working distillery, founded in 1765.

For a short spell between 1795 and 1818 it operated as a paper mill until John Arnott restored it. Various operators tried to make a go of it, with the Connell family spending nearly a century in ownership.

The war that created the Devil’s Porridge and helped Gretna flourish finished Langholm as a distillery. Production ceased in 1917, closure came in 1921 and, after the site was sold off in 1926, Mr Penfold of Brampton demolished part of the structure.

The rest was converted into a commercial garage, petrol station and some domestic dwellings. We peer into the extensive garage space, now eerily silent but still used as storage. At least much of Langholm Distillery is still standing; the fate of Glen Tarras was less favourable.

We mount up and head back to Skipper’s Bridge, turning off just before the bridge and staying on the east bank of the Esk. The road is in poor repair, so the KTM’s nimbleness – compared to the heft of Malcolm’s 160mph Ducati – is welcome when potholes have to be avoided.

In a few miles, at the bridge over the Tarras Water, we turn left abruptly and arrive almost immediately at a row of distillery workers’ cottages, all in good repair and all occupied. Beyond them is an area between the hill flank and the Tarras Water which is mostly overgrown, wooded and wild.

A drive runs through this to the old exciseman’s house at the other end of the site, about 100 metres away. We park up and wander into the undergrowth. I notice slabs of concrete aggregate jutting out of the ground and other hints to what was once here.

At the entrance to the excise house gardens, I turn towards the hill and my eyes come to rest on the massive masonry blocks that once constituted the end of the distillery proper.

Lost in time: Glen Tarras distillery, just prior to closure in 1910

Between these walls and the workers’ cottages at the far end the distillery sprawled, active from around 1840 until 1910, when it closed with all stock sold off by 1914.

A year later, the Gretna navvies arrived and, after another, the Devil’s Porridge munitions workers, all travelling via the North British Railway siding at Tarras Viaduct about a quarter-mile distant, down to the factory and back at night.

Mr Penfold’s obliteration was almost total and, without some specialist knowledge, you could walk through the entire site and not know what stood here. But other remnants cast more light on Glen Tarras.

The late Arthur Armstrong once lived in the exciseman’s house, because his father came up from Yorkshire in 1910 to organise the dispersal of the stock. He stayed on and bought the house in 1930, which Arthur inherited.

With it came a number of old distillery notebooks and manuals from 1876-98, shedding much light on the day-to-day running of a Victorian distillery. After Arthur’s death, the books were donated to the Dumfries and Galloway Archives and can still be viewed.

It’s time to head back, so we fire up and head over the moors through Thomas Telford’s birthplace at Bentpath, to Eskdalemuir and past Boreland, near where I spent my teenage years, and it is here that I part from Malcolm to go over the Windshield hills to Moffat.

Malcolm keeps on down Dryfesdale through Lockerbie and back to his marvellous distillery, which may have slumbered for over 90 years, but is once again awake and bringing distilling back to Dumfriesshire.

Neil and Malcolm’s biking route took them from Annandale Distillery down the B722 into Annan and along the B721 to Eastriggs.

Then on the same road to Gretna, picking up the A6071 to Longtown, where they turned left onto the A7 to Canonbie and Langholm.

They returned via the B709 to Eskdalemuir, then the B723 to Boreland, where Malcolm continued on to Lockerbie and Annan.

Neil turned off south of Boreland and continued on the B723 to Wamphray, then headed north on the Old Carlisle Road into Moffat.

NEIL AND MALCOLM RECOMMEND THE FOLLOWING: