The icy Mint Julep is often considered the most refreshing whisky cocktail, perfect for cooling off in sweltering summer temperatures. As the mercury rises, Jake Emen uncovers its 200-year history, and how to make the ultimate Julep. 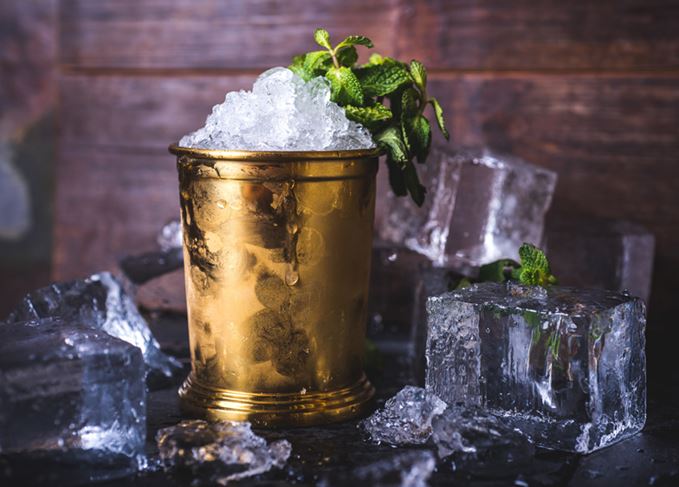 Pound for pound — or kilo for kilo, as the case may be — a proper Mint Julep might be the most refreshing alcoholic libation on the planet. Bourbon, mint, sparkling water, sugar and ice... so much wonderfully cooling crushed ice. On a hot summer day, with sweat dripping down your brow, the jolt provided by the icy-cold concoction provides the ultimate antidote.

That fact was so intrinsically true that the initial popularity of the drink was at least partially responsible for the widespread adaptation of ice in cocktails in the early 1800s. Today the Mint Julep has become synonymous with the Kentucky Derby, where more than 120,000 servings are sold each year to its fancily-clad patrons.

The following recipe comes from Jim Hewes, who’s been tending the Round Robin Bar at The Willard InterContinental in Washington, DC for the past 33 years.

Method:
‘A great Mint Julep all comes down to technique and the ice used,’ Hewes explains.

To perfect the craft, begin by gently stirring the mint leaves, sugar, half the Bourbon and a splash of water in the bottom of a pilsner glass. ‘Why stir? By stirring you are gently bruising the mint, aiding in the release of the mint oils,’ Hewes says. ‘The sugar is acting as an abrasive agent. While you can muddle in the true sense of the technique, you have to be careful as you can overdue it.’

Add half a cup of crushed ice, and stir once more. Top the glass with more crushed ice, packing it down. Pour in the remaining Bourbon and another splash of sparkling water. Garnish with a sprig of mint, a dusting of sugar and, optionally, a lemon twist.

Early roots: The Round Robin bar at the Willard InterContinental Hotel in Washington, DC can trace its Mint Julep recipe to the 1830s (Photo: Michael Kleinberg)

History of the Mint Julep

Hewes has become the modern gatekeeper of the Mint Julep. Standing in the middle of the circular bar at the aptly-named Round Robin, he can trace a direct lineage of the recipe he uses and the one Henry Clay, a US senator from Kentucky, introduced to the bar and its thirsty politician patrons in the 1830s.

‘My Mint Julep is the same recipe that Henry Clay would have used to make a Mint Julep for somebody back in the early 1800s,’ Hewes says.

That recipe is available online via a diary entry of Clay’s, shared by publisher University Press of Kentucky:

‘The mint leaves, fresh and tender, should be pressed against a coin-silver goblet with the back of a silver spoon. Only bruise the leaves gently and then remove them from the goblet. Half fill with cracked ice. Mellow Bourbon, aged in oaken barrels, is poured from the jigger and allowed to slide slowly through the cracked ice.

‘In another receptacle, granulated sugar is slowly mixed into chilled limestone water to make a silvery mixture as smooth as some rare Egyptian oil, then poured on top of the ice. While beads of moisture gather on the burnished exterior of the silver goblet, garnish the brim of the goblet with the choicest sprigs of mint.’

That’s not to say Clay came up with the drink, however, as is commonly cited. Nicknamed in the political sphere as ‘The Great Compromiser’, perhaps Clay’s key contribution, as a good Kentuckian, was ensuring that Bourbon became the drink’s lasting spirit of choice as opposed to brandy, rum or gin.

Clay does call out for a ‘coin-silver goblet’ and silver spoon for serving the julep, and such ornate presentations, with silver or pewter mugs, have typically remained the norm. While all the better to create that nice, frosted exterior for an extra-chilled effect, it’s by no means a requirement, even if it is tradition. Hewes, for his part, prefers simple glassware to more directly highlight the flavours of the drink.

Break from tradition: Jim Hewes prefers to use glassware when making a Mint Julep

One Orsamus Willard, who cocktail historian David Wondrich notes in his book Imbibe! as being perhaps the first celebrity bartender, had already popularised the drink at the City Hotel in New York. Willard was known alternately as the ‘Napoleon of Bar-Keepers’, and ‘Willard of the City Hotel’, while his connection via the Mint Julep to Washington, DC’s Willard Hotel is merely coincidental.

The story as Willard told it, was that a man from Virginia taught him the recipe for an iced Mint Julep in 1817. With Willard's deft hands deployed in serving the drink, it became one of the first widespread bar-world successes, and is credited along with the Sherry Cobbler as making ice a mandatory stocking item for bars.

Before ice became accessible, un-iced versions were said to be made in Virginia as far back as when the state was still a colony. The cooling factor of the ice though is what launched the Mint Julep into the stratosphere. Perhaps spurred by Clay's nudging, Kentucky Bourbon became its rightful spirituous backbone.

Alas, even this author’s theory of the Mint Julep reaching the pinnacle of refreshing revelry isn’t a new one. Wondrich cites English author Frances Trollope, who published a book in 1832 about her travels through America, and later said of the Mint Julep that ‘...it would, I truly believe, be utterly impossible for the art of man to administer anything so likely to restore them from the overwhelming effects of heat and fatigue’.

As for its place in Kentucky Derby culture, the Mint Julep became known as the ‘official drink’ of the annual horse race in 1938. It seems a fitting match – a refreshing Southern specialty calling for the spirit of the state, Kentucky Bourbon, with origins in neighbouring Virginia, served to revellers as the May weather begins to offer its potent heat and humidity.

For a drink that’s been around for well over 200 years, a ‘modern’ twist could be anything from the past few decades or since the end of Prohibition, even. Hewes’s usage of sparkling water, for instance, along with a lemon twist, diverge from a strict interpretation of Clay’s diary recipe.

Many today also opt for simple syrup in place of sugar, and considering that a touch of water is called for in any event, it’s a logical enough move. Though if you’re simply making a round of drinks at home, it’s quicker to stir in sugar than it is to make and cool a batch of syrup.

Minted Julep: Woodford Reserve donates a portion of its $1,000 cocktail to charity

The cost of the drink is thanks to its snazzy collectible glassware, and proceeds are donated to charity. Woodford Reserve is now the title sponsor of the Kentucky Derby, and as such offers a Julep rendition annually at the race. The recipe can be used at home, though thankfully with a lower price of admission.

*The recipe calls for Kentucky-based Hosey honey, which Woodford then aged in an oak barrel kept inside the famous Twin Spires of Churchill Downs racetrack. At home, any honey should suffice.

Method:
Rub mint around the julep cup, expressing the essential oils, and place the mint leaves in the bottom of the cup. Drizzle in two bar spoons of honey sweetener, followed by the Bourbon, mixing the ingredients together. Pack crushed ice on top, followed by a sipping straw [we recommend a reusable or paper straw]. Layer loose ice on top, with another splash of Bourbon to settle the drink. Garnish with shaved honeycomb and a sprig of mint.

Southern refreshment: The Kentucky Derby made the Mint Julep its ‘official drink’ in 1938

‘Since honey is a common flavour that can be experienced in a glass of Woodford Reserve on any given day, it is an easy substitute for a traditional sweetener, such as simple syrup,’ says Elizabeth McCall, Woodford’s assistant master distiller.

The honey also provides a boost courtesy of a few extra layers of flavour not typically found in the drink. ‘The honey adds depth and complexity such as floral, citrus and brown spices,’ McCall says.

The initial idea for this year’s spruced-up recipe from Woodford came by glancing at the Bourbon brand's own flavour wheel. ‘I just look to our flavour wheel for inspiration,’ McCall says. ‘I also like to look to my surroundings for local flavour inspiration.

‘With this year's Mint Julep, we have leveraged the flavours of Kentucky for our alterations. We’re using local Kentucky honey, and mint grown at Churchill Downs – and both honey and mint are found on our flavour wheel.’