If you’re in the mood for a horror movie scream-fest this Halloween, switch on one of these classics, hide behind the biggest cushion you can find and clutch a complementary dram to heighten the scares. By Joe Rogers. 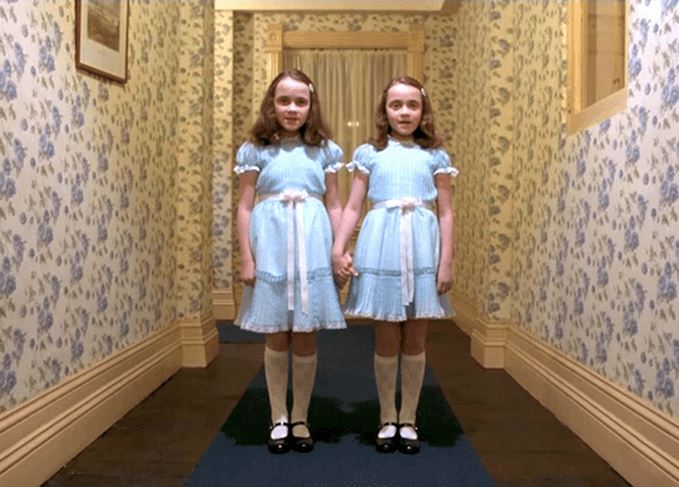 Hello Danny: The Grady twins got you spooked? Best make it a double. 'Come play with us...'

Matching food and drink with films can be a lot of fun. Think eating pasta and meat sauce with Ray Liotta in Goodfellas, or drinking $5 shakes along to Pulp Fiction. But a great pairing doesn’t necessarily have to be from the film – like Hannibal Lecter’s Chianti, say – it can play on something sensory or thematic to help get you in the mood. Imagine slurping on a bright red Blood and Sand while Dracula (pick your favourite) tears into someone’s neck, or downing a Zombie cocktail with the actual voodoo undead in White Zombie. As it’s spooky season, here are five classic horror and whisky pairings for your Halloween enjoyment.

Fire and Brimstone: Sip on Balcones’ smoky whiskey to bring those murderous chainsaw scenes to life

The film:
Over four weeks, with a non-existent budget, and a terrifying movie-monster, director Tobe Hooper made his mark on film history. The oft-rehashed formula – road trip, hitchhiker, wrong turn, murderous bumpkins – will be familiar to you even if you haven’t seen the original. But Texas Chainsaw retains a punk creativity that has proved hard to replicate. Sunspots, urban/rural tension, the spectre of history, taxidermy, and swarming spiders are all utilised to make sure you’re terrified before Leatherface even shows whoever’s face that is. The film makes a great case that civilisation is a fragile thing that is easily broken. And eaten.

The whisky:
It’ll have to be a Texan whiskey, with a little Tobe Hooper inventiveness, drunk from a human skull… or at least two of the above, anyway. Enter Brimstone, from upstart distiller Balcones. This corn whiskey is smoked with ‘sun-baked Texas scrub oak using our own secret process’. An earthy, sweet, smoky sipper that’s just the thing to evoke those hot and sweaty Texan vistas.

Drink when:
Leatherface first fires up the saw to dismember poor old Kirk – recently dispatched – while Pam – recently meathooked – watches in horror. The smell of that burning scrub oak will put you right in the room with the smoke-spewing saw… in a good way. Also, make sure you save a few drams for the iconic dinner table scene in the final act, so you can raise one to Grandpa Sawyer.

Sadako’s curse: If you're brave enough to watch Ring, maybe ditch the VHS and stick to Netflix

The whisky:
If Texas Chainsaw is about oppressive heat, Ring is about cold and darkness and Japan. The perfect complement, a Hakushu Highball with lots of ice, soda, and a little cucumber. Hakushu malts have a mysterious elegance that perfectly suits the chilly otherworld of Ring.

Drink when:
It would be easy to say when Sadako climbs out of the television, but you’ll probably be too scared for whisky. Instead, savour the woodland notes of your Highball as Reiko and Ryuji search for Sadako’s resting place on forested Izu Ōshima island.

Gory Goldblum: Afraid? Very afraid? Steady yourself with a dram, preferably a stiff one

The film:
Director David Cronenberg uses a ‘50s B-movie as the jumping off point for this body horror tour-de-force in which Jeff Goldblum plays a scientist attempting to simultaneously crack human teleportation, and get it together with Geena Davis. Things go south for Goldblum when he tests the technology on himself and accidently shares a telepod with a fly, resulting in crucial DNA mix-up. Jeff undergoes a metamorphosis that sees him lose his fingernails, puke stomach acid, and ultimately go all grim and man-fly about it. It’s a superb take on the age-old mad scientist narrative spliced with 1980s allegory.

The whisky:
It’s got to be something blended, right? Try Elements of Islay Peat. The Full Proof version should be enough to steady you during the, shall we say, oozier transformation scenes. Also, the styling is right on theme, drawing inspiration straight from the laboratory. Just the thing to accompany a spot of scientific hubris.

Drink when:
Oh god, the maggot baby scene? The emergence of full man-fly? You could even play a very Cronenberg drinking game and take a slug every time something falls off Jeff. There’s also smell-o-vision fun to be had with the meaty peat smoke and those mist-covered teleportation scenes.

All work...: Chill out this Halloween with Jack and an icy cold Mizuwari

The film:
This Stephen King adaptation is notable for Stanley Kubrick’s haunting visuals (that’s right) and liberal use of Jack Nicholson. Our Jack is an author who takes a winter caretaker job at the isolated Overlook Hotel where he hopes to spend time with his wife and son and beat writer’s block. Only the hotel was built on an ‘Indian burial ground’, the son is psychic, and spooky goings on around the labyrinthine premises start to mirror Jack’s inner demons. How spooky, you ask? Bleeding lifts, ghost bartenders, metaphorical hedge mazes, advocaat, and double the number of little girl ghosts there are in Ring.

The Shining is often called the scariest film ever made. It’s a true standout in the horror genre and the broader history of film.

The whisky:
Pair the Shining with whisky from a deceased distillery and enjoy communing with places demolished, stills removed, and people long passed. The Johnnie Walker Ghost and Rare series offers a (relatively) accessible way to taste whiskies from dead distilleries. The first edition featured malt from the legendary Brora and grain from Cambus, both deceased. Take a sip and glimpse spirits from another time. For a more affordable option, try the new Johnnie Walker White Walker. Yes, it’s a fantasy tie-in with Game of Thrones, not a horror; but straight from the freezer it’ll go nicely with those terrifying, winter shots of the Overlook.

Drink when:
The iconic ‘Here’s Johnnie!’ moment provides an obvious cue to drain your tumbler. You might also want to have a frosty Mizuwari, with ice ball and water, during the climactic hedge maze chase for full sensory immersion. But the best time to guzzle in fear is when Jack meets his ghostly predecessor and we learn just how F’d he is: ‘You’ve always been the caretaker. I should know, sir. I’ve always been here.’ He’s drinking JD just before, but your JW will do perfectly.

Scottish sacrifice: How Islay whisky really gets its smoky flavours

The film:
Police Sergeant Edward Woodward treks to Summerisle in the Hebrides to investigate the disappearance of a child. The unhelpful islanders mostly sport accents and visages we might call monstrously regional. However, there is the odd Britt Ekland and Christopher Lee knocking around as well. They all practice a weird religion, sing occult folk songs, and totally shag, which our god-bothering hero just hates. Eddy deduces that the kid’s disappearance has something to do with upcoming May Day celebrations and a plot to ensure a successful harvest/placate the zealots. Things go very poorly for him from there. Like, blood sacrifice poorly.

The whisky:
What better for a sinister Hebridean horror than a sinister Hebridean whisky like Bruichladdich Black Art 6.1? This occult-y malt promises rich fruit on the palate, including berries, figs, and apple. The perfect accompaniment for all that spooky fertility and rebirth chat. Fittingly, there’s also some arcane goings on with its composition – usually transparent head distiller Adam Hannett is tight lipped about the casks used, the exact recipe, or what dark powers he consulted in its making. It is arcane-ness, that gothic sense of unknowing, that fuels much of the horror in The Wicker Man. Is Adam walking the left-hand path? Seems likely.

Drink when:
You should really join Edward when he necks a whisky to calm his nerves. But the real down-your-drink moment comes as he is dragged up the hill at the end. We see the realisation on his face and then, the wicker man. We knew it was coming, but it’s still terrifying. Grotesque. Far worse than it looked on the poster.

For a moment, we don’t believe that the film will do this to Edward and to us. Our hero clutches at the narratives he believes will protect him; his faith in the rule of law, his Christianity. But there are dark, indifferent forces at work here, and they have other plans. Yeah, that’s right. Drink up, mate.