The world’s most famous cross-dressing comedian and ultra-marathon runner is no stranger to taking on a serious acting role, his latest being the fearsome Captain Waggett in the ‘re-imagining’ of Compton Mackenzie’s Whisky Galore! Charles MacLean caught up with Eddie Izzard at the film’s premiere at the Edinburgh Film Festival. 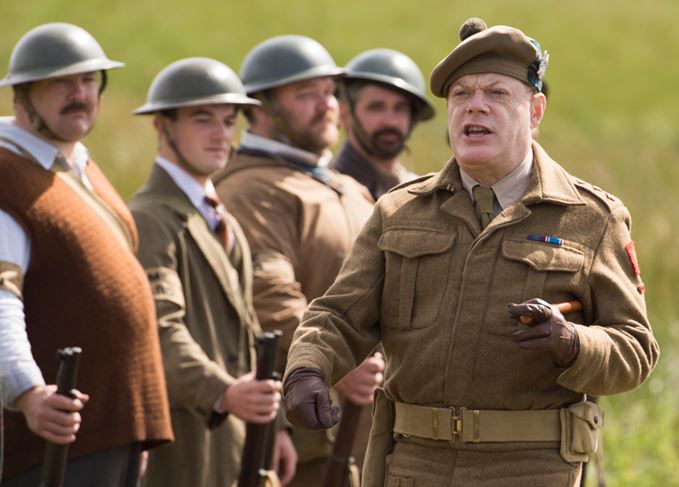 Eddie Izzard is commanding as the domineering Captain Waggett

Eddie Izzard was not in drag when I met him, although he was wearing diamond ear-studs and had brightly painted fingernails.

He is famous for his surreal sense of humour, his common sense and humanity, his ‘rambling, whimsical monologues and self-referential pantomime’ (to quote his Wikipedia entry). He acknowledges the influence of Monty Python and Billy Connolly. Earlier this year he made news by running 27 marathons in 27 days in South Africa (in temperatures over 40°C!) and touring his Force Majeure show – three consecutive hours of comedy in German, French and English – in support of the Stronger in Europe campaign. The Independent describes him as ‘Fearless, original and very, very funny’.

But is he the right choice to play Captain Waggett in the ‘remake’ of Whisky Galore!?

I should explain that Waggett, a key character in the film, is a retired English stockbroker who has bought the local ‘big house’ and rented the shooting on the island. He is also the officer in command of the island’s Home Guard unit, which he despairs of ever knocking into shape on account of ‘West Highland casualness’. Self-important and priggish, he feels himself to be superior to the locals and advises his wife not to ‘go native’.

We are introduced to him (in the book by Compton Mackenzie, not the film) going to bed with a Hot Toddy. His wife remarks on the shortage of whisky on the island, and suggests he might share his last bottle with the minister, to which Waggett replies: ‘They must learn not to be improvident. Improvidence is the besetting sin of the Islands. If they had all the whisky on Scotland, do you think they would be able to keep it? No, no, they’d drink it as fast as they could.’

Rudely, I asked Izzard why he wanted to play such a prat. His reply was enlightening:

‘Superficially a prat, maybe. But think yourself into his position. He is a soldier, but is stuck on a remote island well away from the action, frustrated not to be killing Germans and feeling that he has been “passed over” with no hope of promotion.

‘He is perjink, to use a Scots word [I had to look this up: it means “prim”, “finical”], a stickler for duty. He does everything by the book; wants to make his unit the best, but is frustrated by their easy-going attitude – which he cannot understand. We are at war, after all. And meanwhile the locals run rings around him; for them he is a figure of fun.

‘I make a very clear distinction between my dramatic work and my comedic work. I don’t ad-lib my dramatic lines. As part of getting “into character”, I consider my character’s backstory carefully. I want to make him three-dimensional, credible. I was particularly interested in Waggett’s relationship with his wife – typical of the period, but loving, open and loyal. She has the measure of the man and is not unaware of his failings, but still stands by him.’

The chase is on: Izzard's Captain Waggett is determined to track down the stolen whisky

In my earlier interview with Gillies MacKinnon, the film’s director, I had asked him about the choice of Eddie Izzard for the role. He told me he had worked with Eddie on the TV drama about Robert Watson-Watt, the inventor of radar (Castles in the Sky, 2014) and knew he could combine seriousness with humour. ‘I want the audience to be sympathetic to Waggett, to feel a bit sorry for him, not just to write him off as “the villain of the piece”,’ he explained.

‘I also knew that Eddie had been an officer cadet at school, and had once thought of joining the army. He has a deep interest in World War II. I knew he’d be right for the part, and when I saw a school photo of him as a drummer in the Cadet Force band, I couldn’t resist inserting a tiny scene of Eddie playing a side-drum!’

At the end of our interview Eddie said to me seriously: ‘Although our Whisky Galore! is officially a comedy, actually it’s a folk tale. The bottom line of drama is to be truthful to both the character and the situation. I play Captain Waggett as a dramatic role, not for laughs or surreal effect!’

I did not mention to him that I might have been offered his part. After my cameo role as Rory McAllistair in The Angels’ Share, a friend who knew Ian MacLean, the producer and deus ex machina of Whisky Galore!, thought I would make a good Captain Waggett. I’m still not sure whether to be flattered or embarrassed by this – I think it was to do with my moustache – nor did I ask Mr. MacLean if he had turned me down.