The psychology of whisky collecting

Stamps, coins, stickers, and now whisky… what is it about memorabilia that makes us want to collect it? Tom Bruce-Gardyne explores the psychology behind whisky collecting, and that slippery slope from part-time hobby to serious investment. 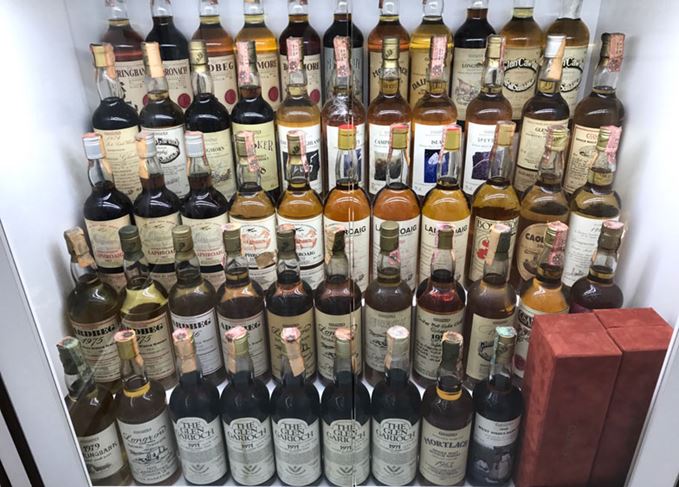 Treasure trove: Collectors tend to amass their whiskies around one distillery or independent bottler

Evolutionary theorists suggest a collection was a way for a man to attract potential mates by signalling his ability to accumulate resources. Well, it may have worked for our Stone Age ancestors, but somehow a stash of old stamps, vintage comics or bottles of Macallan Fine & Rare wouldn’t have much pulling power these days, you’d imagine. In the words of theartofmanliness.com in its 2016 Ultimate List of Hobbies for Men, ‘Collecting is something a lot of men love and most women just don’t get’.

‘The reaction I get when people find out I’m a coin collector isn’t great. It’s definitely not much of a conversation starter,’ Mackenzie Crook, the actor and creator of BBC Four’s much-loved sitcom The Detectorists, told The Observer. But as he went on to explain: ‘It’s a personal, private thing. It’s something for myself, unless I meet a fellow numismatist, like my dad. Then we will talk passionately about it for hours.’

The advice of author and inveterate collector Hunter Davies to ‘never collect for investment,’ is routinely ignored by whisky collectors. Many will have made a similar journey to Andy Simpson, co-founder of Rare Whisky 101, who progressed from whisky drinker to collector by ‘buying one to drink and one to keep, and inadvertently becoming an investor’. He warns investment clients with rare bottles about ‘the double D’ – as in, don’t drink it or drop it.

Yet the whole secondary market sits on the three-legged stool of drinkers, collectors and investors, with the latter reliant on the other two. If rare whisky becomes too expensive to drink or collect, the whole stool will collapse. There is not a whisky collector who doesn’t bemoan the soaring prices at auction and from the producers themselves. The Ardbeg aficionado, Geert Bero, suggests that distillers should sell some rare bottles opened and unsealed just for drinking. It’s a nice idea but I doubt it’s a top priority at Macallan HQ.

Quiet reflection: Diego Sandrin takes the time to sit and admire his own whisky collection

Because so many bottles are bought for re-selling, Bero has learned to relax at auctions. ‘In the old days I felt I had to get it on the day itself,’ he says. ‘Now I say: “why panic, it’ll come along again”. Some bottles I missed I went a long way to find, but then I just stopped and said: “it’s only a bottle of whisky. It’s only distilled barley.”’ That sounds a very healthy attitude. By contrast, any speculator betting on the rising price of rare whisky will have heard the glib advice that ‘you can always drink your investment if the value falls’. For your average bottle flipper, the taste of that financial loss would really stick in the throat.

‘When you drink a whisky, that’s when it comes alive and that’s when it dies,’ says Italian collector Diego Sandrin, who admits that some of his bottles may have become too precious to ever open. ‘I would never sell my collection, but my kids can do what they want when I’m gone. I’m sure it will be a lot of help to them.’ The desire to leave a legacy and something solid that will outlive you is thought to be a common psychological motive for collecting things, as is the simple pleasure of possession. ‘I could not even imagine not looking at my bottles,’ says Sandrin. ‘For me it’s therapy. Whenever I’ve had a hard day, I just sit there and go through the bottles and remember where I got each one.’

Innkeeper and inveterate Port Ellen collector, Jon Beach, says: ‘It was always something I did on the sly. Obviously, being married with a young family, I couldn’t go throwing money at bottles.’ Sometimes he gets carried away, and sometimes finds it hard to follow his own advice on online auctions – make your bid, and walk away. ‘With the phased shut down on these auctions you go back and see that “oh, it’s still live … and oh, it’s an extra £10”’, he says. ‘So it does take quite a bit of self-restraint.’ Here, the psychology appears similar to gambling, but Andy Simpson insists that only applies if you are investing. ‘For a collector it’s not a gamble,’ he says. ‘It’s the pleasure of owning and collecting that set.’

Personal joy: Publican Jon Beach would keep his love of whisky collecting to himself

But when it comes to tracking down a full set of whisky that old saying of ‘it’s better to travel than arrive’ certainly seems to apply. Well, it does for Sandrin who says: ‘I collect the Italian bottler Samaroli and whenever I see one I haven’t got it brings me alive a little bit. If I thought I’d got to the end, then the game is over.’ Having collected all Ardbeg’s official bottlings, Geert Bero has moved on to those of the Scotch Malt Whisky Society. ‘So far, I’m missing 20 bottles,’ he says. ‘It is a journey, but it’s very hard.’ Driving him on, he happily concedes, is the thrill of the chase.

This hunting instinct is clearly part of the psychology of collecting. ‘For men in particular,’ wrote the American academic, Steven Gelber, ‘the image of the hunt as both a search for game and as a form of game, imbued collecting with an air of masculinity that legitimised it as an expression of superiority in a Darwinian world.’ Unfortunately, as discussed above, such alleged superiority would be lost on most women. To put it crudely, that shedload of old whisky ain’t no babe magnet. Indeed if the collection gets out of control it could have the opposite effect.

‘You either shelve out your spare bedroom and your wife divorces you, or you put your duplicate bottles in professional storage,’ says Simpson. ‘Or, if you find yourself in bed cuddling a bottle rather than your wife, that’s even worse,’ adds Bero. For a psychologist, the dark side of collecting would be when it slips into hoarding, but so long as you are out there breaking open bottles with kindred spirits you have little to fear. ‘The sheer pleasure of people enjoying a whisky that was distilled 30-40 years ago is amazing,’ says Bero. ‘Even if it’s the last bottle, so be it. That’s what it was made for.’