It was a whisky tasting that started as any other, but ended with Geert Bero embarking upon a journey to acquire as many rare and (almost) one-of-a-kind Ardbeg bottlings as humanly possible. He speaks to Angus MacRaild about discovering the Rare Malts, his ‘holy grail’ dram of choice and the ‘greatest’ whisky experience of his life. 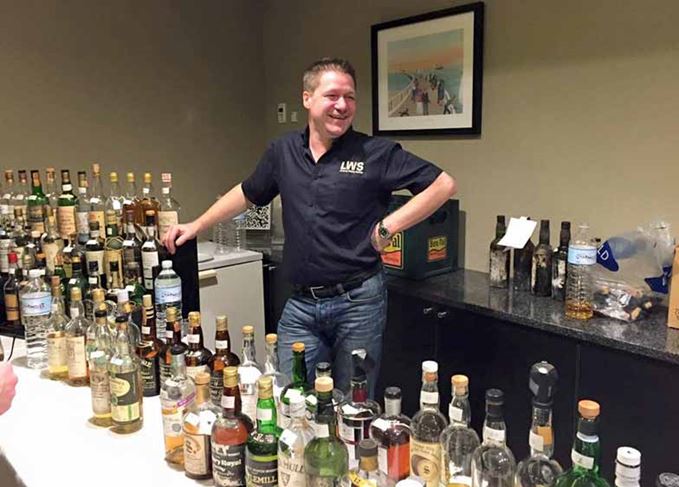 Pride of place: Geert Bero is passionate about his extensive Ardbeg collection

Who are you and what do you do?
‘My name is Geert Bero, I was born and raised in Belgium (vintage 1973) and I live in Stockholm Sweden. My job is running the Hotel Bero in Oostende, Belgium, where of course we have a well stocked whisky bar and where the notorious Lindores Whiskyfest gatherings take place.’

What whisky do you collect and why?
‘At first I gathered some rare malts bottled prior to 1999/2000, but in a tasting I discovered a single cask Ardbeg from the 1970s. Lightning struck and I did not look back; the taste to me was so different to all the whiskies I’d tried before. I started looking for bottles and discovered that they did other single casks, so I tried to find them all… and I did.’

How did you come to love whisky?
‘When we needed to refurbish the bar of the hotel we had several ideas: a lounge bar, a sports bar, an Irish pub, but then I thought why not a whisky bar? I had never tried single malt before; I had a whisky and cola now and then in the pub with my friends. I was around 25 years old when I went to my first single malt whisky tasting to see how it was made and how it tasted, so I would have some more knowledge about the “water of life” for the bar. The first one I tried was Oban 14 and the taste of it was incredible. I went to look for single malts in shops all over Belgium, as it was not that popular back then. I bought a couple of different ones and that started it.’

When did you transition from enjoying whisky to collecting it as well?
‘It started quite early, as the guy giving my first whisky tasting said: “Try to find Port Ellen, buy a bottle, try it and if you like it, buy more because it will never come back.” That is how I discovered the Rare Malts series as that one was the only one I found in Belgium. I then started buying in Germany, as there was a shop there that shipped the whisky to Belgium. They had other Rare Malts and that’s how I found Brora 1972. This was really before the internet exploded; the orders were by fax. I still have all the paperwork – such great prices back then. I also discovered Mara Whisky Shop then, aka “Alibaba’s cave”, now sadly gone.’

Room for one more?: Bero is pressed for space to store his extensive Ardbeg collection

How has collecting impacted the rest of your life?
‘Well, you need a lot of space, and back then it was still affordable. Nowadays, I try to swap for other bottles if that is possible – new whisky is outrageously expensive for mediocre stuff. My wife likes old Ardbeg; her favourite was the 10-year-old black label/white letters from the early seventies – she knows what she wants. She also likes Laphroaig 10 Rotation 1967. I believe I did a good job with her.’

The character of Ardbeg has changed over the years. What era of its production do you enjoy the most?
‘Of course, like everybody who ever tried early 1970s Ardbeg, 1972 and 1974 are amazing. The peatiness, the structure and that thing I cannot describe – when you drink it there is this little voice in your head that says: “Yes! Bam, this is it.” But I really like the older ones from time to time. Ones from the 1960s – and even the 1950s – have another dimension to them, a bit of a dirty style. Now people want liquid peat in their glass, but they've never tried an old Ardbeg. The peat was mellow and not much like today’s whisky where it is used as a USP. They just needed it to dry the malt and it became peaty, but not fiercely so like now.’

Has the changing character influenced your approach to collecting?
‘Oh yes. In the old days you could buy a 1972 Douglas Laing bottle for €110 or less, or a single cask OB from the 1970s for €170. I am not jumping now to buy a case of Perpetuum.’

What, in your opinion, made the old Ardbegs so distinct from the other Islay malts of the time?
‘There was not a lot of difference between the distilleries on Islay in the 1960s/70s – Laphroaig, Lagavulin, Caol Ila, Bowmore, Port Ellen. Staying with the real peaty ones, all of them had great stuff at the time and of course they had bad ones but far fewer. What distinguished them from today’s malt? It’s a big guess but production process, long fermentation and each had their own yeast; that’s my point of view.’

In recent years, Ardbeg's approach to its marketing and bottlings has changed. What do you think of the direction it has taken?
‘No comment. Or maybe one thing: you cannot drink the packaging or marketing. But you can drink a glass of 1972 cask X at 25 years old. Those were bottled in the days before fancy names and stories. My view on whisky and how I run my business: keep it simple.’

The prices for old Ardbeg – and many great old whiskies – are now very high. Has this affected how you collect or buy whisky?
‘I am glad I stocked up quite well since the beginning when prices where OK. Now I try to swap bottles if I am missing one, but now and again you have to show hard cash. Once in a while you get lucky and you find an old stash, or a bottle at an affordable price. I definitely buy less whisky than before though.’

What do you think of today's Scotch whisky industry and the products produced?
‘They have gone nuts with the prices, packaging, names etc. Quality in general has gone down, a few examples being Macallan, Highland Park, even Ardbeg 10 – you just have to try an old bottle from 15 years ago to see it’s another world. But almost all the distilleries have lost that loving feeling; there are a few that really still bring out good stuff. Names jumping to my mind are Springbank, Bowmore and Glenfarclas.’

From a drinking perspective, what would you consider to be the top three Ardbegs ever bottled?
‘The three best Ardbegs I’ve tried? Difficult, I’ve tried so many good ones…
1: Ardbeg 1959 25 Years Old Cadenhead Dumpy
2: Ardbeg 1967 Signatory Pale Oloroso Cask 575
3: Ardbeg 1976 Cask 2392 OB for Fèis Ìle 2002
But there are so many great old ones, I recently opened Signatory Ardbeg 1972 cask 3444 for the third time – amazing dram. I must like it looking at the two empty ones…’

What are the most prized bottles in your collection?
‘That is the President’s decanter. It is a single cask Ardbeg OB and only two decanters were bottled for charity. I was lucky to buy bottle number one in the charity auction.’

What would be your 'holy grail' bottle/bottles to find?
‘One of the old bottles of Ardbeg OB for the US market, bottled in the 1920s/30s. I know of four different versions but only one will do to crack open. Nobody from this whisky era has ever tried this; it would be mind boggling to try such a relic.

What has been the greatest whisky experience of your life?
‘The Islay Odyssey in 2015 was by far the craziest tasting ever held on this planet. Thanks to the generosity of 20 friends bringing their craziest bottles to Islay.’