The ads that made Macallan

Macallan is perhaps the most famous single malt whisky on the planet today – but, 40 years ago, it was barely known outside Speyside. Its transformation from local hero to global powerhouse was kickstarted by a low-key but exceedingly clever ad campaign. Richard Woodard reports. 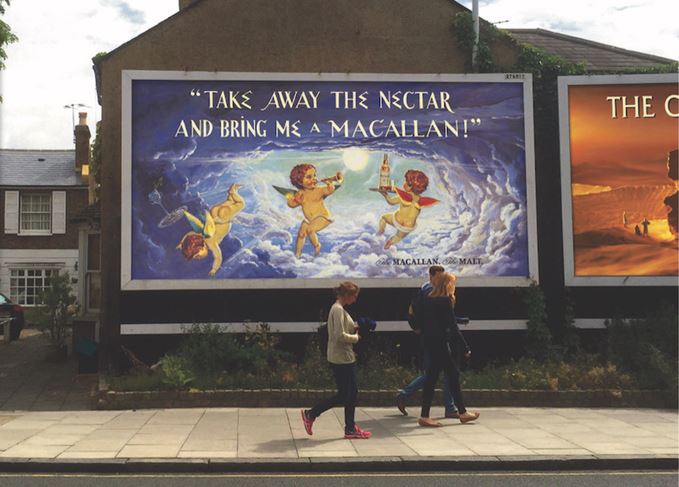 Heavenly creatures: Macallan’s ads in the 1980s and 1990s were highly inventive

Last year, Macallan launched a new global marketing campaign. Costing a reputed US$18m, Make the Call has as its centrepiece a 90-second video in which a shirtless man freefalls from a high mountaintop to his apparent doom, before sprouting wings and soaring triumphantly to safety. ‘Would you risk falling,’ the caption enquires, ‘for the chance to fly?’

In its scope, ambition and production values – not to mention its cost – it says much about a whisky that has evolved from farm distillery by-product to the world’s most lucrative single malt, a luxury lifestyle brand with a new, £140m distillery home. The ad features no swirling glass, no hero bottle shot, no reference to whisky at all bar the mention of the Macallan name at the end.

Forty years earlier, in 1978, Willie Phillips applied for a new job: that of managing director at Macallan. He recalls: ‘I stayed in Elgin overnight and thought I’d better go to the bar and ask for a Macallan so I knew a little bit about it before I went to the interview.

‘I looked everywhere on the bar, but I couldn’t see it. I was very disappointed, because I thought: “Gee whizz, this job might not be what I thought it was.” So I asked the chap behind the bar and it was on the gantry – it was on optic.’

Early work: The Macallan ads were foreshadowed by this beautifully made ‘brochure’

The anecdote says much about the status of Macallan in those days: a blender’s malt, well-regarded on Speyside, little-known beyond its borders. Phillips got the job and became part of a team – alongside Hugh Mitcalfe, who died earlier this year, Frank Newlands and the owners, Allan and Peter Shiach – that was determined to change that.

That marketing was built on the quality and quantity of Macallan’s whisky inventory, as Hugh Mitcalfe later explained. ‘I was amazed,’ he said. ‘There was stock of such quality that you wouldn’t have seen anywhere else in Scotland. It was a marketing person’s dream.’

The communications campaign that followed was foreshadowed in 1973, when the Shiachs had enlisted two advertising executives, art director David Holmes and copywriter Nick Salaman, to design a ‘brochure’ to attract overseas distributors.

The result was The Remarkable History of The Macallan-Glenlivet, a kind of artist’s folio telling the story of the whisky in copperplate writing and watercolour pictures. ‘A piece difficult to toss into the bin,’ as David Holmes, who died last year, wrote in his memoir David Holmes’ Book.

In 1979, Phillips and Mitcalfe went back to Holmes and Salaman, who by this time were working at London ad agency Holmes Knight Ritchie. Mitcalfe’s brief was simple: ‘We want a greater voice than our situation merits.’

Creative pair: Nick Salaman and David Holmes were the driving force of the campaign

Phillips adds: ‘As we talked about what we wanted, I could see their eyes getting brighter and brighter. Then I said: “Your total budget, gentlemen, is £25,000.”’

At the time, that was just about enough to buy a single-page ad in The Sunday Times colour supplement. ‘We chose otherwise,’ wrote Holmes in his memoirs. ‘A more work-intensive, targeted campaign to reach opinion formers.’

The 200-plus ads that followed over the next 16 years broke new ground, both in content and placement: small spaces next to The Times crossword, seen as the perfect spot to catch the eye of Macallan’s target consumers: ‘Quite educated, not stand-offish, who enjoyed a little joke,’ as Salaman describes them.

The ads were witty, quirky and clever, combining Salaman’s verbal dexterity with Holmes’ artistic skill, and his ability to discover and use talented illustrators, including Sara Midda, Carolyn Gowdy, Michael O’Shaughnessy, Brian Grimwood and Axel Sheffler (of The Gruffalo fame).

Early examples, such as A Place Called Macallan and The Snow on Benrinnes… set the scene gently, never overpowering the reader with too much information. ‘They wanted to creep up on the market,’ says Salaman. ‘When you enjoy The Macallan, you’re part of the club. It wasn’t a loud trumpet, but one insistent horn that we blew.’

Many of the best examples came from simple but amusing anecdotes, such as Fetch, featuring a dog called Macallan, A Tale of a Luggy Bonnet and Nae Macallan… Nae Fish. The stories came from the people who worked at the distillery and, in time, from Macallan’s growing army of fans, The Advocates of the Macallan.

There was The Complaint, where a correspondent – later revealed to be Willie Phillips’ brother Jack – bemoaned Macallan’s move to a cork stopper because his surreptitious attempts to sneak a dram could now be overheard.

To the Sherry-woods celebrated May Day and the advent of spring. Salaman recalls: ‘I walked into Chelsea Arts Club and there was [TV newsreader] Reggie Bosanquet with a few friends sitting on high stools at the bar. Then Reggie just called out: “Hooray! Hooray! The 1st of May! Outdoor fucking starts today!” Well, we had to clean it up a bit, so it became “outdoor sipping” instead.’

As time passed, the campaign grew and diversified, including a ‘crossword clue’ that doesn’t mention either Macallan or whisky; the use of photography in No 1 in Dallas, playfully linking the Moray village of that name with Dallas the TV soap; large-format poster ads such as Take Away the Nectar! and The Colossus of Nose (the tiny figures ascending the edifice are Holmes and Salaman) – and even a cinema spot, The Long Sleep, featuring the voices of Brian Blessed as a slumbering cask of Macallan and Miriam Margolyes as an impatiently empty bottle.

Through it all, the inimitable tone of voice remained constant, as did the strapline: ‘The Macallan. The Malt.’ ‘The idea struck us from The Glenlivet,’ remembers Salaman. ‘They were using a kind of slogan of about four lines at the time, and we said: “We’re not going to do that.” The more you talk, the less credible you are.’

‘I remember with the tagline, we went through various options,’ adds Phillips. ‘The Superb Malt; The Wonderful Malt; The Superior Malt. Nick Salaman said: “Why not The Macallan, The Malt?” Well, Hugh [Mitcalfe] immediately jumped on that.’

Not everyone was happy with the switch from Macallan to The Macallan, however. ‘There was a complaint from The Glenlivet,’ recalls Phillips. ‘Hugh was a lawyer, and he wrote back that he didn’t think anywhere it said that you could register the trademark of the definite article.’

The whisky too was part of the PR offensive, from the 25-year-old Anniversary Malt to 50-year-old and 60-year-old releases. ‘It was part and parcel of getting the name of Macallan known outside Speyside,’ explains Phillips. ‘Hugh was a marketing genius, because he never, ever exploited those stocks, he used them for Macallan publicity.’

David Holmes’ influence extended beyond the ads; as his son Rupert recalls, he painted the famous watercolour of Macallan’s home, Easter Elchies House, designed numerous labels and packs, and briefed Sir Peter Blake on the label design for the first Macallan 60-year-old, 1926 release – now one of the most sought-after whiskies on the planet. Holmes also designed the tantalus cabinet that houses the bottle.

Meanwhile, the ads themselves are now enjoying a new lease of life, commemorated in an ongoing, 24-part series of Macallan single malt releases known as The Archival Series.

However well-regarded it may be, the true test of any marketing campaign is its ability to sell more of its product. By 1988, Macallan had won The Queen’s Award for Export – an accolade marked by one of Holmes’ and Salaman’s typically wry ads, A Point of Etiquette.

Success brings admirers, and in business they tend to be acquisitive. In 1996, Macallan was bought by Highland Distillers, and the old guard of the Shiachs, Phillips, Mitcalfe and co. were out. A new phase was dawning for Macallan, one of lifestyle and luxury, rather than pithy advertising aimed at an educated but perhaps narrow audience.

In 2018, Macallan opened its astonishing new distillery, a shrine to four decades of success that have utterly transformed what was once the Speyside insider’s single malt. Phillips and Mitcalfe were not invited to the launch party, but Holmes and Salaman were.

‘We had a great time,’ Salaman says. ‘We wore tam o’shanters, and I think they were a little concerned about who we were until we explained that we were the ones who were there at the beginning with those funny little ads.

‘Looking back now, it was an awful lot of fun. People think that whisky is a very important thing, but really you’re selling pleasure and happiness. The drinks business is part of the entertainment business.’