As we prepare to celebrate the birthday of Scotland’s national poet, what should be on the menu, beyond haggis? Pipes, toasts, entertainment and laughter should all feature on 25 January, as our experts are quick to point out. 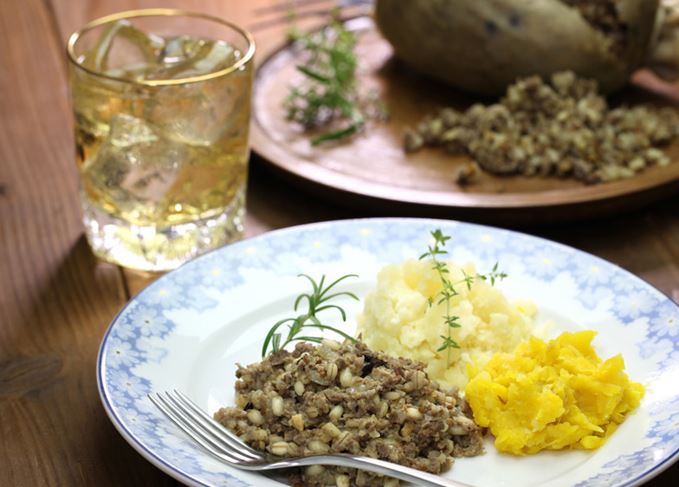 Haggis, neeps, tatties, whisky... what else do you need for a successful Burns Supper? Read on.

Most of us, I’m sure, could take a guess at the main elements necessary to the creation of a basic Burns Supper: haggis, neeps and tatties, bagpipes and – of course – whisky.

There is a traditional running order to proceedings, although it’s really up to you just how strictly you want to adhere to it. And evenings involving lots of whisky have a tendency to plot their own course anyway.

But, if you do want to put all of this together in a manner that respects tradition and gives your guests a night to remember… well, that takes a bit more thought.

Luckily, we at Scotchwhisky.com have a few friends who, between them, have presided over more Burns Suppers than most of us have had, er, hot dinners. What’s more, they’re not shy in sharing their advice. Let’s get to work.

‘My top tips for a classic Burns Supper are fairly simple: invite as many good friends as possible who appreciate the genius of Robert Burns, great food and generous amounts of fabulous whisky served with every course,’ says Richard Paterson, master blender, at Whyte & Mackay.

‘Be as inclusive as possible,’ adds David Stewart MBE, Balvenie malt master. ‘Like whisky, Burns’ work should bring people together.’

That last point is echoed by Georgie Bell, brand ambassador for Mortlach. ‘For many, whisky is community, friends old and new enjoying a dram or a cocktail together,’ she says. ‘If you’re by yourself, have a search online for an organised dinner, or head down to your nearest Scotch bar, where you’re sure to make friends on this legendary evening.’

The star of the evening is a savoury pudding constructed using a sheep’s stomach; various other bits of the animal you possibly don’t want to think about in minced or diced form; onion; oatmeal; suet; and seasoning.

Non-meat-eaters, however, needn’t despair: vegetarian haggis is now widely available and remarkably tasty, even to an unreconstructed carnivore like me.

Ask Dr Bill Lumsden, head of whisky creation at Glenmorangie, what are his top tips for a great Burns Supper and he has no hesitation: ‘A really good haggis. Sounds obvious, but there are some really bad ones out there. My favourite is from Cockburns of Dingwall – flavoursome and spicy.’ It’s an endorsement supported by Paterson too.

AND, WITH THE HAGGIS…

Copious amounts of neeps and tatties (mashed swede and potato), for sure, but much else besides. A good whisky with which to soak the haggis, toast the haggis and drink with the haggis is clearly compulsory.

Lumsden recommends ‘something that will truly complement the flavour; eg Glenmorangie Lasanta, Highland Park 12-Year-Old, Mortlach 16-Year-Old…ok, ok, so they are some of my favourite whiskies!’

And then there is the Address to a Haggis – for many, the centrepiece and highlight of any Burns Supper. Here an appointed speaker recites the famous Burns poem, knife at the ready – but this should be no soulless poetic recitation, rather an animated, dramatic performance that is as much acted as spoken.

‘Again, it sounds obvious, but I have been to Burns Suppers where the Address to a Haggis was read from a book – at least choose someone who actually knows the poem!’ counsels Lumsden.

This could be the moment for a little audience participation too… ‘I always have the audience read along with the Address to a Haggis with an on-screen translation, “karaoke-style”, then pick a volunteer/victim out of the audience and make them perform the final verse and cut the haggis,’ says Ewan Morgan, national director of Diageo Masters of Whisky.

‘Also printing out the Address on cards with each line translated underneath helps (screen or not); otherwise nobody has a bloody clue what’s going on.’

Rich food. Lots of whisky. A menu (Bill o’Fare) that is, on paper, dull: Cock-a-Leekie Soup; Haggis (plus neeps and tatties); Cranachan. The result, warns whisky writing legend Charlie MacLean, will be drowsiness, intoxication and an abbreviated attention span (not to mention sentimentality), severely testing the mettle of the evening’s chosen entertainments.

‘The music should be loud,’ MacLean advises as a consequence. ‘This is why bagpipes were invented. The songs should be lewd – there are many in the Bard’s extensive canon which fit the bill (see his collection Merry Muses of Caledonia). The poems, also necessarily chosen from Burns’ work, should be dramatic – Tam o’Shanter is ideal, but it has to be enacted, not read.’

Many of the remaining elements of the evening are a mingling of music, toasts, other entertainments and, naturally, some more readings from the great man of the hour. Again, check out the running order if you need reminding.

‘The Toast to the Lassies is key for me,’ says Lumsden. ‘This is has the capacity to make or break the supper, depending on how good the (male) speaker doing this is. I have done this a few times and it is high-pressure stuff – whisky tastings are easy in comparison!’ Note that females present get the last word shortly afterwards in The Reply.

For more on the subject of Scottish toasts, read our essential guide on the matter.

Auld Lang Syne. Sung – by those who have stayed the course – uproariously, sentimentally, joyously with red and glistening cheeks. Then a loud toast of Slainte Mhath! by all those present.

Then more whisky. Responsibly, of course…

DID YOU KNOW?
• The first Burns Supper was reputedly held by the poet’s friends on 21 July 1801, the fifth anniversary of his death, at Burns Cottage in Alloway, South Ayrshire
• A club of Burns’ admirers held their first Burns Supper on 29 January 1802 in the mistaken belief that this was his birthday; a year later, they discovered that he had been born on 25 January, and the date was switched
• Burns Suppers are particularly popular in Dunedin, New Zealand. Burns’ nephew, Thomas Burns, was a Presbyterian minister who led the founding of Otago, landing at Dunedin in 1848
• The Selkirk Grace, traditionally spoken at the beginning of the meal, is often attributed to Burns, but a version of it was known about a century earlier
• Are ‘neeps’ turnips or swedes? The vegetable in question is popularly known as rutabaga or Swedish turnip in North America; in England (and many other places) it is known as swede, but many in Scotland still know it as a turnip (or neep, or tumshie, or baigie…). All clear?