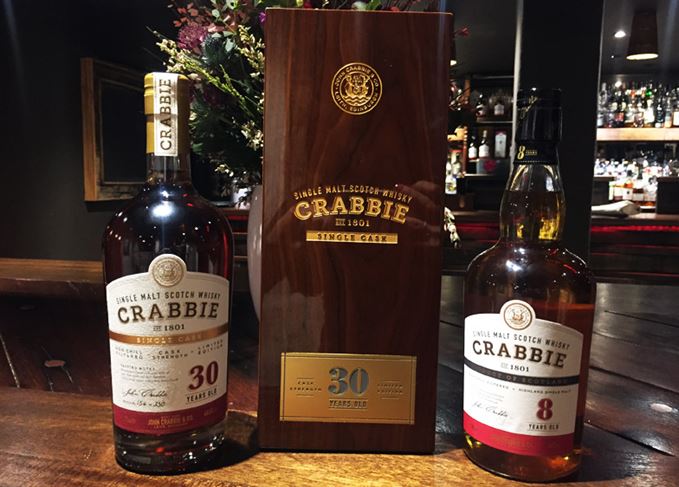 Historic return: Crabbie’s is making a comeback in the form of 30- and eight-year-old single malts

The whiskies – an eight-year-old Highland malt and a 30-year-old single cask Speyside malt – precede the opening of the John Crabbie & Co. distillery on Leith’s Granton Harbour this summer.

It will be the first new whisky distillery to open in Edinburgh for more than 100 years, and will bring the Crabbie’s whisky brand back home to the city in which it was created.

While brand owner Halewood Wines & Spirits is yet to reveal the style of whisky to be produced at the Leith distillery, its two new whiskies – sourced from other existing distilleries – are said to demonstrate the ‘high quality and excellence’ drinkers can come to expect from John Crabbie & Co.

The new Crabbie eight-year-old expression is a Highland single malt bottled at 46% abv, created in homage to John Crabbie’s flagship eight-year-old blend of the 19th century.

The expression, which embodies floral notes and flavours of honey, summer fruits and spice, is limited to only 12,000 bottles, which will be available in the UK, China and some European markets for about £30 a bottle.

David Brown, managing director of John Crabbie & Co, said the liquid is the result of a mistake made at the unnamed distillery.

‘A distillery went rogue in the 1980s and made this whisky, but it’s not in the house style,’ he said.

‘They made it for a couple of years until someone noticed and stopped it immediately. They viewed it as a failure, so stuck the casks at the back of the warehouse and left them there. However, this is a sublime whisky, it’s amazing.’

The 30-year-old is limited to 330 bottles at £500 each, and will be available only in the UK. However, a second single cask 30-year-old – also a refill oloroso Sherry butt from the same batch – will be released in China.

The two whiskies will kickstart a series of limited edition releases under the Crabbie brand, with the next expressions due for launch before the end of the year.

The releases follow the soft launch of the Crabbie whisky brand in 2017 with the rollout of a 28-year-old cask strength, single cask single malt from an undisclosed distillery, which was limited to just 221 bottles.

Brown added: ‘We’re not in a rush to do this; this is not a volume exercise. I’d like consumers to think that we’ve gone to the trouble of scouring Scotland to find the best whisky to save them the bother. We’ve got the expertise and the contacts to be able to pinpoint whiskies that have fallen into the ether.’

The John Crabbie & Co distillery is set to open at Forth Industrial Estate on Granton Harbour in Leith this summer, producing up to 165,000 litres of spirit each year.

The company can trace its origins back to 1801, when John’s father, Miller Crabbie, opened a grocer’s shop in Edinburgh.

The business, mainly concerned with the blending and bottling of cordials and whiskies that were shipped around the world, also acquired the Haddington distillery at Westfield, and was a founding partner of the North British grain distillery which still operates in the city today.