Macallan has unveiled its ‘ambitious’ new £140m distillery and visitor experience in Speyside, which will open to the public next month. 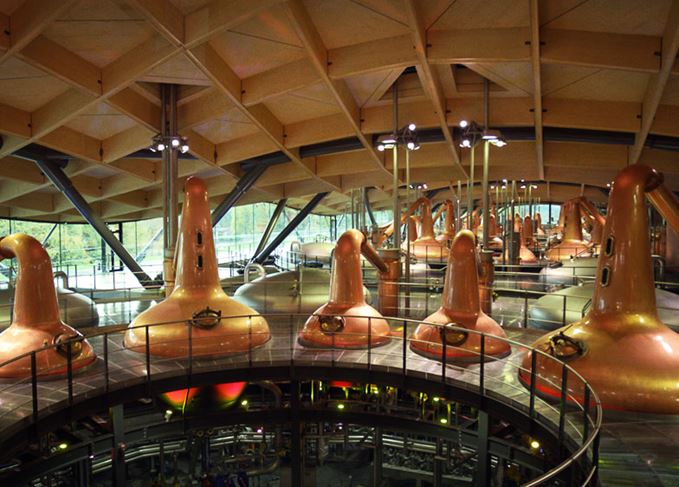 The iconic subterranean distillery, situated on the Easter Elchies estate in Craigellachie, is already producing spirit for the Macallan single malt brand after the original adjacent site was decommissioned in October 2017.

With 36 copper pot stills – 15 more than the previous site – the new distillery will enable production of the Macallan single malt to increase by up to one-third if required.

Ken Grier, creative director for the Macallan, said: ‘As The Macallan has grown globally it has been very important that we make sure we can sustain demand for this wonderful amber liquid.’

Macallan’s stills are arranged in three circular ‘pods’, sharing space with 21 stainless steel fermenters, while the site also features a single 17-tonne mash tun, said to be the largest in Scotland.

Despite the increase in size, Grier said the character of Macallan’s whisky will remain the same.

‘This is the beginning of a really exciting new chapter in the evolution of this wonderful brand that is The Macallan.’

Compression and release: Macallan’s entrance is designed to draw visitors in before they’re shocked by the interior’s size

Designed by Rogers Stirk Harbour + Partners, the internationally-recognised architect behind London’s Millennium Dome, the distillery and visitor centre has been inspired by traditional Scottish brochs, or roundhouses.

Its undulating grass and wildflower-topped roof – one of the most complex timber roof structures in the world – has been designed to blend into the surrounding Speyside landscape that’s classified as an ‘Area of Great Landscape Value’.

The visitor centre, which officially opens to the public on 2 June, has been designed by museum developer Atelier Brückner, and features a series of interactive displays representing each of Macallan’s ‘six pillars’ that underpin the core values of the brand.

Among them are a walk-through oak ‘forest’ and cask-firing demonstration, while the traditional distillery spirit safe is forgone in favour of a Lalique sculpture representing the third pillar, the ‘finest cut’.

The visitor centre will also house the Macallan archive – a collection of 398 bottles, 19 decanters and four flasks that will be on public display for the first time.

The new distillery represents a significant investment in Macallan by brand owner Edrington, which is putting a total of £500m towards building the distillery and additional warehousing, and sourcing quality wood over the next 12 years.

Ian Curle, CEO of Edrington, said: ‘The unsurpassed quality of the Macallan is in high demand and we face the future confidently with this new distillery. It’s an authentic, abiding, ambitious investment that will match consumer expectations for generations to come.

‘When the doors open in June, we expect this new Macallan enterprise to deliver significant benefits for the tourism industry, Scotch whisky exports, and the economy.’

Ground broke on the new distillery in December 2014, and has involved a 400-strong workforce specialising in 20 different trades.

The original distillery, which was first licensed to distil in 1824 and has been extended many times in the last 200 years, will be mothballed for the foreseeable future.