As Macallan’s £100m-plus new distillery nears completion, it’s an emotional time for the man who came up with the idea, creative director Ken Grier. He spoke to Richard Woodard about the challenges facing Scotch whisky’s biggest construction project – and single malt’s most lucrative brand. 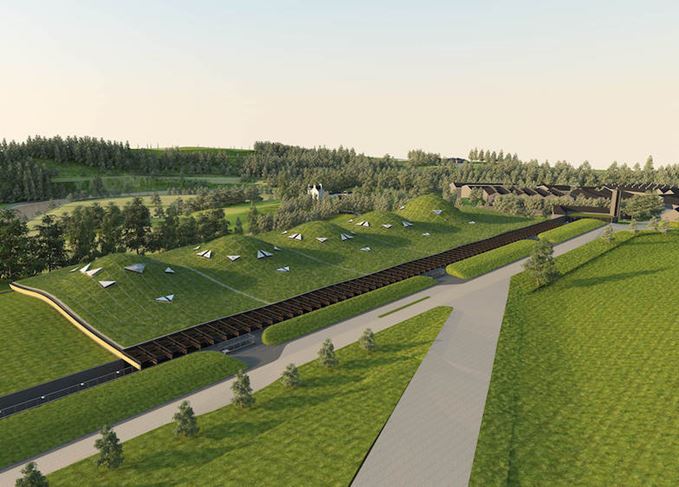 Like no other: Macallan’s £100m-plus budget dwarfs other distillery builds

The early 2010s were a boom time for Scotch whisky in general, and for Macallan in particular. Exports were on an apparently never-ending upward curve, rare bottlings were changing hands for breathtaking sums of money, and China’s appetite for luxury seemed to be insatiable.

Scotch was now sailing in uncharted waters, earning the kind of status previously reserved for high-end Cognacs, and Macallan was leading the fleet. This was single malt reimagined as Bordeaux first growth or Paris fashion maison.

The one problem? Keeping up with demand. As Macallan owner Edrington pored over long-term forecasts, one thing was clear: the existing distillery at Easter Elchies, near Craigellachie, could no longer live up to the company’s long-term ambitions for the brand.

‘We talked about do we expand the existing facility, do we build somewhere fresh,’ recalls Macallan creative director Ken Grier. ‘Then I took a copy of Great Wineries of the World down from the bookshelf. I looked at a picture of Ysios [the futuristic Santiago Calatrava-designed winery in Rioja] and said: “We should really do this.”’

At a time when Macallan was redefining luxury whisky – or perhaps defining it for the first time – the idea was not just to increase production, but to give Macallan a home worthy of its newly-earned place in the world. ‘We want to make sure that we have those credentials of a Mouton-Rothschild or a Pétrus,’ explains Grier.

Everything about the new distillery was on the grand scale: the competition for architects (won by Rogers Stirk Harbour + Partners), the £100m budget, the eye-catching subterranean design – likened by some to the home of children’s television favourites the Teletubbies, but apparently based loosely on a Scottish broch or ancient roundhouse.

Man with a plan: The new Macallan distillery was Ken Grier’s idea

Now, nearly three years after ground was broken on the project, the planned opening date of June 2017 has come and gone, while that £100m budget has mushroomed to a reported £120m.

‘Along the way you get the usual challenges about the [landscape], how to deal with it and you move on,’ says Grier. ‘We would love to get it up and running at the moment.

‘We’re now in a situation where the distillery will be finished pretty much early to mid-September, and we’ll be commissioning it and running spirit in the latter part of the year, probably in November. We’re looking to be open to the public in the early summer of next year.’

And, on the cost: ‘Let’s just say the budget that we’ve set isn’t exactly where we’re going to finish.’

Some reports have suggested that the new distillery will mean an immediate 15% production increase, but with the potential to hit 15m litres of pure alcohol (lpa) a year, versus the old distillery’s 9m lpa. There is also tantalising talk of the world’s largest mash tun.

A tight-lipped Grier is keener to discuss quality and consistency – vitally important issues when you consider that the current Macallan distillery will be mothballed once the new one is fully operational.

The efforts made, alongside coppersmith Forsyths, to ensure that the new equipment produces a spirit identical to the old Macallan have been ‘hugely painstaking’, says Grier. ‘People need have no concern. We have been all over this in every way. If you want to make the perfect whisky, you have to have the perfect distillery.’

While many new distilleries are all about versatility and experimental distillation regimes, that’s not the case here. ‘At the moment, we don’t plan to do that,’ says Grier. ‘This is not the purpose of this distillery. There will be no experimental runs for the time being at least.’

But there’s much more to the new distillery than making whisky. For the visitor centre, Edrington has commissioned museum developer Atelier Brückner (also working on the Grand Egyptian Museum in Giza).

According to reports, plans include a large-scale art gallery and six different rooms representing each of the ‘six pillars’ that underpin the character of Macallan’s whisky.

‘The idea is to build a distillery that really gives people a “wow”,’ says Grier. ‘We really want people to come in and to share some of our secrets.’

But things have changed since the bullish days of the early 2010s. Scotch whisky exports have suffered declines (although single malt has continued to thrive); the luxury markets in China and Russia have imploded, albeit for different reasons; Macallan itself has seen sales suffer in the key Asian market of Taiwan as rival brands have eroded its market share.

‘The lesson we learned – which was why we launched Macallan Double Cask in Taiwan – is that that market has much more choice for consumers, thanks to the great work that some of our competitors have done,’ says Grier.

‘We had to make sure that our consumers had more choice, so we now have a focus on the “trinity” of Sherry Oak, Fine Oak, Double Cask – and it’s made a huge difference.’

Elsewhere, travel retail has been ‘tricky’ thanks to the travails of the luxury market in Russia and China, but – despite short-term challenges – Grier remains convinced of the continuing potential of the latter. ‘I’m confident that China will be a massive single malt market, but it may not be in my time,’ he says.

Out with the old: Macallan’s current stills will fall silent once the new plant is running

Meanwhile, it will be more than a decade before Macallan’s new distillery produces its first fully mature whisky, as Grier acknowledges. ‘We will be stock-constrained for the foreseeable future,’ he says.

That means the continued tweaking of ranges and priorities, including a renewed focus on age-stated expressions in ‘mature’ markets such as London – ‘the great European cities are terribly important for luxury brands’, says Grier.

The colour-coded and sometimes criticised 1824 range will also evolve, with Macallan Ruby set to be discontinued imminently (although Grier is reluctant to confirm this) and other changes likely, partly because of the huge early success of Macallan Double Cask.

‘That may lead us to make some decisions,’ says Grier. ‘Some products may leave the range; other products might be added. We’ve been involved in quite a big exercise, going back and sampling the last 12 years of whiskies, these older stocks. So there will be changes.’

And what about the backlash (in some quarters) against the NAS 1824 range? ‘People forget. Whisky is all about innovation, trying things, whether it’s quarter cask products, products without an age statement, craft whiskies or finishing. And that’s fantastic, because with innovation you get younger consumers coming in.’

But, in the short term, Grier’s sights are firmly fixed on getting Macallan’s new distillery up and running without further delay. ‘I was on-site yesterday [13 July] and we’re on track for that new timescale,’ he says.

‘It’s very emotional for me, being the author of the whole thing, to see it come alive. And it’s beautiful – utterly breathtaking.’

Watch how Macallan's new distillery has been brought to life, in an exclusive fly-over of the site near Craigellachie.