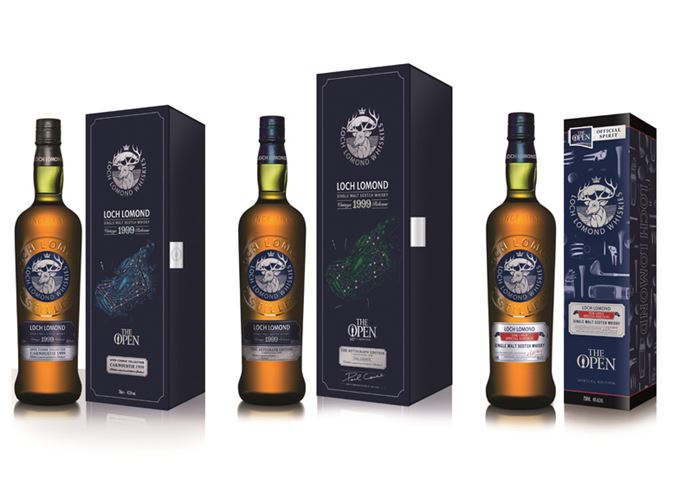 The three limited edition whiskies include two 1999 vintages, bottled to honour Lawrie’s Open victory that same year, as well as a no-age-statement expression.

The 1999 Vintage Autograph Edition has been created by Loch Lomond master blender Michael Henry in collaboration with Lawrie, with both bottle and outer packaging featuring the golfer’s signature.

The expression has been matured in refill American oak hogsheads and ex-Bourbon barrels, and bottled at a cask strength of 50.8% abv.

For the second expression, Henry worked alongside Scottish golfer Colin Montgomerie to select refill American oak casks from 1999, bottling the whisky at 47.2% abv.

Both whiskies are said to have ‘aromas of honey, tropical fruits and hints of maple syrup’.

The Open Special Edition meanwhile is a no-age-statement single malt bottled at 46% abv, which has been created from spirit distilled from wine yeast fermentations that’s been matured in first-fill ex-Bourbon barrels and recharred American oak hogsheads.

The whisky is described as having ‘vibrant, fruity notes of peach and pear’ along with ‘a gentle hint of peat and smoke’ on the palate.

All three whiskies will be available globally from June with the Carnoustie and Autograph editions priced at £150, and the Open Special Edition at £36.

For the next five years Loch Lomond will be the official spirit of the Open, having taken over the sponsorship from Glenmorangie. The championship returns to Carnoustie Golf Links in July.