Loch Lomond has released two new single malts in association with golfers Colin Montgomerie and Darren Clarke to mark the second year of the distiller’s partnership with The Open Championship. 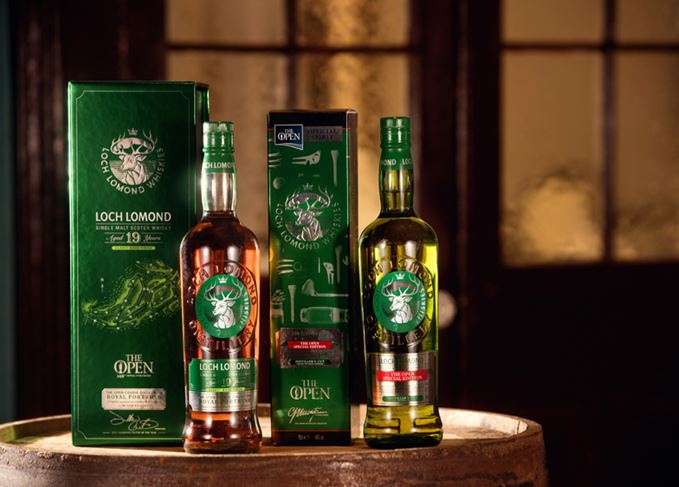 Whisky and golf: Loch Lomond’s new malts celebrate its second year as ‘The Spirit of the Open’

The Highland distillery, which agreed to a five-year partnership as the official ‘Spirit of the Open’ in February 2018, said the limited edition expressions are designed to ‘showcase whisky and golf; two of Scotland’s most iconic exports’.

The expressions have been released to coincide with the 148th Open Championship held at Royal Portrush Golf Club in Portrush, Northern Ireland on 14-21 July.

The Open Special Edition 2019 has been created by Loch Lomond master blender Michael Henry in collaboration with Montgomerie, who added his signature to the green ‘golf-inspired’ box that encloses the bottle.

The no-age-statement single malt was aged in first-fill and refill ex-Bourbon barrels, and refill American oak hogsheads, before being bottled at 46% abv.

The whisky has been made from a mixture of four different spirit styles to ‘deliver the distillery’s distinct fruity character underpinned with a gentle hint of peat and smoke’.

It is also said to have ‘a vibrant palate of peach and pear, enhanced using specially selected spirit distilled from wine yeast fermentations’.

The second expression, The Open Course Collection Royal Portrush, has been made to honour the return of the Open to the golf club for the first time in almost 70 years.

To create the 19-year-old single malt Henry worked alongside Portrush-based Clarke to choose casks from the distillery’s on-site cooperage.

The expression was first aged in American oak casks, before being finished in ex-claret casks as an ‘homage’ to the Open Championship trophy.

The trophy is commonly called the ‘Claret Jug’ as its shape is similar to the containers used in the 19th century to serve the distinctive French red wine.

The whisky is bottled at 50.3% abv and presented in a green box featuring Clarke’s signature and a map of the Royal Portrush Golf Club course.

The Open Course Collection Royal Portrush is described as having a ‘stunning rose colour’ along with a palate ‘rich in honey sweetness with tropical fruits coming to the fore’.

Commenting on the releases, Henry said: ‘Each expression harnesses the spirit of our Loch Lomond distillery, conveying a fruity character punctuated with deep, complex flavours and delivering a rich mouthfeel.

‘Personally, these releases mean a great deal to me; hailing originally from Northern Ireland, it is highly rewarding to be showcasing Scotch whisky to my home country and to have the opportunity to celebrate Royal Portrush.’

Both expressions will be available in 70cl bottles worldwide from April 2019, with The Open Special Edition priced at £37 and The Open Course Collection Royal Portrush at £150.

In addition to the new single malts, Loch Lomond announced it will also release a ‘premium’ expression in summer 2019 to mark Montgomerie’s achievements in his 30-year golfing career.

Montgomerie has won 50 golf tournaments and held the European No. 1 spot for seven years.