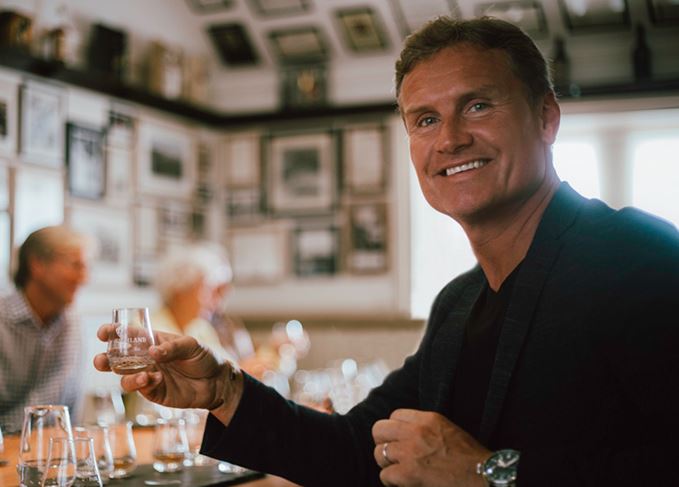 Formula for success: Coulthard’s Saltire Editions were based on his ‘extensive tastings’ on Orkney

Highland Park Saltire Editions 1 and 2 are both 13-year-old single malts matured in ex-Sherry casks, although Saltire Edition 1 is a single cask whisky.

An unspecified percentage of the profits of both whiskies will be donated to charities based in Coulthard’s local community of Dumfries and Galloway.

Coulthard said: ‘My community helped give me so many great opportunities – I’m proud to be able to support them and share some of my success by providing them with some of the proceeds from the sales of these new whiskies.

‘I’ve enjoyed participating in the whisky creation process and I’m proud that Highland Park is helping me bring the project to life.’

Based on Coulthard’s ‘extensive tastings’ during a trip to Orkney, the Saltire Editions are named for the national flag of Scotland, which featured on Coulthard’s helmet throughout his F1 career and is represented on the whiskies’ packaging.

Jason Craig, global brand director for Highland Park, said: ‘As a proud Scotsman and winner of 13 Grand Prix races, David demonstrates all the characteristics of our view of a modern day Viking Soul.

‘His desire to support his local community is very much in keeping with our ethos at Highland Park.’

The single cask Saltire Edition 1 is bottled at 43% abv and is said to contain ‘vanilla, lemon and ginger’ notes with a ‘sweet citrus and spicy’ finish.

Only 734 bottles have been produced, which are now available from the Highland Park distillery website priced at £139.

Limited run: Just 734 bottles of the single cask Saltire Edition 1 have been produced

The Saltire Edition 2 is priced at £54.99 and will be available to pre-order from the distillery website, with bottles due to be delivered later this spring.

After winning 13 Grand Prix championships over the course of his career, Coulthard retired from F1 in 2008 and is now a commentator and pundit.