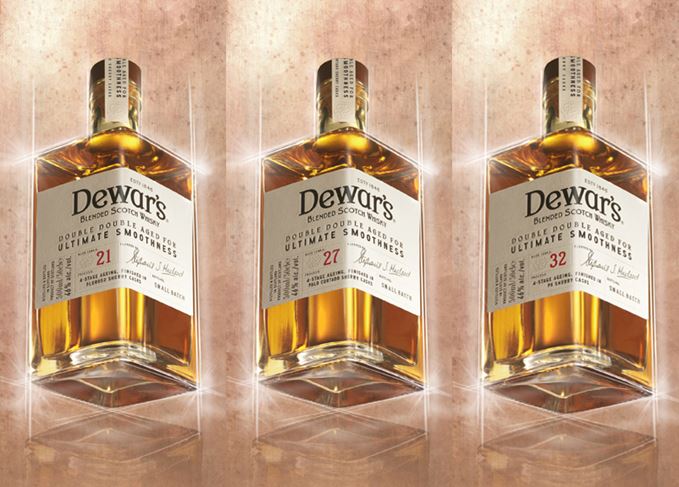 The range features three expressions – a 21-, 27- and 32-year-old – which have been launched in global travel retail.

The four-step maturation process involves marrying single malts together in an exhausted Bourbon cask for up to six months.

A selection of grain whiskies is also married together in separate exhausted casks, before all the whiskies are blended together and rested in more exhausted ex-Bourbon casks.

The blend is then finished in three different kinds of first-fill ex-Sherry cask for up to one year.

Dewar’s Double Double 21 Year Old has been finished in ex-oloroso Sherry casks, and has notes of honey, golden syrup, toffee apples and raisins.

The 27 Year Old has been finished in ex-Palo Cortado casks, and has floral notes, along with green fruits and malt.

Finally, the 32 Year Old has been finished in ex-Pedro Ximénez casks and has, rich treacly notes of jam and baking spices, with a touch of smoke.

Four-step process: Dewar’s Double Double is made using a process said to have been pioneered in the early 20th century

All three expressions have been bottled at 46% abv, and are available in Singapore Changi airport for US$90, US$160 and US$250 respectively per 50cl bottle.

Dewar’s Double Double is said to build on a blending process the brand claims was pioneered by Dewars’ first master blender, AJ Cameron, in 1901.