Isle of Mull distillery Tobermory has launched its new flagship 12-year-old whisky, and its first gin, as the currently-closed distillery reveals plans to resume production in July. 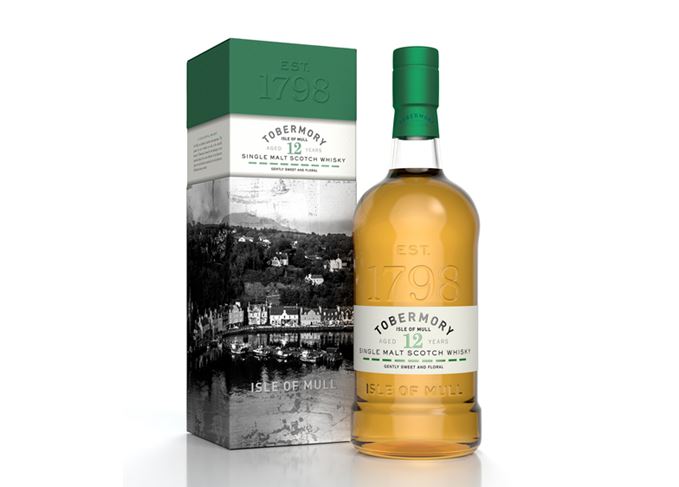 New beginning: The 12-year-old is the only unpeated malt in the distillery’s core range

The whisky, which will replace the 10-year-old in the brand’s core range, has been matured in first-fill ex-Bourbon barrels before spending up to nine months in virgin American oak casks.

Derek Scott, brand director at Tobermory owner Distell, said: ‘We came to the conclusion that while the 10-year-old Tobermory was a great whisky, it really hadn’t quite reached its full potential.

‘It’s quite a big change to an old, established brand like Tobermory, but what a difference a couple of years makes.’

The whisky is said to contain ‘rich fruit, orange and citrus notes’ on the nose and ‘creamy caramel, rich vanilla and spicy hints of cinnamon and clove’ on the palate.

The whisky will be issued to UK and Europe retailers from today (28 March), priced at £46, while international markets will be supplied ‘in due course’.

The distillery, which has been closed for two years for maintenance, will resume whisky production after the installation of a new pot still, christened ‘Big Mary’, has been completed.

A new still room to create ‘a collection of spirits’ has also been added to the distillery, housing a 60-litre development still named ‘Wee Mary’ which has already produced Tobermory’s first gin.

Scott said: ‘There’s no doubt about gin’s popularity in the UK and around the world, and we are jumping on the bandwagon.’

Quite contrary: The first gin from ‘Wee Mary’ contains a small percentage of malt spirit

Tobermory Hebridean Gin has been produced in a small batch of just 213 bottles, containing botanicals from the Isle of Mull in addition to a small percentage of Tobermory’s new make malt spirit, which is said to produce a ‘rounded creaminess’ on the palate.

Tobermory 12 Year Old is currently the only unpeated expression in the distillery’s core range; Distell did not comment on plans to expand its offering in the near future.

The distillery’s peated variant, Ledaig, is currently available as 10- and 18-year-old bottlings.

Another five years of development have been planned following the distillery’s reopening, including an expansion of its visitor centre and further additions to its distilling capabilities.