Stephen Woodcock oversees operations at Deanston, Bunnahabhain and Tobermory distilleries in his role with parent company Distell. Ahead of Tobermory’s re-opening this summer, he reveals what went on behind the scenes during the Mull distillery’s two-year closure and the drive behind creating its first gin. 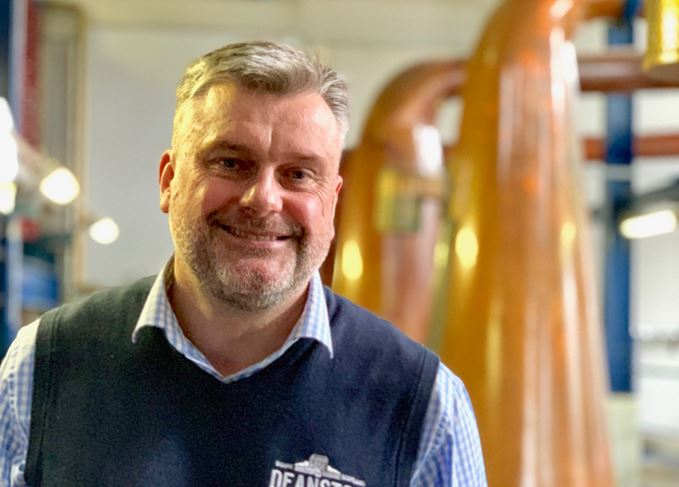 Neat freak: Woodcock loves the whisky he makes – but loathes pairing it with food

‘I cannot understand the trend of pairing whisky with food, or whisky and chocolate, or whisky with anything else. I know it sounds cliché, but I like to enjoy a nice whisky on its own, as intended. Why would you pair something that’s so nice when enjoyed on its own? A splash of water or a rock of ice is fine, but I want my full attention on the dram. I have a very one-dimensional palate – it’s one reason why I’ll never be a blender.

‘I was born into the drinks industry, as my father owned a pub and my mother worked for Allied Distillers for 40 years. I’m a chemist by trade. I worked in chemistry for a couple of years, but the lure of whisky was never far away – I landed a role with Diageo at Port Dundas distillery in Glasgow and worked there until it closed. I moved north and my role took me to a number of distilleries and I’ve been working in whisky ever since. Distilling is just a chemical process like any other.

‘Tobermory is extremely important to the community on the island of Mull. When we closed for two years we wanted to retain the staff as we’re not tripping over distillers in Mull by virtue of being the only distillery on the island. Each distillery is a big part of the community it’s in, so we wanted to make a commitment to the locals that we’d be staying open, especially in light of the distillery’s chequered past. Over the years, Tobermory has been closed almost as long as it’s been open.

Community spirit: Tobermory distillery is a key feature on the small Scottish island of Mull

‘In those two years we’ve done a lot of work to the infrastructure such as replacing the roofs, all four washbacks and two stills. We’ve also been working on a gin plant with a smaller still for experiements.

‘The new stills will work slightly differently, with replaceable joints as opposed to having everything welded in place. When we come to change any of the parts, it will operate like a Formula One pit crew: rather than cutting through the still and welding it back together again like the old days, we’re using air-driven torque wrenches. Old kit out, new kit in and suddenly we’re back up and distilling. It’s quicker, but it’s also safer. Unfortunately, I’m yet to convince Andrew [Brown, distillery manager at Bunnahabhain] to go for this kind of still. He’s so traditional – he said: “I will not see a flange [a raised rim that runs along a joint] on a still as long as I draw breath”.

‘Those new stills won’t change the way we distil our whisky. If you’ve got a good thing going, you don’t change it. However, what we have done is rebranded the Tobermory 10 to a Tobermory 12, relaunching it with new, vibrant packaging. The 10-year-old was a fine dram and to be honest, we were underselling it. But rather than being cynical and just increasing the price of the bottle, we’ve premiumised it by leaving the whisky for a couple of extra years in the cask. Those two years have added a nice round maturity to the whisky, coupled with a sweetness the 10-year-old was lacking. I believe the age, the quality of the spirit and the price point now all tie together beautifully.

‘Funnily enough, we kept the visitor’s centre open and we’ve seen record numbers of footfall since the distillery was shut. Even being silent hasn’t put people off visiting us.

‘We recognised Tobermory was not doing much to tap into the uniqueness of Mull. We were the only distillery on the island and we wanted to put something through the stills that would reflect the island’s unspoiled landscape, so we created Mull’s only gin. We could have taken the easy route – you may not be aware there’s an old gin rectification house at Deanston, so Distell could have produced gin there – but we decided to make something from scratch and distil our spirit in a beautiful part of the world.

‘That was the rationale behind building our small experimental stillhouse, which is home to our little “wee Mary” gin still. The name comes from Tobermory, which is Gaelic for “Mary’s well”.

‘As an industry, whisky is often viewed as taking an awful lot from some of our natural resources without putting too much back in, but Deanston sticks out for its green credentials. Deanston was one of the first distilleries to make organic whisky, bringing in barley grown without pesticides, which lessens its environmental impact. Seeing more organic whiskies coming through would be a very positive thing for the industry. At Bunnahabhain, we’re looking at installing a biomass boiler for steam generation and we’ve stopped sending our waste co-products like draff to be turned into cattle feed. Instead, all our co-products now go to third parties who generate gas with it, so we’re feeding energy back into the grid.

‘My family home is in Speyside. From Monday to Friday, my time is split between three distilleries, so when I go home those two days are very precious to me. I love my music – I have always been a very keen guitar player. I’m not very good at it and I know that, because I can see the faces of the people in the room when I’m playing it.

‘I was also a keen rugby player, but my nickname as a full-back was “Hole In My Bucket” because I never seemed to catch the ball. Now I’m a man of a certain age, I make my voice heard from the touchline instead. However, regardless of what I’m doing, I can always manage to squeeze a dram in somewhere.’