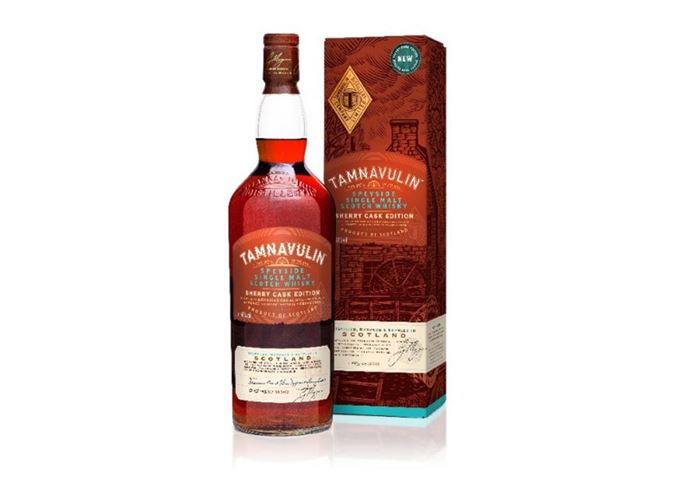 Tamnavulin Sherry Cask Edition is the second no-age-statement expression released by the Moray-based distillery, whose whisky is predominantly used in blends by its owner Whyte & Mackay.

The expression was matured in American oak barrels before being finished in three different oloroso Sherry casks sourced from individual cooperages in Spain.

Bottled at 40% abv, the whisky is said to have ‘enticing aromas of vanilla, caramel, banana and milk chocolate’ on the nose and a palate with ‘warm, sweet flavours of maple syrup, raisin and orange’.

The Sherry Cask Edition is now available in one-litre bottles at Tesco stores in the UK for £45.

The expression will be sold in a 70cl version at around £32 a bottle in various UK grocers in the second half of 2019.

Whyte & Mackay said the expression was created to ‘give shoppers the opportunity to delve into the world of Sherry-finished single malt without breaking the bank’.

Kirsteen Beeston, head of international malt brands at Whyte & Mackay, stated: ‘The opportunity for this new expression is two-fold; we know Tamnavulin recruits new drinkers into malts and Sherry finishes are quintessential in malt.

‘However, we also know that many whisky enthusiasts want affordable good quality malts.’

The Double Cask expression was released in 2016 to celebrate Tamnavulin’s 50th anniversary, and was the first single malt released by the distillery in 20 years.

The distillery was built in Tamnavoulin by Invergordon Distillers in 1966 to meet the high demand for whisky at the time, and sold to Whyte & Mackay in 1993.

Its new owner mothballed the distillery two years later and it lay silent until 2007, when production restarted.