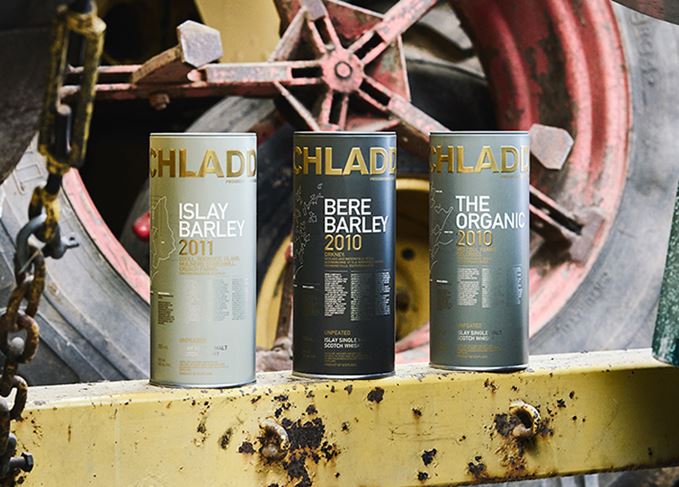 The trio of malts are said to represent the ‘what, where and how’ of Bruichladdich’s barley growing programme across Scotland.

Adam Hannett, head distiller for Bruichladdich, said: ‘We want to support people who grow for flavour, those champions of heritage and natural crops.

‘By partnering with [farmers], we can find new and long-forgotten flavours, reconnecting our whisky with its vital raw ingredient.’

Bruichladdich The Organic 2010 is an eight-year-old malt matured in American oak casks and bottled at 50% abv.

Priced at £75 per 70cl bottle, the whisky is said to contain notes of ‘vanilla, caramel and pastry’ notes on the nose with ‘sweet pear drops, chocolate and marzipan’ on the palate.

The Organic has been made from barley grown at Mid Coul Farms in Inverness without the use of pesticides, herbicides and artificial fertilisers.

Bere barley has a ‘desperately low yield’ – up to 50% less than other varieties, but is said to impart a ‘unique’ flavour profile to whisky.

Priced at £75 per 70cl bottle, Bere Barley 2010 is an eight-year-old single malt matured in American oak casks and bottled at 50% abv.

The whisky is said to be ‘dominated by cereal, porridge and malty notes’ on the nose with ‘peaches, syrup, cinder toffee and apricot jam’ on the palate.

Island grain: The six-year-old single malt is made from 100% Islay-grown barley

A six-year-old single malt priced at £55 per 70cl bottle, the whisky is said to be full of ‘apple, pear and gooseberry’ on the nose with ‘lemon, kiwi and caramel wafter’ on the palate.

Islay Barley 2011 has been distilled entirely from barley grown on Islay.

All three whiskies are available on the Bruichladdich website and in specialist stores across the UK, appearing in international markets later in the year.

The distillery has also confirmed plans to build its own maltings by 2023, which will process all Islay-grown barley for its Organic, Bere and Islay expressions.