Two experimental single pot still Irish whiskeys have been added to Irish Distillers’ Method & Madness range, both of which have been finished in non-oak casks. 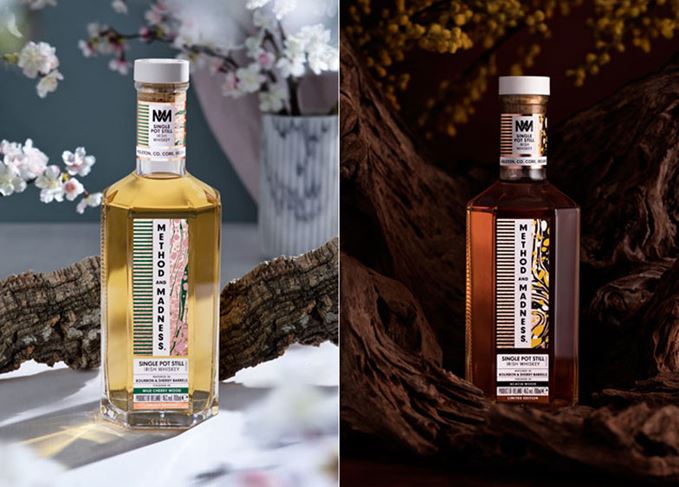 The introduction of the Single Pot Still Wild Cherry Wood Finish and Acacia Wood Finish is the result of experiments conducted by Midleton distillery and its micro distillery in County Cork.

The Cherry Wood Finish is said to be the first Irish whisky to be matured in casks made from the cherry tree.

The tree’s porous structure increases the interaction between the wood and whisky, resulting in flavours of ‘ginger, coconut and black tea’.

Midleton matured its single pot still whiskey for an unspecified period of time in ex-Bourbon and Sherry casks, before finishing it in the French cherry wood for between seven months and four years.

Kevin O’Gorman, master of maturation at Midleton distillery, said cherry wood had been the most challenging cask type the team had worked with since it began researching maturation in 2014.

He said: ‘The rare, porous wood is different to anything that we have handled before, so it has been a real achievement to create the perfect balance of flavour – the result is a world-first in Irish whiskey, with a nose of coconut fibre and ginger, a palate of fresh green herbs, black tea and unmistakable pot still spices and a long, fresh finish with prickly spice and hazelnut.’

Method & Madness’ second new release is another single pot still whiskey finished in casks made from French acacia wood for between one and four years.

Initially matured in ex-Bourbon and Sherry casks, the whiskey is said to have ‘rich nutty and chocolatey flavours’ imparted by the acacia.

Finbarr Curran,  member of the maturation research team at Midleton distillery, said: ‘The density of the acacia wood presented a challenge in contrast to the wild cherry wood as the maturation process was much slower and required a close eye and nose to achieve the perfect balance. But it was well worth the wait.’

Method & Madness Single Pot Still Irish Whiskey Finished in Wild Cherry Wood (46% abv) is available in the UK and Ireland as well as global travel retail for around €92 per 70cl.

Method & Madness Single Pot Still Irish Whiskey Finished in Acacia Wood (46% abv) is available exclusively through the Celtic Whiskey Shop in Ireland for around €92 per 70cl.

Irish Distillers launched its Method & Madness range in February 2017 to ‘push the boundaries of Irish whiskey and the Irish spirits category through innovative releases’.

In 2018 a Hungarian oak-finished single pot still was released as a limited addition to the range.