How do you prefer your Scotch whisky: neat, mixed or over ice? For decades, the latter ingredient has been the subject of rampant debate – particularly when it comes to single malts. Two leading, moustachioed whisky warriors engage in a duel of words... 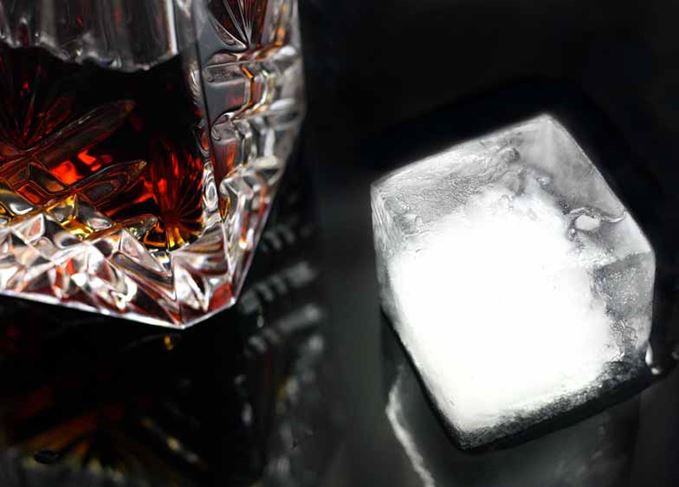 An icy debate: Opinions are divided over the addition of ice to single malts

The fiery, un-aged hooch that evolved into modern day Scotch whisky was blended with berries, honey, heather, herbs… anything to numb the pain. And the same goes for ice, according to Richard Paterson, who believes it may have helped certain rough whiskies slip down in the past but is no longer required for a well-aged blend, and least of all a good single malt.

While accepting that it’s a matter of personal taste, he makes an impassioned plea to ditch the ice bucket. For something so carefully put together, he argues, why would you do anything to blunt or diminish those complex flavours and aromas?

But there’s a big counter-argument to all this, namely that Scotch needs to ditch all that prescriptive crap of ‘dos and don’ts’ once and for all. It needs to get with it and embrace the modern world of drinks where anything goes, be it neat, tall, long over ice, or mixed with whatever you damn well please.

Fred Laing may not be in his first flush of youth, but he’s definitely younger than his hero, Sir Mick Jagger. And he clearly takes the same rock ‘n’ roll attitude to Scotch.

‘When it comes to ice and whisky, it’s like adding cream, sugar and milk to great coffee when you don’t really need it. Of course it’s down to personal taste but as far I’m concerned, when I take so many years to create a whisky – particularly a great single malt – adding ice really does numb it, and it takes away that quality that opens up in the mouth. You don’t need to chill it.

‘Let the warmth of your tongue do the talking not the bloody ice.

‘When I was in Singapore recently, this guy came up to me with a glass of whisky rammed with ice, and I said: “Gee, you seem to like whisky and ice.” He replied: “The barman told me this is how you should drink it.”

‘When I discovered it was a Dalmore Aurora, I cried: “That’s 45 years old! You’ve just absolutely chilled it, ruined it, and it’s taken 45 years to put together.” He seemed quite happy, so it does come down to ignorance and educating people to make full use of their mouths and nothing else.

‘Sometimes in the olden days when whiskies were a bit questionable ice could help numb that bite of alcohol, but today very few whiskies are bitter or sharp. Maybe Fred is not taking as much care as I am and maybe his whiskies do need it; but if a whisky’s great then you really don’t need ice to take away that sharpness or aggression.

‘The only time I might like it chilled is with an Islay whisky when I want to capture that sense of wind and rain in my face, as though I was out there facing the North Sea or mighty Atlantic. But it’s very seldom, and with ice you have to be careful.

‘I was in a bar in America and asked for a Dalmore, which the barman covered in ice. “What’re you doing?” I said. “Givin’ you ice like everyone else does,” he replied. I picked out an ice cube, smelt it and asked where it was from.

‘“Obviously our refrigerator, what’s the problem?” And I told him: “This ice actually smells of garlic, cheese and pasta. Apart from chilling it, it’s absolutely ruined my whisky.”

‘So it does come down to education to make sure that whoever’s serving you a malt or well-aged blend does it the correct way.

‘Finally, you’ll notice Fred’s moustache is not as neatly trimmed as mine. If you look closely you’ll see the end bits are stuck together. And I wouldn’t be surprised if they’ve been stuck together with ice.’

‘As a rule, I would never draw swords with my old chum Dickie, aka Richard Paterson. While I can be a malt whisky purist, I can also be thrawn enough to head down the ice road with it – even knowing how theatrically (as always) he would deal with that at one of his tastings. I tell you he's a real health and safety hazard.

‘Our oh-so-modestly named Remarkable Regional Malt (RRM) selection that ranges from Big Peat from Islay to Rock Oyster from the Islands, and the Epicurean from the Lowlands highlights the naturally-coloured and non-chill-filtered qualities of what we still contentiously call vatted malts.

‘And of course we love them to be consumed straight up, believing that we've already added enough water at their bottling strength of 46% abv.

‘They have all been promoted with their own branded copitas to be consumed this way, or with just the slightest drop of water. But apart from myself, it's a young team we have here at Douglas Laing and, unlike some I know, they take a modern and refreshingly open view of life. They like to experiment, try new things and live on the edge.

‘That takes us into the realm of the mixologists and long serves, most of which are iced or at least chilled. We can take Rock Oyster into a nicely spiced and smoky Bloody Mary or the Epicurean into a herbal and refreshing Horse's Neck – both with ice.

‘And we can be similarly “promiscuous drinkers” with these other brands. Clearly, being a year younger than Dickie gives me a far more open perspective on things.

‘Anyway, one last axe to grind with you my old mucker is: why do you insist on holding your copita by the stem? As well as being somewhat fay, in my view, it just seems totally at odds with your aversion to chilling your malt.

‘Surely you want warmth to release all those aromas, and yet for some reason you will not countenance “cupping” the glass in your hands.

‘But on this burning issue of ice, who should we believe? My wife tells me you can never trust a man with a moustache… where does that leave us?’

So there you have it – not so much a drawing of swords as a jousting of moustaches between two veterans of the trade.

Some may see Paterson as a Scotch whisky dinosaur – a King Canute trying to stem the tide of ice. But the truth is people do want to learn how to appreciate their whiskies and get the most from them.

Someone has to tell them – and someone better than that hapless bartender in America who tried to poison Paterson with some cheesy, garlic-encrusted ice cubes (oh, to have been a fly on the wall).

Such an experience would probably drive anyone to neat Scotch for life.