After all that time spent gently maturing in cask, whisky deserves more consideration and respect than being swiftly shot back, says Richard Paterson, blender for Whyte & Mackay, Dalmore and Jura. Slow down and take your time. 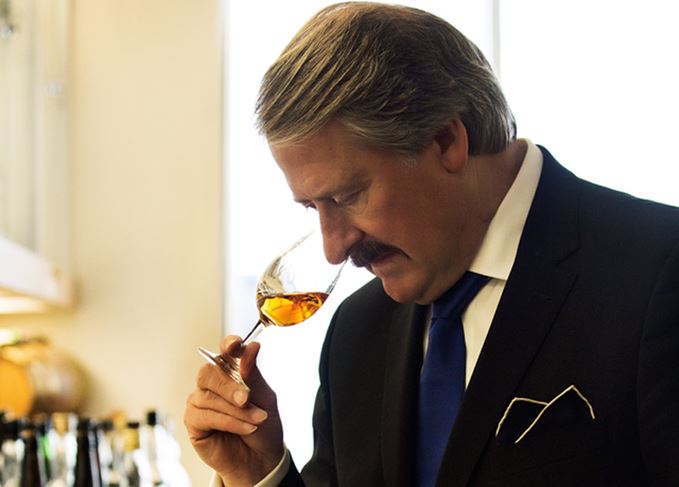 Probably my biggest pet hate is seeing people drinking whisky like a bunch of cowboys in a saloon. They are completely missing the quality by just swallowing it back and not taking the time to hold the whisky on their tongue and revere what it is they are actually drinking.

It happens all the time at whisky festivals. There was one that I remember in New York, where this guy came up to me and asked: ‘What’s your most expensive whisky?’ He went straight for a Dalmore 25-year-old and knocked it back.

‘What d’you mean?’ he replied, so I slapped him on the face. It wasn’t hard and it was almost comic, but I had a serious point to make about showing some respect for the product.

My basic rule of thumb is to give a whisky at least the same amount of time on the tongue in seconds as its age in years on the label. There was another festival in South Africa I went to, where I eventually persuaded this guy to hold a 22-year-old whisky in his mouth for 22 seconds.

‘Now I understand what you mean,’ he said, and then burst into tears.

‘Why are you crying?’ I asked.

‘Because I’m thinking of all those whiskies that I’ve been knocking back that I never gave the time to.’

I have seen it at private dinners on many occasions. Instead of savouring whiskies, especially if they are old and rare, people are swallowing them straight down as though they were drinking a shot of Tequila.

Take it slowly: Gulp down a Dalmore 25 in Paterson’s presence and see what happens

It may be ok for an unaged white spirit like gin, but when it comes to a whisky that is 15, 20 or more years old, you would think that the packaging and price would say to people: ‘Come on guys, you’re paying all this money, really savour every moment of it.’

While in bars, how many people have you ever seen take their first drink and actually hold it in their mouth? Practically no-one. It is the same with good food and wine or a fine cigar. We need to slow down, relax and appreciate what we’re eating, drinking or smoking.

After a day’s work, however hard it has been, I want to come home and pour myself a dram to savour and relax over. But on TV shows like Coronation Street, you will invariably see people in pubs knocking back Scotch whisky as if they were in those cowboy films where ‘real men’ toss down their drinks in a shot.

You could also blame the tradition of having a whisky chaser in the pub. Quite often, especially in Glasgow, you would hear people saying: ‘Let’s have a pint of beer and a chaser to put the icing on the cake.’ Clearly, they’re going to be downing the Scotch in one.

Today there are bars like the Bon Accord or The Pot Still in Glasgow, whose customers do like to linger over their whiskies. Of course, there are rougher pubs where I probably wouldn’t sit swirling a glass and nosing a dram, but once it is in your mouth no-one can see what you’re doing, so it’s not about showing off to anyone.

If I saw a stranger in a bar who was knocking back a whisky that deserved time, I would introduce myself and then ask them about it: ‘Did you get this? Or did you get that?’ Obviously, you have to judge their body language, and I would do it discreetly and respectfully.

Considered approach: Take time to think about the whisky’s flavours and aromas

If you knock it back, you just get the effect of the alcohol. What you are missing is an appreciation of the age of the whisky, and all those different notes of vanilla, honey, spice and so on, that have been meticulously blended together.

Then there are all those other flavours in the background. It is not just about that initial hit, it is the second taste that is the most important thing. There is also the texture and body of the whisky to assess, and the aftertaste as you finally swallow it down the throat.

The trick is to hold the whisky in the middle of the tongue and then let it slip to the sides and underneath before bringing it back up. By now the whisky will have warmed up and settled down and the tongue will be really saturated with the taste of the whisky.

I always urge people to be inquisitive and ask questions of a single malt while it is still in their mouth, such as: ‘Can you really taste whether it’s a Highland or an Islay?’, ‘can you taste all those Sherry notes that it claims to have?’ and ‘would a little water help to open it up?’

But an expensive whisky will also ask questions of you. Have you really bought it to appreciate its flavours? Or is it more about showing off to people, and saying: ‘Look what I’ve got?’

If you do want to get the most out of a dram, remember to give it a second for every year – and then a moment longer – before swallowing it. It takes time to produce good whisky, so take the time to enjoy it.