Why distilleries have cupolas – not pagodas

It’s the classic architectural feature of any malt whisky distillery: the pagoda. Except that Charles Doig’s design isn’t a pagoda at all. Neil Wilson explains all. 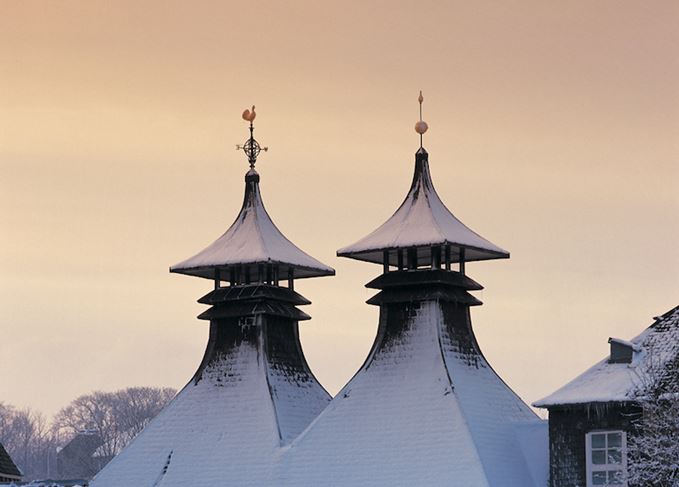 I have been as guilty as anyone of constantly referring to Charles Doig’s most important contribution to modern distillery architecture incorrectly. We’ve been doing it for decades, probably ever since the industry stopped calling it ‘Doig’s Ventilator’.

I am referring, of course, to the pagoda top, which sits on a myriad of kilns at almost every Scottish malt whisky distillery. ‘Ventilator’ is the correct technical term, as the whole purpose of the structure was to draw air up through the quilt of barley lying on the kiln haircloth below, and that functionality has never applied to a pagoda. But how has this misnomer occurred?

Pagodas are multi-tiered, tower-like structures in which people could ascend and descend. They possess characteristic curved eaves and are of South Asian, pre-Christian origin. The only feature of a pagoda that resembles Doig’s creation would be the topmost tier, again with those subtle, curving eaves.

Instead, cupola is exactly the correct term. Although derived from Islamic architecture – massive forms of them existed and were built throughout the first millennium – much smaller and more functional cupolas were used in the 18th and 19th centuries, when they were situated on top of barns to create an updraught to dry the hay below.

Damp hay can create conditions where spontaneous combustion takes place, so cupolas were essential. Thoughout the midwest of the US, the familiar form that Doig adopted can still be seen on many historic barns. They were square or octagonal in form, had louvred sides and the familiar pitched roof. Definitely not a pagoda.

But if Doig created this structure, firstly at Dailuaine, then what was in place prior to his redesign? Something very, very English is the answer: the tall, rotating, fluted ‘Cardinal’s hat’, prevalent wherever hop-drying oast houses existed.

Adopted by Scottish distillers during the early to mid-19th century, these were mounted on the roofs of distillery kilns. Their function was to draw air up through the kiln and they rotated depending on the direction of the prevailing wind. If Doig had not come up with his design, it is possible that oast house ventilators would still be seen across Scotland today, and in all the other countries that adopted Doig’s creation.

Look at the structures that Mortlach possesses in these pictures (photos courtesy University of Aberdeen). The first is the fluted oast house ventilator which appears above a solitary kiln attached to a malting floor.

In the second image, the original can still be seen, but the distillery has undergone a huge expansion with two new kilns and another malting floor evident. In this view, two of Doig’s ventilators can be seen. This image is unique in that both types of ventilator appear side-by-side and it is clear that, as one structure became fashionable, the other gradually died out.

The late Victorian boom in the industry meant that Doig’s ventilator became the fad. His genius was to take a little bit of Oriental affectation and graft it onto something commonplace.