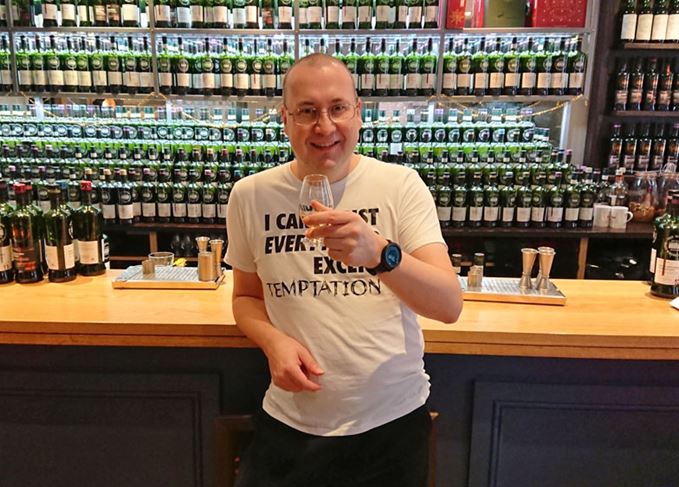 Accidental accumulator: Storry calls his collection a ‘selection’, as he would like to drink them all

Philip Storry is not an easy man to forget. His generous and friendly presence combined with his wealth of knowledge (and opinions), makes him entertaining company. By day an IT technician, in his spare time he is a vocal and passionate whisky lover. Often found in the Clerkenwell, London venue of the Scotch Malt Whisky Society (SMWS), he is never short of a word or two on his favourite subject.

‘I didn’t like beer or lager as a teenager, so I settled on drinking spirits,’ he says. ‘When I decided to explore them further at my local off-licences, whisky was the clear winner – more variety of bottlings, and more flavours in each bottle compared to others.’ So began Storry’s journey into the vortex of whisky. What started as curiosity quickly became something more studious and dedicated when he discovered Milroy’s of Soho in the 1990s, and the more expansive variety of different bottlings on offer.

He doesn’t describe himself as a collector; rather, Storry considers himself more of an accidental accumulator of bottles. ‘I buy whisky bottles faster than I can drink them,’ he says, ‘and a large chunk of my social circle is based around a shared appreciation of whisky. That inevitably ends up giving me lots of opportunities to acquire yet more bottles, creating something of a feedback loop.

‘I tend to call my bottles a selection rather than a collection, as I would like to drink it all – no matter how unrealistic that may seem. Fortunately, my friends seem eager to help.’

Storry’s mantra is, wherever possible, ‘try before you buy’. This has naturally led his ‘selection’ to feature an abundance of bottlings from the SMWS, alongside many bottlings he’s discovered at whisky shows over the years. ‘The vast bulk of my selection is SMWS bottles... I don’t restrict myself to one style or type of whisky, but I’m drawn towards elegant, well-balanced whiskies rather than the single notes of the peat beast or Sherry monster. My selection shows no particular bias in terms of regions or styles, except for an over-representation of grain whiskies.’

Hidden treasure: Storry has been amassing his selection for decades

Grain whisky is something of a passion for Storry, and he’s been known to defend it vigorously against its critics. ‘It’s an underrated style of whisky that’s often a victim of snobbery,’ he says.

‘I’ll admit that I also once thought it to be an uninteresting, neutral spirit only fit to be hidden in blends as a bulk filler. But as I tasted more and more independent bottlings, I slowly realised that I was wrong. I’m now on a mission to get other people to realise that too.’

For anyone keen to explore grain whisky more, Storry usually recommends starting with a comparison of Girvan Patent Still Apps No. 4 and Compass Box Hedonism. As he puts it: ‘It doesn’t matter which one you prefer – the point is to see what difference there can be between grain whiskies.’

Although he is aware that many of his bottles have increased dramatically in price in recent years, Storry retains a refreshing resistance to being swayed by the evolution of the secondary market. ‘I am aware that some bottles I have will have increased in value considerably,’ he says, ‘but if I had to think of whisky as a tradeable asset, rather than part of my home, it’d just get stressful and unenjoyable.

‘I’d have to do research and ask myself if I could afford to open a bottle, rather than just opening it and enjoying it. That would be terrible.’

Added to this has been the recent loss of a close friend, with whom he shared his whisky passion. The event has had a profound effect on Storry. ‘Like myself, he had a large selection of whiskies, which we often shared. But we also had bottles we’d been “saving” for special occasions.

‘Once you have more special bottles than possible special occasions, why are you still saving them? You’re not going to live forever – start drinking them. It took the loss of a friend for me to learn that lesson. I’d urge everyone not to make the mistake of not sharing their whisky in a timely manner, because you never know what the future holds.’

Being interested in whisky for more than two decades now, Storry has witnessed an era of considerable change for the drink. Yet he has retained a healthy, philosophical perspective on whisky discussion points.

When mentioning the character of the drink itself, Storry surmises: ‘It’s a plain fact that there have been changes in production, and I do think that those changes have had an impact on the spirit produced; it was heavier, more interesting and often more viscous. Fortunately, that’s not the whole story. I also think if we spend too long lamenting the losses, we risk missing the great whiskies we’re gaining.’

Whisky playlist: Storry says it is impossible for him to choose just one whisky as his favourite

His opinions also stretch to whisky institutions, including the SMWS. ‘It’s not the Society that I joined, but it’s still the Society I want to be part of,’ he says.

‘I was lucky that, very early on, I met some new friends there who treated it more like a member’s club than an exclusive shop. That means there’s always good company to be found there and the Greville Street venue in London has become something of a home from home for me.

‘Recently they’ve done a decent job of navigating the problem of balancing market forces against providing something special for members... But the core purpose of the Society – getting interesting whiskies for members to try – is still being done very well. If that ever stops, that would be when I’d consider leaving.’

Perhaps what is most telling about Storry is when asked to pick his favourite bottles in his stash he constructs a ‘playlist’ of whiskies, each one defined by his memory of its flavour and character. Similarly, when asked to pick some ‘holy grail’ bottles, apart from some ‘ridiculously-difficult-to-find’ Ben Nevis single grains, he says: ‘I’ve been exceptionally lucky – I started drinking exotic and rare things when they were still affordable, and stocked my shelves accordingly.’

In keeping with the theme of putting drinking and enjoyment of the whiskies themselves at the forefront, when asked about his favourite whisky experience thus far, it’s a surprisingly fresh memory for Storry.

‘I think I’d go for Dramboree. I kept putting it off each year, but managed to make the final one – and I’m very glad I did. It was an excellent event, simply because of the shared love of whisky that brought everyone to it. A dram drunk alone is tolerable, but a bottle drunk alone is tragedy.

‘A whisky event where people bring their own bottles also brings personal stories and a spirit of sharing; that’s hard to explain to anyone used to more conventional ticketed whisky events with stands, like I was.’

It’s a humble but also noble sentiment that serves as a reminder to the rest of us that being a passionate and social drinker is eminently what whisky is about. Storry embodies this belief with great clarity to anyone fortunate enough to have shared a dram with him.