A Touch of the Maldives

Even Whisky Virgins have to get away from it all sometimes. But our wide-eyed ingénu got more than he bargained for on an apparently enviable jaunt to the Indian Ocean archipelago. 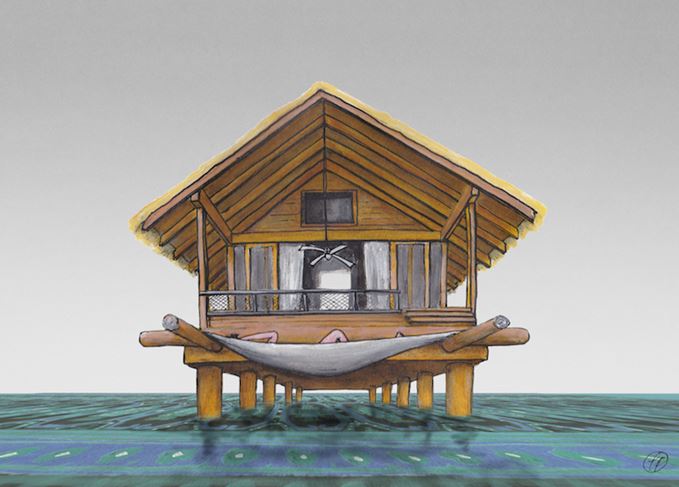 When I die, my epitaph will read: There’s a first time for everything. Of all truisms, it’s my very favourite. The universe is utterly rammed with future firsts, and I am it’s number one user.

Unfortunately, there’s no guarantee as to when it’ll deliver, and at what rate. Sometimes, it does not, and then the world is a desert. Other times, it’s my mother, and all that matters is that I arrive at life’s nipple dressed for action. Excuse me.

Then there are the times when it sets me a test, a bunch of firsts so extreme as to have me begging for the over-familiar. It happened when I was six years old and chopped up my best friend’s mother’s Persian carpet, and in India once, when I drank a pint of drugs masquerading as a milkshake, and also when I saw my child born, gasping and covered in a white cream and looking the spit of an excellent friend.

Today, such a time is the Maldives, on an island exactly like the picture of the island in your mind. It’s where I have gone to stretch my body, eat until I pop, and think vaguely about nothing. I’m on holiday.

Anyway, to the point: I landed last week, caught an internal flight to my island, during which I was honoured with a certificate for crossing the Equator (I’m looking at it now, framed on the wall next to a picture of my father. It has been signed by the plane’s pilot and the all the cabin crew).

Upon landing, and being beautifully greeted, my hosts saluting me, I was shown to my water villa. It’s a marvellous thing, about the size of a swimming pool, and full of marvellous things to do.

After the roll-top freestanding bath, the hammock suspended over the ocean is my absolute favourite thing, and I have spent a lot of time in it, swinging and singing and drinking to the sound of water slapping the underneath of my room, and if not that, then in the bar in which I am currently sat, smoking sweet-smelling hookahs and drinking whisky – Scotch, I think.

Unfortunately, while this has all been very good fun, I have to admit to having grown ever more restless with each passing sunny day.

My golf stroke is not as good here as it is north of the Equator, and there are a lot of large lizards living in the forest behind me, and I heard from one of the staff that one or two guests are found to have been boiling the island’s crabs in their in-room kettles.

Also, not everyone is saluting me as I pass them in my chauffeured buggy, and just this morning someone told me that most of my island and a lot of the rest of the country will be under water in 10 years, and that the old President’s been put in jail by the new President.

Paradise, I have come to realise, is complicated.

Seeking immediate sensory relief, I booked myself into the hotel’s spa, and it is here, as I’m sure you suspect, after just an hour, that I reverse all claims to being master of the novel, the new, the first.

Having blindly opted for a massage offering a rigorous exfoliation of my skin, I filled in a card, ticked NO for everything, and circled on the drawing of a man the parts (dodgy right knee, over-sensitive genitals) that I do not want massaged, and was shown into a changing-room by my masseuse.

Left alone, I undressed and opened the small, transparent pouch she had handed me along with my robe and slippers. Inside was a pair of disposable black underpants, though that is, I have to say, a mighty generous description of their function.

They were made of a Lycra-like netting, and lighter and smaller than a child’s handkerchief and, when I slipped them on and glanced in the mirror, I saw that I was now transformed into a sunburnt knickers fetishist. I took him next-door to be flayed.

All of which brings us to the present mildly unhinged moment, to me in my island bar, hookah in one hand, whisky in the other. Except for my right knee, my tan has been scrubbed clean off my body.

It’s very nice here, and I love the hammock, and this whisky, but now I want to go home, please.

(You’ll be relieved to learn that the Whisky Virgin is safely back from the Maldives. He is without a tan – Ed).