Johnnie Walker is continuing the ‘legacy’ of its relationship with Game of Thrones with the release of two limited edition blends – Johnnie Walker A Song of Ice and Song of Fire. 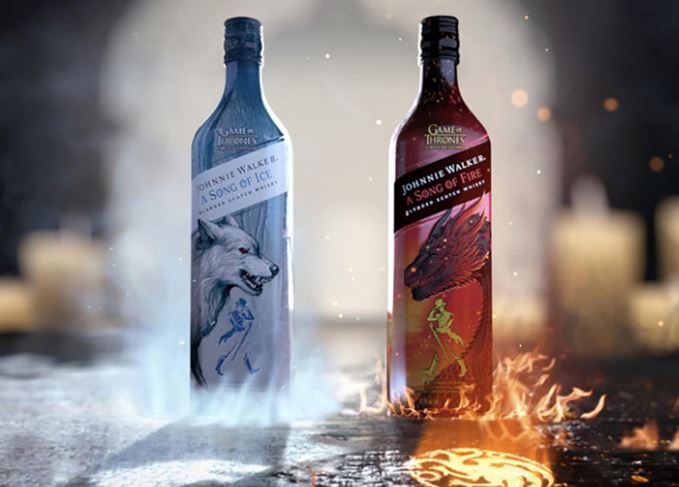 Enduring legacy: Johnnie Walker A Song of Ice and A Song of Fire are inspired by Game of Thrones

A Song of Ice is a blended Scotch inspired by the Direwolves used as the sigil for the House of Stark.

Containing malt whisky from Clynelish distillery, the blend is described as having a ‘crisp, clean taste’ with a ‘green and grassy’ flavour and notes of ‘vanilla and tropical fruit’.

Bottled at 40.2% abv, the expression is said to be best served cold over ice.

Johnnie Walker A Song of Fire meanwhile, is inspired by the dragons commanded by Daenerys Targaryen, also known as the ‘Mother of Dragons’.

Containing peated malt whisky from Caol Ila distillery, the blend is said to feature ‘subtle smoke tempered by a rich, rounded sweetness’, and is bottled at 40.8% abv.

Both Johnnie Walker whiskies will be available in the US from August for around US$43, and are available to pre-order on a ‘first come, first served basis’ from reservebar.com.

The two blends will be available in the rest of the world from October.

HBO’s popular Game of Thrones series ended in May 2019 after eight years.

The show, based on the Song of Ice and Fire fantasy novels by George R. R. Martin, followed the highs and lows of the Great Houses as they battle for the Iron Throne of the Seven Kingdoms.

Scotch whisky maker Diageo released a special Johnnie Walker White Walker edition in October 2018 in anticipation of the final series of Game of Thrones, which first aired in April 2019.

The whisky producer went on to release a series of eight ‘limited edition’ single malts, each representing one of the Great Houses plus the Night’s Watch.