One of the seminal figures in the history of Scotch whisky was an Irishman, Aeneas Coffey, whose work on continuous distillation transformed the industry. Neil Wilson tells his story. 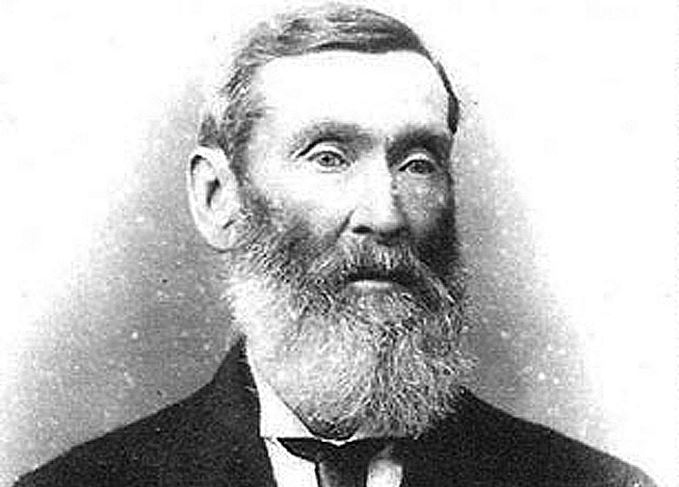 Real Coffey?: This is the only known image of Aeneas Coffey – but it may well be his son

One of the most important figures in the evolution of the modern Scotch whisky industry, Aeneas Coffey’s contributions cannot be underestimated.

Coffey was born, most probably in Dublin, in 1780. His father was Andrew Coffey, an engineer with the Dublin City Waterworks, and he was educated at Trinity College, Dublin.

Coffey built a successful career in the Customs & Excise service, which he joined in 1800. In 1808 he married Susanna Logie and they had three sons over the next eight years: Aeneas jnr, William and Philip.

Coffey rose rapidly and ended his career as a surveying general examiner. Only after his retirement did he have the singular vision of developing the technique of continuous distillation, applying for a patent in 1830; Coffey’s path from exciseman to distiller was one of gamekeeper turned poacher.

He was lucky to survive that long. In November 1810, Coffey had been bayoneted and left for dead near Culdaff in Donegal during the ‘poitín wars’, an incident for which a reward of £200 was offered for information.

In 1816, Coffey recounted the incident to a parliamentary select committee:

‘I was attacked by about 50 men… they fractured my skull, left my whole body one mass of contusion and gave me two bayonet wounds, one of which completely perforated my thigh… and to this day I feel bad effects from them, which I never expect entirely to get rid of.’

Coffey and his brother-in-law and fellow excise inspector, Daniel William Logie, went on to be involved in 1821 in critical experiments with a pair of Captain Pottinger’s inventions at John Thompson’s distillery at Carrickfergus, both designed to deter fraud.

The first was a spirit safe, which was adopted by the Excise with a few modifications. The second was a means to secure the receiving vats and stop them from overfilling, but this was not a success.

However, Coffey then made some changes to the plant to ‘record every part of the distiller’s operations, from the time he brings the wash into the still-house, until he takes the finished spirits out of the receiver’.

Effectively what Coffey had done was to create a closed system, sealed from the start, where the volume of wash was measured, to the finish, where the spirit entered the receivers. Coffey also incorporated a system of interconnected valves which meant that a receiving vat could not be filled while being emptied.

In January 1823, Coffey proposed to the Excise that a new, cheaper, but no less effective padlock be adopted to deter fraud further. He said a ‘paper or piece of card written on, containing the officer‘s signature, or a stamp from the Excise office, or both, might be placed in the inside before the keyhole so as to make it impossible to open it without perforating the card’. Such a lock was eventually adopted by the Excise in June 1829, but it was made by established locksmith Gottlieb. Again, no credit was extended to Coffey – although the designs were almost identical.

After Coffey retired in March 1824, having helped to draft the Excise Act of 1823, he decided to mine his considerable knowledge and expertise, and enter the legal trade. In particular, he turned his attention to the design and function of contemporary continuous stills, first patented by Sir Anthony Perrier (1770-1845), of the Spring Lane Distillery in Cork.

Throughout the 18th century the science and practice of distilling was in constant development, but real progress towards continuous distillation took place towards the end of the century. In 1798, the stillmaker Pontifex created a still whereby the head and neck were separated by a condensing arrangement, creating a form of fractional distillation with partial rectification.

In 1808, the first practical continuous still was invented by Jean-Baptiste Cellier-Blumenthal, and patented in 1813. There soon followed various patents which worked on the same principle with varying degrees of success, among them the Savalle still, named after Dutch sugar trader Armand Savalle, who improved the Cellier-Blumenthal process. Many of these are still in existence in rum and brandy distilleries today.

In 1824, Jean-Jacques Saint Marc of the Belmont Distillery in Vauxhall, London, obtained an early patent for a single-distillation still, effectively a precursor to the 20th-century Lomond still – a pot still with a rectifying head attached which produced potato spirit.

In April the next year, Saint Marc petitioned the Excise, stating that he had erected his still and requesting that it might be tested in the presence of the ‘Board or of their officers’.

Whether this came to anything is not known. But Coffey must have been constantly thinking along the same lines at this time, analysing the newly patented developments in an effort to arrive at the perfect continuous still.

Meanwhile, Robert Stein, a member of the Lowland distilling dynasty which had established a clutch of distilleries in Fife and Kinross, and most famously the Kennetpans and Kilbagie distilleries in Clackmannanshire, was also developing his own still.

In December 1827, Stein registered his first patent (5583), which paved the way for the next stage in continuous distillation (5721 followed the next year). Stein then petitioned the Excise to allow him to experiment with the wash at the Wandsworth distillery in London.

In January 1828, the Excise authorised trials of Stein’s patent still at Kirkliston distillery, near Edinburgh, but these were not undertaken until August 1829.

It is claimed that around this time Coffey witnessed Stein’s still at work at a demonstration in Dublin, where Stein was attempting to market it. The Kirkliston tests were successful and, on 12 May 1830, the first operational patent still in Scotland was installed and licensed at Cameronbridge distillery in Fife.

Coffey was not in the least distracted by this, as he had by this time a design of his own that took the best elements of Stein’s patent, which was a single-column still preceded by three cylindrical, jacketed, copper wash-heaters, but added a second column (the rectifier), into which the wash was piped and pre-heated (thus doing away with Stein’s wash-heaters), before entering the first column (the analyser), where the distillation process began.

Coffey applied for his patent (5974, granted on 5 February 1831) in 1830, when he was proprietor of the Dock distillery in Dublin. While Stein stills were to operate in a number of Scottish distilleries for many years, it was the Coffey still that became the most commercially popular in the industry… except, that is, in Coffey’s native Ireland.

In 1832, the Coffey still was approved by the Excise, having been tested at the Dock distillery and at another in Dublin owned by the Haig family. A year later, the first Coffey still in Scotland was installed at the Grange distillery in Fife, at a time when only malted barley would have been used in the process.

The archetype: Coffey stills were made by many companies, including Willison of Alloa

At this time, Irish pot still whiskey dominated the trade, and the art of blending was still some way off, but the main Irish distillers considered the product of the Coffey still inferior to the traditional pot still; while Coffey went on to quit distilling to become a still-maker, his business only prospered outside Ireland.

The intransigence of the big Dublin distillers would ultimately lead to their demise, as the practice of blending and bottling in bond became common, and the Scotch whisky industry surged to overtake its Irish counterparts in the mid-to-late 19th century.

In 1837, Coffey established the firm of Aeneas Coffey & Sons in Barrow Street, Dublin, but due to the refusal of the big Irish distillers to adopt the technology, and the fact that the London and Scottish distillers were doing so enthusiastically, Coffey handed the reins of the company over to his eldest son, Aeneas jnr, around 1839 – and the entire family decamped to London.

They settled in the parish of St Leonard, Bromley, in the East End, living at 82 High Street, Tower Hamlets. The company was based in Bow, but after Susanna died in 1850 and Aeneas snr on 26 November 1852, Aeneas jnr sold his interests to John Dore & Co, also of Bow, which is still involved in fabrication and still-making, but now based in Guildford.

Aeneas jnr moved to South Africa, where he managed a distillery and married, but his wife died childless and he returned to London to pass his final years.

However, the Coffey still became the standard for the production of grain whisky, which is the bedrock of the Scotch whisky industry, and modern day counterparts are not that far removed from the original design. However, while the original consisted of wooden sections with copper sieve plates in between, nowadays the entire structure is largely made of stainless steel.

There is no memorial to Aeneas Coffey in his native Ireland, and no blue plaque outside any former residence that still might exist in the East End of London. The photo used here, which is widely claimed to be of him, is probably of his son, Aeneas jnr. His father was buried in obscurity, on 1 December 1852 in Tower Hamlets – but he left the world of whisky a legacy few can match.

Coffey still: Click on the diagram above to view a larger image

How does a Coffey still work?
The principle of Coffey’s still is illustrated above. It consists of two, tall, interlinked copper and stainless steel columns, the analyser and the rectifier, which sit side-by-side.
Pressure-fed steam enters the analyser at the base and rises up through a series of compartments, separated by perforated sieve plates. As it does so, hot wash is fed in at the top of the analyser and descends through the compartments.
The rising steam strips the alcohol from the wash and carries it over into the base of the rectifier, where it again ascends though another series of compartments. As it does so, it comes into contact with the cold wash supply pipe, which is routed through the rectifier in a series of loops and coils.
This acts as a surface on which the alcohol vapour condenses, and the strength of the condensate increases as it rises up the rectifier until it is gathered on top of the unperforated spirit plate in the topmost compartment, the spirit chamber.
The spirit this process produces is has less flavour compared to pot still malt spirit, but is of a very high purity at about 96% abv, and is perfect for onward rectification into gin and vodka.
Any uncondensed vapour is redistilled via the wash charger, as is the fluid known as the hot feints, which are piped away from the bottom of the rectifier and pumped back into the upper section of the analyser and redistilled.
Nowadays the wash is fed pre-heated into the analyser, and a cold water pipe acts as the condensing surface in the rectifier. Vacuum-distilling techniques are also more common in the modern day patent still.