A rarely bottled, experimental peated malt produced at the closed Littlemill distillery in the Lowlands.

As a short-lived, experimental malt produced at a ‘lost’ distillery, Dunglass’ rarity is assured. It was never officially bottled and the vast majority of what was distilled went into blends.

Dunglass was one of two peated variants trialled at the Littlemill distillery during the late 1960s, the other being the more heavily peated Dumbuck. Rarely released by independent bottlers, it is now highly prized by collectors. 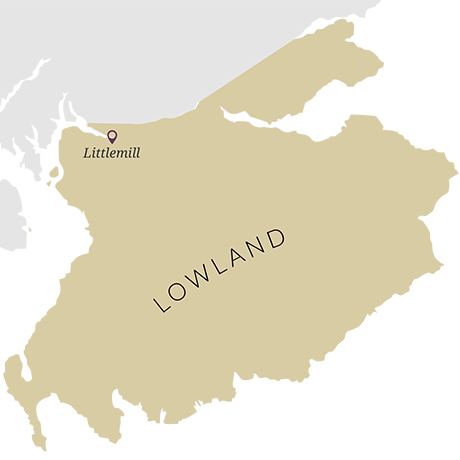 Dunglass was produced briefly in the late 1960s at Littlemill, the Lowlands distillery converted from a brewery in 1772, which endured a difficult early history under multiple owners.

By the 1960s, Littlemill was owned by serial innovator Duncan Thomas and Chicago-based Barton Brands – the latter of whom provided a cash injection that allowed the construction of the Loch Lomond distillery to boost production.

Thomas’s innovations at Littlemill had already made it a versatile plant, and in the late 1960s this was taken further with the experimental production of peated spirit to supplement Littlemill’s trademark floral style.

Distillation of the two variants – lightly peated, ‘heavy and slow-maturing’ Dunglass, including spirit taken from spirit and wash stills, and heavily peated Dumbuck – was short-lived, and Thomas was bought out by Barton Brands shortly afterwards.

Littlemill eventually ceased production in 1992; a fire destroyed most of the remaining buildings in 2004.