Islay may be the hub of island distilling, but the seaside village of Oban and the colourful Isle of Mull have their own unique charms too. Rachel McCormack sets out on a road trip to discover the region and its distilleries. 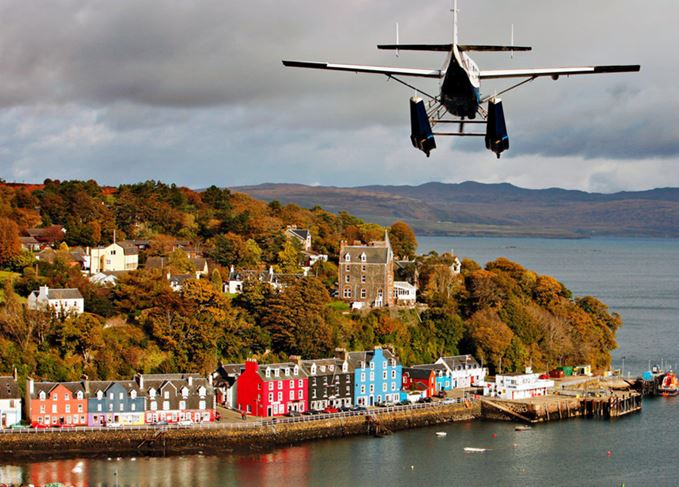 Remote pleasures: Mull is a popular destination for tourists regardless of their love for whisky (Photo: VisitScotland)

‘Are you going to Islay? Islay is the whisky isle, you know.’ With eight working distilleries on it, Islay is its own distinct Scotch whisky region and a place no serious whisky drinker should leave unvisited. It is not, however, the only island in Scotland that makes whisky.

Skye, Lewis, Arran and hopefully soon Raasay, all boast whisky distilleries, all of them with visitor centres and all worth a look. I, on this trip, am going to Mull.

I am making the journey to Scotland’s Inner Hebrides as part of a two-distillery visit to Oban on the mainland, and Tobermory on the island, travelling to and from Glasgow without a car, just to prove to myself that it can be done. Using rural public transport in Scotland may not necessarily be recommended, but it is still possible.

It's a lot quicker to go by road, but there is something romantic about travelling by train from Glasgow to Oban. It's the first part of the West Highland line, one of the most beautiful train journeys in the world that heads on up to Mallaig, and often stops at stations in the middle of nothing and nowhere, places that seem to be trees and lochs and nothing else.

The new fancy city-to-city Scotrail trains with wide seats and wi-fi don't get a look-in on the West Highland line, but don't put your phone away if it has a camera – as soon as the train leaves the town of Helensburgh it rides straight into breathtaking scenery, and what the train lacks in wi-fi it makes up for in extra-large windows.

Modern Oban is now well-known as a resort town, full of tourists and day-trippers exploring the surrounding countryside or taking a trip to one of the nearby Hebridean islands on the ferry. While the town was established in the late 18th century in an effort to generate more wealth from the area’s fishing industry, it was Oban distillery that became the centre of the growing village.

The distillery is still in the same place – the first record of distillation being 1794 – about a five-minute walk from the station past roughly three kilt fitters and two tartan tat shops, then up a side street.

If you’re used to free-standing buildings with pagodas on the top, the distillery at Oban will give you a bit of a shock. As much of the town has grown up around it, the distillery is an integral part of the town and the austere granite buildings beloved of 18th century town planners and architects make it appear carved out of the rock itself.

The distillery tour is a well-organised affair, offering insight from an informed guide and tasting from the cask, but if it fails to satiate your whisky craving – and, let's face it, when does that ever happen? – Whisky Fix on the corner of Stafford Street is worth a visit. The owner, Euan Finlayson, is a very quiet man in his early 30s with an obvious burning passion for whisky.

If there were a national prize for the most number of times the word ‘aye’ can be delivered in a single sentence, Euan would win. Apart from a great selection of whisky, the shop also has a good stock of wine, a wide range of other spirits, as well as an extremely comfy sofa and fire.

At more than 200 years old, the distillery may be something of an institution in Oban, but nowadays the town markets itself as the seafood capital of Scotland, and every pub, bar and café prides itself on fresh fish and high-quality seafood.

The best place to go for a seafood platter is the green Oban Seafood Hut between Wetherspoons and the ferry terminus running trips to the Hebrides. The hut sells the most amazing, freshly caught seafood at incredible prices and is constantly full of locals and travellers from all parts of the world.

The only thing to bear in mind is that it is – as it says – a hut, and its tables are all outside. While they do have umbrellas for the rain, there is no protection against the cold or the wind – and we decided on this trip that, sadly, we'd rather be warm and eat not quite as good cuisine than be freezing in food nirvana.

We went to the Oban Bay Fish Bar and Restaurant and had an excellent meal, but there is also Nories and a never-ending number of places that specialise in fish and seafood.

Oban also seems to be the ‘sea feud’ capital of Scotland and, when the Oban Seafood Hut owner isn't threatening legal action against a rival hut with similar branding, the town’s fish-and-chip shops are fighting over which one of them has been recommended by celebrity chef Rick Stein. You can see how Oban has enough intrigue and drama to keep the average visitor in holiday stories for quite a few years.

Mull, on the other hand, seems, at first sight, to be devoid of drama. Following the 45-minute ferry journey from Oban, what strikes you most upon landing is how much nothing there is. As the main port to mainland Scotland, Craignure on Mull’s east coast is ambitious in calling itself a village – a tiny hamlet would be more precise as the biggest thing about Craignure is the ferry car park.

Christian history: Iona Abbey and Nunnery were built around 1200, and have since been restored (Photo: VisitScotland)

Mull by public transport is where we become slightly unstuck. The only way to get to Fionnphort and the tiny Isle of Iona off the south-west coast of Mull – the home of Iona Abbey and a historic centre of Celtic Christianity – is to take a day tour. The bus picks us and other tourists up at Craignure and we are taken the hour-long journey along a single-track road to the other end of the island.

What makes up for our inability to stop along the way, or choose our own route to explore the island, is the running commentary from the driver who will fill you in on the successful mussel farm, and how members of the rock band Genesis bought quite a large piece of land on Mull and brought employment to the island.

Alternatively, you can take the public bus to the north of Mull and the island’s capital, Tobermory. It is most famously known these days as the setting for the children's TV programme Balamory, but Archie the Inventor is now hosting The News Quiz on BBC Radio 4, Edie McCreadie has long gone and Balamory is but a memory and some merchandise in the shops.

The distillery at Tobermory is situated right beside the bus stop, and a lot of the visitors there seem to be slightly bemused walkers who have never even considered visiting a whisky distillery before.

Like Oban, Tobermory was built in the late 18th century and, while a working distillery now, it has fallen silent a few times over the years. During one of those silent periods, the warehouse across the road was sold off, and instead of maturing barrels it is now a block of flats, some for permanent residents and a few holiday flats to let.

Aside from the flats the other place to benefit from the distillery’s cast-offs is Macgochans, the bar and restaurant alongside it. When the distillery got a new washback, the old one was donated to Macgochans in the form of a new ceiling, so you can have a dram by the fire, stare up at the old washback top, and wonder what it would be like to actually be whisky. There may be other places just as good to relax and enjoy a dram, but there probably aren't many better.