He’s an iconic American football player who caused controversy in the ’60s with his womanising ways and often arrogant outbursts, but he also left spectators in awe with his skills on the pitch. And it was thanks to American football that Joe Namath had his first taste of Scotch whisky, which left him wanting more. Iain Russell reports. 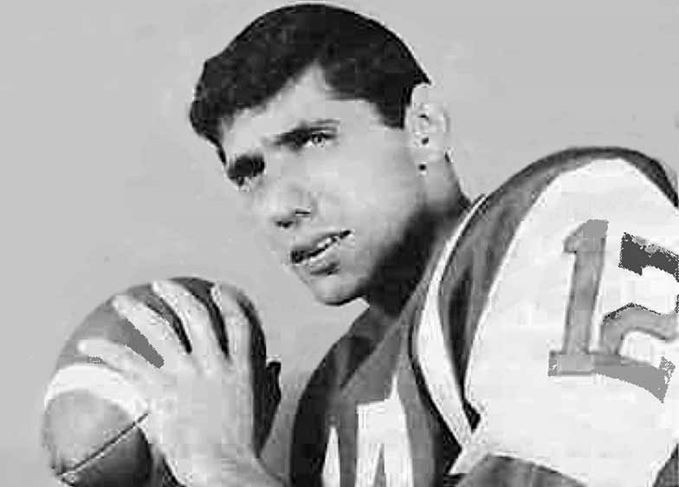 ‘I like my girls blonde and my Johnnie Walker Red,’ quipped Joe Namath, one of the most popular and controversial US sports stars of the 1960s. ‘Broadway Joe’ introduced American football to the combination of youthful rebellion, trend-setting fashion and gossip-page celebrity that George Best brought to the round-ball game in Britain.

The outrageously talented quarterback told the world that partying late into the night, with beautiful women and a bottle of Scotch, made him play better. And, for a while, the fans and his fellow professionals actually believed him.

Joseph William Namath was born in 1943 in Beaver Falls, Pennsylvania. A natural athlete, he might have made a career in baseball but went instead to the University of Alabama on an American football scholarship. Namath was recognised as one of the country’s outstanding young quarterbacks and could have signed for an established National Football League (NFL) team.

Instead, tempted by the biggest contract deal in football history, he chose to join the New York Jets in the recently-formed American Football League (AFL). He was voted the AFL’s rookie of the year in 1965.

It was soon after joining the Jets that Namath discovered Scotch. Like all quarterbacks, the young star was singled out for ferocious hits from opposing defences. He suffered serious injuries on a regular basis and had to live with constant pain.

After taking a particularly brutal pounding during a game in his first season, Namath asked his team doctor for something to ease his discomfort: ‘Whatever tastes the worst,’ he demanded. The doctor poured him a glass of Johnnie Walker Red Label. ‘It did taste terrible, but it made the pain go away,’ he remembered. The whisky didn’t taste so terrible after a while, and Namath became a regular imbiber.

In 1968, Namath led the Jets to the AFL championship, securing a place at Superbowl III in January the following year. As the NFL teams were generally acknowledged to be far superior to the upstarts from the AFL, and as the NFL champions were the Baltimore Colts – widely considered one of the greatest teams in history – most observers expected the Jets to take a hiding.

At a sports banquet three days before the game, reportedly after enjoying a few glasses of Scotch, Namath responded to a heckler with what became one of the most famous quotes in US sporting history: ‘We’re going to win Sunday. I guarantee it.’ To most observers, it was an absurd outburst from a loud-mouthed upstart and Namath was roundly ridiculed. Until, that is, he led the Jets to a shock 16-7 win and secured his place in football history.

The victory was celebrated all the more because of the manner in which Namath claimed that he had prepared for the challenge. He told New York Magazine he had been unable to settle down the night before the AFL Championship decider against the Oakland Raiders because: ‘I got the whole family in town and there’s people all over my apartment and the phone keeps ringing. I wanted to get away from everything. Too crowded and too much noise.

‘So I grabbed a girl and a bottle of Johnnie Walker Red and went to the Summit Hotel and stayed in bed all night with the girl and the bottle.’

As this unorthodox pre-match preparation appeared to have been effective in stimulating his on-field performance, Namath repeated it the night before Superbowl III: ‘I went out and got a bottle and grabbed this girl and brought her back to the hotel in Fort Lauderdale and we had a good time the whole night. It’s good for you. It loosens you up good for the game.’

Stories such as these and flamboyant appearances in the city’s night-spots stoked Namath’s celebrity, and he became one of New York’s favourite sons. And the tongue-in-cheek quotes kept coming: ‘I never drink at half-time,’ for example, and: ‘I don't know whether I prefer Astroturf to grass. I never smoked Astroturf.’ His 1969 autobiography was entitled I Can’t Wait Until Tomorrow… Cause I Get Better-Looking Every Day. A shrinking violet he was not.

In the afterglow of Superbowl III, Namath and two friends opened Bachelors III, a trendy singles bar in Manhattan. ‘Broadway Joe’ was a regular, drinking Scotch in the company of a succession of glamorous ladies. To the dismay of the football authorities, however, he was reportedly socialising with customers who had Mobster connections and he was told to end his connection with the bar.

Smile for the cameras: Namath is remembered today for his Superbowl III performance

After threats to quit football, Namath eventually sold his stake. But he kept his interest in the Bachelor III bars that opened in other US cities, and was a regular and very popular customer when the Jets were on the road.

By his own account, Namath quit Scotch after about five years and switched to vodka ‘for medicinal purposes’, he told 60 Minutes. Of course it didn’t do his career any good; injuries had in any case been taking a terrible toll since he first turned pro – and switching to what he called ‘the clear stuff’ didn’t result in any reduction in his alcohol input. Namath retired in 1977.

The man who once said: ‘I only drink on two occasions: when I’m with people, and when I’m alone,’ had become over-fond of the bottle. He embarrassed himself before the nation in 2003, blurting out: ‘I wanna kiss you,’ to a female reporter half his age during a live pitch-side TV interview. In January 2004, he gave up drinking for good.

Now in his seventies, Namath has two artificial knees and is taking hyperbaric oxygen treatment to treat the effects of all those blows to his head during his playing career.  But the legend of Broadway Joe lives on and the image of him running from the field after Superbowl III, index finger in the air, remains one of the most iconic in American sports history.