He’s the man who makes the world’s best-selling whisky, but Jim Beveridge remains softly-spoken, deflecting praise, determined to share credit with the blending team. Now, 40 years after beginning his Scotch whisky career, he has received royal recognition for his work. Dave Broom reports. 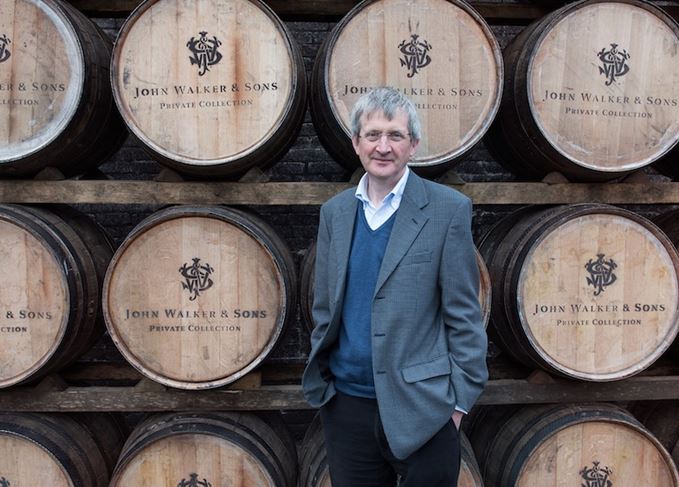 Real world: Jim Beveridge is as likely to be thinking about the sheep on his farm as he is about whisky

Jim Beveridge OBE. It has a certain ring to it. And richly deserved after 40 years of work within whisky. It was typical of the man that, when the news came out, he immediately deflected the congratulations, saying the award wasn’t for him, but ‘the team’ (and it’s always ‘the team’, not ‘my team’).

‘It is a team,’ he tells me soon after, as we sit in a slightly weird London hotel room, a bowl of soggy chips between us. ‘Anything I say about blending is about the team. Any success for Walker is a team effort.’

Does it embarrass you, then, seeing your name on a bottle, when the project might have been led by another member of the group? The answer comes in his usual calm, softly-spoken manner.

‘Yes… it is, but we’ve all got used to it. When we talk Walker these days, it’s about a team of whisky makers – and they’ve become more apparent. I’ve always felt it’s important that they get known.’

This could be a role which gives him superstar status. ‘The man who makes the world’s best-selling whisky’ is a job title which could turn anyone’s head. But he is the personification of the Scotsman who cringes at adulation. He treats all people, be they millionaires or whisky newcomers, in the same calm way and, as you get to know him, you realise that he treats all aspects of his life with the same equanimity.

For example, he and his wife run a farm. A couple of years ago, I was sitting next to him at an event in China when his phone went. He chatted for a few moments and returned to our conversation. ‘Sorry,’ he said, ‘there’s been a bit of a problem with the sheep.’ Five minutes later, he was leading a discussion about the complexities of flavour and blending.

The imminent induction is a long way from the day, in 1979, when he stepped through the doors of DCL’s Glenochil Research Station as a flavour chemist ‘chasing sulphur compounds which have very distinct flavours present in whisky at low levels’.

Difficult times: Beveridge believes some great whiskies were made in the dark days of the ’80s

‘Glenochil was an Aladdin’s cave,’ he recalls. ‘The technology being thrown at whisky was amazing. Looking back, it was last phase of DCL’s investment in that aspect of whisky. After that, the research became more applied.

‘A lot of the knowledge we gathered then, we’re now using, but it’s a different climate. Whisky-making in those days was a traditional process and there wasn’t much innovation, but it was an interesting time – and I was lucky in having 10-15 years of pure research on how to make whisky. It’s been hugely valuable.’

And so he began to build the foundations of understanding whisky’s flavours, where they came from, and then how they changed in casks.

‘The ’80s were difficult, but I think that some of the best whiskies were made then because of the long ferment times, the time stills had to rest, and lots of copper conversation.’ He pauses again, weighing his words. ‘Whiskies from the ’80s were very interesting.’

I’ve learned to wait for him to respond. In earlier times, I’d phone him to ask an undoubtedly daft question. There would be silence. I’d wait for what seemed like 10 minutes, then, just as I was about to make a noise to check he was actually there, the answer would come. It wouldn’t necessarily be the answer to the question – more of an oblique take which took the conversation into far more interesting, linked areas.

It’s happening again now. What starts as a bland question about when he became a blender turns into a discussion about language.

‘I started to get more actively involved in blending in the ’90s, when I began to work with Maureen [Robinson] and Neil [Cochrane] in trying to develop a language for new make. That was a watershed, as it was when we started to talk more about flavour.

‘The insights into understanding the language of malt and creating a common language developed into fundamental knowledge of the flavours which a distillery should be making.’ So you knew what you wanted to do, but needed the language first?

Non-question: Rather than ask ‘blend or malt’, people should focus on quality, says Beveridge

He leans forward. ‘It was impossible otherwise. We had to create a common language between the blending team, which was Maureen; the new make, which was Neil; and the tech part, which was me.

‘Only with that development could we then work through what malt distilleries should be making. Thanks to that, we’re in a better position to manage change and keep consistency.’

Is there a Jim Beveridge approach to blending?

‘Everyone has a different approach. At end of the day, I’m a research chemist, so I always approach it from that angle. That’s part of what I’m thinking when I pick up the glass – understanding the flavours: how it has been made, how it can be used in the blend, then how that impacts on consumers and how you might use that for storytelling. It’s important to understand the consumer base.

‘I also believe that to make good blends you have to understand their complexity, but then make it simple. That’s the best way to approach it – understand what’s behind it, but at the same time you have to simplify.

‘It’s a creative process. You ask the question and can get answers that are unexpected. The trick is then to find out why that has happened, and then being able to apply those insights.’

His modesty means that I’m reluctant to ask him what he’s most proud of, but I do. There’s a long pause.

‘I think the first would be [Johnnie Walker] Double Black. There’s been a lot since, but that gave me a great sense of satisfaction. There was a lot at stake at the time and we [the team again] had to be brave.

‘With Walker, if you are going to do something with flavour, you have to be bold and commit to it. With Double Black, we want it to be smokier, so how far do we go and how do we make it balance with the other flavours?

‘It wasn’t just about dialling up the smoke, but changing the matrix in order to make the smoke work. There were a lot of learnings there.’

Back to Black: Johnnie Walker Double Black was one of Beveridge’s proudest achievements

Which have presumably filtered back into subsequent blends?

‘Absolutely.’ There’s an eagerness in his voice. ‘The next exciting one was when [former Johnnie Walker global brand director] David Gates initiated the Directors’ Blends. I was very lucky because I had the chance to experiment.

‘They were artist’s studies of flavour, rather than being finished blends; studies in smoke, wood, grain or different malt flavours. You can trace how they have influenced the innovations.’

Do you get frustrated by people saying there is no innovation in Scotch?

‘I’d argue that there are some great examples across all producers. It’s right to push boundaries. It’s good to have the definition, because that limits how far you can go, but it’s only right to challenge it; otherwise Scotch will be locked in. You have to push.’

Is there a greater need to do so, given the number of whisky distilleries around the world?

‘Scotch has to be aware of that and it’s more capable of dealing with it. It’s good to have those guys doing what they are doing. It keeps the category alive.’

Which infers that in the past it might not have been as big a priority?

The considered pause. ‘It is … different these days. I always wondered why did we have the whisky loch in the ’80s? What can we learn from it? The biggest lesson is ensuring what we are making today is relevant to today’s consumers.

‘The people who were making Scotch in the ’70s and ’80s? All they’d known was growth. The new generation of blenders who have come in? All they have known is growth. Those of us who have been around a little bit longer have been through the cycle and come out of it wiser, so we have a responsibility to tell what happened.’

But we’re now living in a malt-centric world. How do we get people to understand blends again? There is a determination in the way in which his answer is delivered.

‘By showing why is it important in terms of flavour. Blending is at the centre of it all.’ A slight pause and we’re back into Jim world. ‘I hope we’re beginning to see that the question “malt or blend” is a non-question. It should be about how to do we make greater expressions of great whiskies?

‘Blending is key. Blending brings whisky alive and explodes it into all these different opportunities. Maybe the language needs to change, so we don’t talk about “malt” or “grain”, but amazing whiskies and flavours and how we combine them. The most consistently exciting way to express Scotch is through blending.’

I recall when, at that China conference, he surprised (shall we say) the audience by agreeing that it would help immensely to be allowed to tell people what went into a blend. He nods. ‘One thing we’re learning is that we need to tell you more about what we are doing, who we are, what makes us tick, our thought processes and the wide variety of flavours we use.’

Is that your main motivation?

‘I still remain incredibly curious. This is an amazing product, made by a lot of amazing people. There’s still lots to learn and then apply.’

You’ve said that you’re aware of the responsibility of making Walker, that you feel the blenders from the past looking over your shoulder, but what will be your legacy?

‘I’m conscious of being part of the Walker flavour tradition. The whisky comes from that tradition and it remains a major part of what we do, but now there’s an understanding of going beyond that.

‘Today’s practice will become tomorrow’s tradition. So… showing that there’s room for alternatives.’ A slight nod, the quiet smile. Changing the way in which the world thinks and talks about whisky? That’ll do.

Not long after our chat, I bump into him in the street in Edinburgh. There’s some big Walker event on, but he seems to be heading in the opposite direction.

‘No,’ he replies. ‘I have to get back home. There’s something needing to be done with the sheep.’ And off he goes.

I don’t think he’ll be at all fazed by the palace.