The launch of Midleton Very Rare 2017 marks the 34th annual release in a series that began in 1984. Over that time, the expression touted as ‘the pinnacle of Irish whiskey’ has evolved in line with the stocks from which it is drawn. Richard Woodard reports, with selected tasting notes by Dave Broom and Richard Woodard. 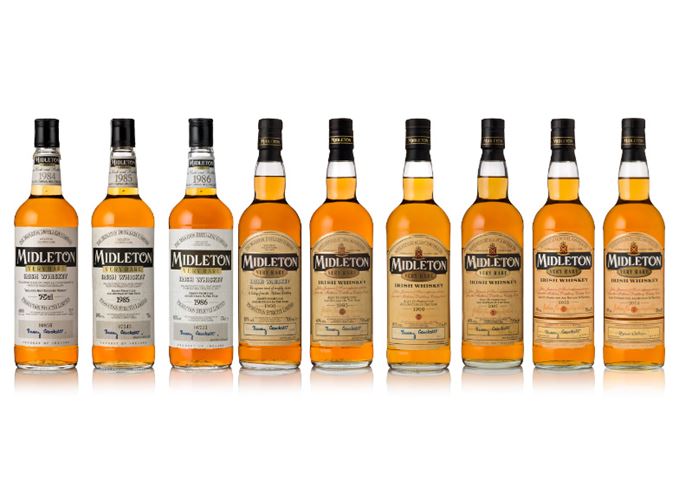 Selected years: Midleton Very Rare releases have been made annually since 1984

In the cask-filled gloom of a Midleton warehouse, master distiller emeritus Barry Crockett is recalling the inaugural tasting of Midleton Very Rare 1984, the first in a line of 34 (so far) annual releases of the blended Irish whiskey.

‘It was launched in one of the new warehouses the year after, in November 1985,’ he remembers. ‘It was an appalling day – pouring with rain. I remember the Minister of Industry and Commerce, a man called John Bruton who later became Taoiseach, was there.

‘We had representatives from the whisky press. The reception was very favourable, although much comment was made on the exaggerated price of IR£40 a bottle. If they would only look forward to the future, they’d have been anxious to buy a few bottles.’

Midleton Very Rare was always billed as the best of the best – ‘the pinnacle of Irish whiskey’, as current Irish Distillers boss Jean-Christophe Coutures describes it – but the whiskey has undergone a considerable evolution over the past 33 years.

At first, the choice of casks was limited – only 32 in the case of 1984 – and the age range was similarly restricted, spanning roughly nine to 13 years for the early releases, a reflection of the the relative youth of the New Midleton Distillery, commissioned in 1974. External factors, such as the economic downturn of the early 1990s, also impacted stock availability.

As the series progressed, the choice of casks expanded to about 100, and the age of the grain and single pot still whiskeys increased too. The most mature whiskeys were 24 years old by the time of Crockett’s last Midleton Very Rare before retirement, in 2013.

This year’s edition, the fourth created by Crockett’s successor as master distiller, Brian Nation, uses the oldest whiskeys in the series to date, including 32-year-old grain and 26-year-old single pot still. The youngest spirit in Midleton Very Rare 2017 is 12 years old (although the whiskey still bears no age statement).

There is a human element at play too, a subtle shift as the baton was handed over to Nation three years ago. ‘There was a change between 2013 and 2014,’ says Crockett. ‘The whiskey in 2014 I thought was a bit lighter and more aromatic.’

Spotting and explaining these variations is an obvious focus for anyone who collects annual releases, but Crockett is also keen to emphasise the common thread that unites 1984 with 2017 and all the years in between.

He counts out four aspects: the ingredients; the distillation methods; the cask type; and the factor of age. He describes three principal flavour characteristics: honey, toasted wood and vanilla, underpinned by a distinct character of single pot still whiskey identified for Very Rare many years ago.

Restricted range: In the early years, there were fewer casks to choose from for blending

The barley brings that green apple note; the grain (maize) a light, fragrant sweetness; the casks are typically first-fill American oak barrels, the source of the vanilla, the toastiness and, in tandem with the distillate, a creamy, honeyed character.

These factors and flavours provide the central theme behind Midleton Very Rare’s many variations over the past three decades and more. Much has changed in that time period – from the age of the whiskeys to the new, swanky packaging and the man in charge of the liquid – but this connection with the past remains vital and strong.

Midleton Very Rare 1984
Some old bottle notes. Gentle, with dried soft fruits, brown banana and nutmeg. There’s some faded flowers and discreet oak. The palate moves into nutmeg to start with, then a soft, sweet and creamy mid-palate with that floral touch, before some peppery apple notes at the end (Dave Broom).
Barry Crockett: ‘When the distillery was commissioned in 1974, there was a move away from the old, heavier pot stills… towards a new, less heavily flavoured grain and pot still.’

Midleton Very Rare 1986
Surprisingly strong, oily, pot still influence. Resinous and supple, with crème brûlée notes from the cask. Ripe banana and blackcurrant, plus some toasted sourdough with whipped butter and grape jelly. In time it’s all toffee and honey. The palate is fruity and silky with the spiciness of single pot still driving through, adding touches of cardamon on the finish (DB).
Brian Nation: ‘I’m surprised by the high pot still here. All of its clove-like spice is more obvious than the grain. This was still a younger age profile.’

Shining stills: The past 33 years have seen numerous changes at Midleton

Midleton Very Rare 1990
Heavy toffee on the nose, with vanilla and some touches of new book. Some flashes of green grape and floral notes are suggestive of the grain element, as is the more perfumed lift. Plenty of subtle pot still underneath. The palate is amazingly sweet: all Demerara sugar and butter with some clove and cinnamon (DB).

Midleton Very Rare 1995
Immediate green apple and a Shreddies-like cereal element. Verbena and hawthorn, spiced vanilla. A sophisticated pâtisserie. Oily, with pot still character to the fore. The thick palate is concentrated, showing darker fruits and set honey, but a tang of acidity maintains balance. Water brings a strawberry-like note, warming spices and Caramac bar (RW).
Barry Crockett: ‘In the initial couple of years, the range of casks was much more limited. Later, this moved to about 100 casks, giving more room to select and put together.’

Midleton Very Rare 1996
This shows a lighter and slightly more restrained character than the 1995, and is more sweet and slightly grassy with Canteloupe melon, citrus and blackcurrant leaf – maybe lighter pot still being used. Its influence is more obvious on the palate, where it adds mouthfeel and an extra spicy kick, which in turn balances sweet pear and Szechuan pepper. Balanced and refined, this develops well in the glass and, though less immediate than earlier vintages, has extra elegance (DB).

Midleton Very Rare 2007
Stewed green apples, vanilla and gentle spice. Quite shy. With time and water, a brighter green apple note. Relatively light in mouthfeel, but lots of pot still spice coming through; longer than anticipated, with understated power. Slowly builds to a crescendo of wood spice – persistent and very warming (RW).
Barry Crockett: ‘The age is now increasing, and we’re getting the benefit of much greater age from 2000 onwards.’

Midleton Very Rare 2013
Black pepper and green apple, morphing into banana; with water, supple spice and leather. The palate is peppery and powerful, and explosively aromatic. Water reveals richer fruit and much more spice. Much greater depth here (RW).
Barry Crockett: ‘The fact that I knew I was going to be 65 [and would retire] didn’t change anything. I always regarded 2012 and 2013 as being the finest of Midleton Very Rare over that 30-year period.’

Midleton Very Rare 2014
Balance is the key here. There’s sweet barley notes, some light, dry grass, mace, cassia, citrus, but a mature peachy power underneath. Some cooked apple, oiliness and spiced honey. The palate is long, with gentle tannin, a touch of maple syrup, toffee, mandarin and rippling pot still that adds a hint of pepper on the end (DB).
Brian Nation: ‘This was my first vintage – I was able to choose from a range of ages from 15 to 22 years old. What I’ve learned is that you shouldn’t force yourself to be different every year, but see what differences just exist within the casks.’