Brian Nation never set out to become a distiller, but he’s now the man responsible for every drop of spirit produced at the vast Midleton distillery, home to Jameson, Green Spot and Midleton Very Rare. He spoke to Richard Woodard about serendipity, single pot still and experimentation. 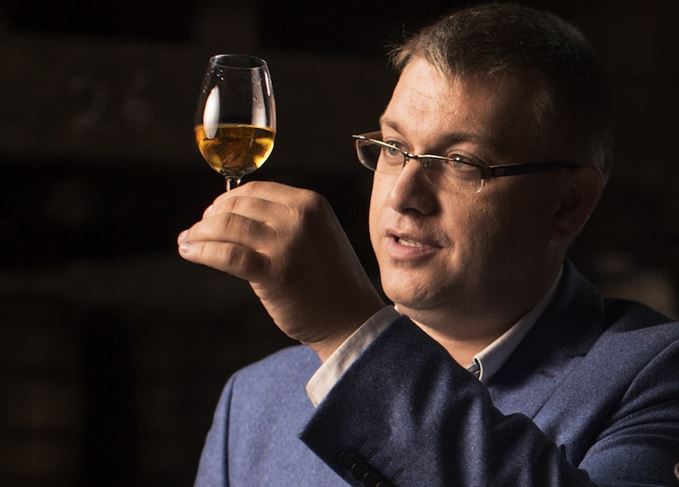 Master of Midleton: But Brian Nation had no intention of becoming a distiller

How do you become a master distiller? For Barry Crockett, who retired from the post five years ago at Midleton distillery in Ireland, the career path appeared inevitable: born in the Midleton distiller’s cottage, to a father, Max, who was already doing the job.

Not so Brian Nation, Crockett’s successor. ‘My background is chemical and process engineering, so I would not have expected to end up in a distillery,’ he admits. But Nation didn’t enjoy being ‘pigeonholed’ while working at an oil refinery, and so took a job as an environmental engineer at Midleton in 1997, setting in train a serendipitous sequence of events.

A year later, he took on the task of ‘de-bottlenecking’ the plant (squeezing more capacity out of it); four years after that, in 2002, he moved fully into production, working alongside Crockett himself.

‘But all through this there was no endgame that I wanted to be the master distiller, just that I did what I was enjoying and I moved where people were moving me,’ he says. ‘And I was very fortunate because I started working very closely in production then, and I spent some time on shift as a supervisor and learned everything about the plant.

‘I was being mentored by Barry, but again it was more of a friendship and a relationship-building, rather than an official “this is mentoring Brian to become the next head distiller”. It’s just as time moved on, then it became apparent that there was a possibility, but I never believed that until it actually happened.’

The career trajectory may have been partly accidental, but Nation is more than happy with the result – and with his choice of role model. ‘I consider myself very fortunate to have been trained by someone like Barry,’ says Nation, ‘because Barry isn’t just an icon of Irish whiskey, he’s an icon of all whisky because of his experience and the affiliation he’s had with Midleton distillery. It’s all a bit surreal really.’

That debt goes deeper, beyond the personal and professional to the quality and character of the whiskeys – single pot still being the most obvious and illustrious example – that Nation works with to this day.

‘That was really down to the foresight of the likes of Barry Crockett, because back in the ’80s when Irish whiskey wasn’t very popular and there wasn’t a great demand for it, the easy option would have been to shut the distillery for half the year and just produce the stocks that you needed,’ says Nation.

‘But Barry and a few others had the foresight to start producing different types of distillate, and also lay them down in different cask types, and that has allowed us to carry on the tradition of single pot still. When you talk about the guardians of single pot still, Barry has definitely been one of them.’

If Crockett saw Midleton through some lean times, Nation’s tenure as master distiller has coincided with a golden age for the distillery. With the official relaunch of single pot still by Irish Distillers in 2010, Redbreast went from a whiskey cherished by those ‘in the know’ to a brand with global ambition, joined by the likes of Green Spot, Yellow Spot, Powers John’s Lane and Barry Crockett Legacy.

Under pressure: Midleton has expanded regularly to cope with demand for Jameson

And, all the while, the Jameson juggernaut thundered on. When French drinks group Pernod Ricard bought Irish Distillers and Midleton in 1988, Jameson was selling roughly 500,000 12-bottle cases a year. Thirty years on, it’s likely to top seven million cases in 2018 without breaking sweat.

Welcome as that kind of stratospheric growth in popularity is, it does pose challenges in terms of keeping up with demand. A new set of pot stills was installed last February and, such was the urgent need for capacity, they were commissioned and producing spirit by May.

But there’s no time to relax. ‘We have a little bit more breathing space, but that quickly changes, you know,’ says Nation. ‘I find it so funny that, when we get in a set of pot stills, we think: “Oh yeah, great, we’ve loads of capacity.” But then the make figures come in and you go: “Ok, we’re losing a lot of that capacity now.”’

Feeding a perennially hungry beast like Jameson can be overpowering, stifling creativity and hindering innovation. That’s where Midleton’s new micro-distillery, commissioned in September 2015, comes in.

This plant within a plant has three purposes: as a training ground for new distillers (everything is manually operated); as a tourist attraction, since this is the only part of Midleton where visitors can see distillation actually happening; and as an incubator for new ideas.

Happy in his work: ‘I just did what I was enjoying,’ says Nation of his early career

It’s early days – too early to give any commitment on when and what will be released from the new plant – and it’s all about learning as you go. ‘We’ve had some stuff that doesn’t work, or stuff that we thought would work quicker, and it hasn’t, and we’re just giving it a little bit more time – but that’s all part of the whole innovation and experimentation,’ explains Nation.

‘And I think in the micro-distillery, when we’re doing more of this innovation on the distillates, it’s a lot easier to make mistakes on a smaller batch than on the batch size up in the main plant… We will be able to make more mistakes on a more regular basis in order to find the right way.’

Working with different cereal grains poses its own challenges. ‘Milling capacity would have been completely cut back when we started to use rye because of the nature and size of the grain,’ explains Nation. ‘It actually cut capacity by about 60% off our mills. Oats – because oats can be quite fluffy and quite light, they actually filled up a grist bin and we’d only half of what we would expect normally in the bin.’

So maybe there were good reasons why distillers stopped using these grains? ‘Yeah, but then you get the flavour and then you get the taste, and you kind of go: “Oh my God!” That’s more to do with efficiency, not flavour.’

Inspired lunacy: The experimental Method & Madness range was launched in 2017

‘We found that the contribution [from the chestnut] was just absolutely amazing and, you know, what it did to the colour of the whisky…’ says Nation. ‘It became this real mahogany colour. And then just the sweetness… and the sweet spice, almost like a cinnamon toast element coming into it. It was just sublime.’

The first Method & Madness products, while innovative, retained their Irish soul. But, with a riot of new distillers starting up all over Ireland, could the desire to experiment go too far, diluting the essential character of Irish whiskey?

‘I think what’s very important for any whisky to be successful is to be innovative, not to sit back on your laurels,’ responds Nation. ‘I think, yes, you have to stay true to the brand as well, to the DNA of the brand. So if you look at any of the releases that are associated with Jameson, they’re innovative, but they stay true to the DNA of Jameson.’

By contrast, Method & Madness is a ‘more experimental, innovative, thinking outside-of-the-box brand, and I think that’s where you can get to play a few more tunes and play something a little different.

‘But I think you’re right in that you have to remain true to your heritage, your craft and the life of the family or the brand that you’re with – so Jameson and Powers and the Spot range, you still have to work within a certain limited area of innovation, but that’s where the likes of Method and Madness comes in.’

As we talk, preparations are under way for the unveiling of the 34th Midleton Very Rare annual release – the blend that, in Nation’s words, represents the ‘pinnacle’ of Irish whiskey. In time, might some of these liquid experiments find their way into an MVR whiskey?

‘Yeah, it’s a difficult question to answer, because I’d never say never to anything,’ says Nation, ‘but I’m also conscious of the platform that MVR has and the style that it has, and definitely carrying on the legacy of Midleton Very Rare from Barry Crockett – I would think that style would remain.

‘However, it doesn’t mean that there couldn’t be different expressions of Midleton whiskey coming out that incorporate and embrace some of the innovations that we’re doing now. If you look at something like Dair Ghaelach, it’s a Midleton-style whiskey, but it’s finished in Irish oak. That’s more where it could sit.’

We’ve been talking in the distiller’s cottage at Midleton, the very house in which Barry Crockett was born before eventually taking over from his father as master distiller. As someone who never saw himself even working at a distillery, was it a daunting prospect for Nation to take on such a coveted role?

‘Obviously, yeah it was,’ he replies. ‘But it’s also… You know, I always remember when Barry was passing on the role to myself, he’d always say to me: “Remember, I’m just passing a baton on to you.”

‘Those were never truer words that he said, because that’s effectively what it is. If you consider it, there’s been generations upon generations of distillers coming through the distillery, and every one of them is doing their little bit, their differences, their nuances and passing it on to the next person.

‘That’s what you want – to pass it on to the next person in as good a shape, if not better than what it was when it was passed on to yourself.’