The lost whiskies of the Cabrach

In the early 1800s, Scotch whisky from the remote Cabrach region of the Highlands was highly sought-after, fetching prices as high as the fabled ‘Glenlivet’. The last of its distilleries fell silent well over 150 years ago, but now whisky is set to return to The Cabrach once more. Richard Woodard reports. 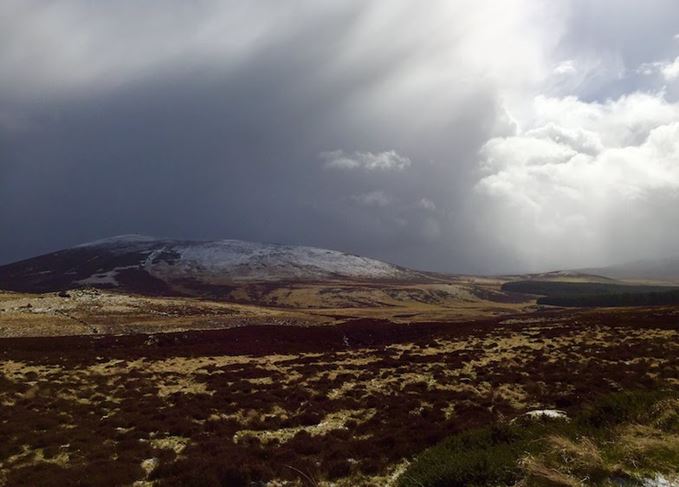 The Cabrach: This remote area produced some of Scotland’s finest whisky 200 years ago

For a brief period in the early 1800s, the whisky of The Cabrach was among the most renowned in Scotland, fetching similar prices to the illustrious ‘Glenlivet’ malt. And yet the last of its stills had fallen silent by 1851, beginning a period of slow, steady decline that has continued to this day in this remote part of the Highlands.

It takes only 15 minutes or so to reach The Cabrach from Dufftown, but once there you enter a different world, and one that becomes progressively wilder the deeper you go, from the rolling green hills and burns of the Lower Cabrach in the north to the heather-clad moorland of the Upper Cabrach, stretching south towards the village of Rhynie.

It is at first glance a desolate place, its many abandoned farmhouses testament to the devastating impact of two World Wars. At the turn of the 20th century, about 1,000 people eked out a living here; only 70 or so remain now and, despite their resilience, their numbers will drop to about 20 by 2050 if depopulation continues at its current rate.

Fresh start: Plans for Inverharroch Farm include a heritage centre and working distillery

But there is hope. The Cabrach Trust, a charity set up to preserve the area’s cultural heritage and aid its regeneration, is aiming to bring whisky-making back to The Cabrach through a £6.5 million project to build a heritage centre and working distillery at Inverharroch Farm. The trust wants to make whisky the old way, recreating the flavours found here around the time that Queen Victoria came to the throne.

‘The Cabrach is a magical place in many ways,’ says Dr Peter Bye-Jensen, heritage manager at The Cabrach Trust. ‘There’s something about the Scottish landscape that’s extra-pronounced here. Time stands still, or it’s more like it’s in slow motion, slow decay. That’s one of the things we’re trying to reverse.’

The Cabrach’s topography makes it a great place to hide and watch, whether you’re a Jacobite rebel fleeing the aftermath of the Battle of Culloden in 1746 or, in the decades that followed, an illicit distiller plying your trade in a hidden bothy by a burn.

‘You can place yourself at strategic points and you’ll know long before people come to find you,’ says Dr Bye-Jensen. ‘An excise officer would have had no chance to enter or leave The Cabrach without anyone knowing well in advance.’

At the first sign of trouble, white sheets would be spread on peatstacks or hillocks as a warning, the stills and other equipment swiftly concealed. The Cabrach offered, as Dr Bye-Jensen puts it, ‘an opportune landscape’ for illicit distilling, while its drove road provided the perfect infrastructure for smuggling.

Great exodus: Hundreds of people have left The Cabrach since the start of the 20th century

By the early 1800s, the practice was endemic. At its peak, there were well over 100 pot stills scattered throughout The Cabrach; most farms hosted at least one still, and many had half-a-dozen. Landowners turned a blind eye to their tenants’ nefarious activities, and often supplied the grain they needed, not least because it enabled them to pay rent.

Over time, whisky from The Cabrach acquired a following in the surrounding area – in Aberdeen, Huntly, Banff and as far afield as Montrose – but the region’s whisky-making decline began with the passing of the 1823 Excise Act, which revolutionised whisky production in Scotland and sounded the death-knell for most illicit distillation within a few years.

(Most, but by no means all. As late as July 1827, the Inverness Courier reported the transportation of John and William Gordon (or Garden) for shooting one of an excise officer’s party in The Cabrach earlier that year.)

Such was the impact on The Cabrach that some 80 or 90 people departed the area post-1823, robbed of their livelihoods and forced to seek their fortunes elsewhere, sometimes as far away as the United States or Jamaica. For those who remained, an already hard life became even tougher.

Three legal whisky distilleries emerged in The Cabrach in the aftermath of 1823: The Cabrach Distillery at Mains of Lesmurdie and Tomnaven, in the Lower Cabrach; and Blackmiddens (later renamed Buck) in the Upper Cabrach, the latter recently the scene of an archaeological dig.

Brighter future?: The Cabrach Trust hopes its plans will help regenerate the area

These were small, farm affairs, using stills that were tiny by modern standards (wash stills of about 200 gallons, spirit stills at 120 gallons, although Blackmiddens/Buck seems to have had only one still to perform both distillations). They used bere barley, and sometimes corn, grown on the surrounding land and imported from further afield, including the Lowlands and England.

All three started up in 1825-8, but none lasted long. Blackmiddens/Buck fell silent by 1833, and the others closed down some time in the 1840s. In this new world of legal distillation, The Cabrach’s major plus-point of remoteness became a huge commercial disadvantage.

There were threats from the remaining illicit distillers, and competition from new distilleries set up in and around the towns that formed the main local markets for whisky. Duty was increasing, brandy and rum were becoming popular, and the rising Temperance movement was impacting consumption.

After several crop failures and with a suffering Scottish economy in the early 1840s, grain prices rose, while fierce winters cut off transport links with the outside world, stopping grain from getting in and whisky from getting out. The Cabrach was ill-equipped to survive such a perfect storm of difficulties.

As whisky left The Cabrach, the exodus of people that went with it heralded further losses in the 20th century, particularly during the First World War. ‘Everybody that could carry a rifle signed up, and very few came back again,’ says Dr Bye-Jensen. ‘Some came home only to die a few years later from war wounds, and others had suffered shell shock, or what we would now call PTSD.’

Past times: Many of the abandoned farms of The Cabrach housed stills in the 1800s

Some never made it as far as the Western Front, perishing of influenza or measles in English training camps; young men who had never previously left The Cabrach simply lacked the necessary immunity to resist common ailments.

A century later, despite past sadnesses, the scent of renewal is in the air. If The Cabrach Trust can raise the necessary funds, the heritage centre and distillery at Inverharroch Farm will create up to 15 jobs when it opens in about 2021, providing a focus for the area’s planned regeneration and giving people a reason to discover the area (about 20,000 visitors a year are expected). And whisky will be a big part of the plan.

‘What we’re going to try and aim for is to make a historic whisky,’ says Dr Bye-Jensen. ‘We’re going to lean up against what we think the whisky would have tasted like, experimenting with old techniques which have been forgotten, and staying as close to the historic reality as we can.’

So: peat, small stills, worm tubs, bere barley grown in the surrounding fields and tentative plans to malt on-site, as well as perhaps converting an old school into a bonded warehouse.

Whether it will taste like the whisky made in The Cabrach in the early 1800s is unanswerable, as is the question of what made the area’s whisky so special in the first place. Dr Bye-Jensen reckons slow distillation in small stills – compared to the more industrialised production in the Lowlands – was key, as was the ubiquitous use of peat. ‘It was a whisky that tasted like something,’ he says.

Different place: The Cabrach is only 15 minutes from Dufftown, but is another world

Two qualities that Cabrach whisky certainly lacked were maturity and consistency, thanks to the necessarily chaotic nature of illicit distillation. Smuggled along the drove road and through the hills in ‘ankers’ – small, 10-gallon casks – the spirit produced was highly variable and extremely youthful.

Those who had to sell it – the grocers and innkeepers of the local towns – soon learned to ‘condition’ the whisky to make it more palatable to their customers, combining multiple whiskies in larger casks or, when something tasted awry, decanting it into a fresh cask to improve it. These pioneering techniques laid the foundations for the blending and maturation practices that have helped to shape the modern whisky industry.

‘This is the cradle. This is where it all began,’ says Dr Bye-Jensen. ‘Our funders can see that we’ve got something special here. Once they visit us and just go for a little walk, then it makes sense to them. We’re trying to tell the story of where this whisky that we all almost take for granted comes from.

‘It comes from the burns, from the landscape. The landscape remembers what its people forget.’