Japanese distillers are driving innovation within the grain whisky category. But is Scotch up to the challenge of competing in this up-and-coming sector? And, perhaps more importantly, should it be doing so? Dave Broom reports. 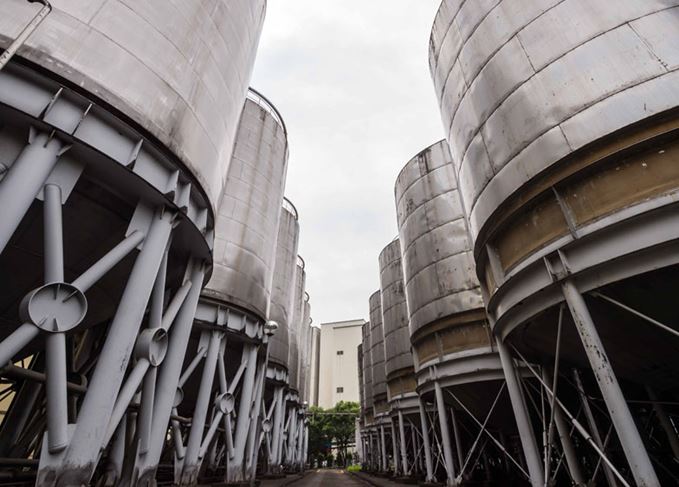 ‘It takes 24 hours to fill one of these washbacks,’ says Hisashi Maemura with a laugh. We were standing in the middle of Brobdingnagian distilling equipment: silos that reached the sky, huge fermenters and a multi-storey distilling set up. Grain distilleries tend to be large, but Suntory’s Chita seemed particularly vast.

Does size matter? In grain it does. Size is one reason given by Scotch firms for making one style of grain per distillery. It’s hard to do small batches when you are set up to produce volume. Another reason for the one distillery/one style approach is the fact that Scotch producers will swap stock and as each distillery makes a different style, then variety is built into the wider industry rather than in a single plant. Makes sense. Scotch and Japanese whisky are different.

Faced with a severe stock shortage of mature malt, Japanese whisky makers are viewing grain as one way to maintain their current momentum. This has resulted in some approaches to grain whisky which seem radical from a Scotch perspective.

Take Chita, where Maemura and his team make three styles of corn-based grain – light (from four columns), medium (rather sweetly called ‘tasty’, from three columns) and heavy (from two). The light and heavy have been made since the distillery opened in 1973. In the 1990s, the medium style was added. As well as being used in all of the Japanese giant’s blends, all three are used in Suntory’s new brand, The Chita, which launched last year.

After the distillery visit, we headed into Nagoya to a standing bar next to the station, dedicated to the brand. Before your first highball even arrives you’re given a delicate but umami-rich broth in order to tune your palate. The highballs themselves can be served au naturel, or garnished with a regularly changing range of garnishes such as sudachi (citrus) or sanchō (fragrant pepper). There’s also a mizuwari serve where the whisky and the water have been allowed to marry for 24 hours adding texture and richness – and yes, I did compare it to a freshly made mizuwari. Every serve is matched with food.

‘People are looking for new whisky styles,’ says Maemura, ‘not just malt, and we are seeing drinkers coming in from beer and also shochu.’

The Chita though is not sufficient for Suntory’s aims. ‘The grain we make at Chita is made for blends and isn’t really suitable for single grain,’ says the firm’s chief blender Shinji Fukuyo. ‘That’s one reason I used different casks including wine casks for the brand. If we are wanting to broaden the category and find out what grain could be, we needed to make many different styles.’ Hence the installation six years ago of a small(ish) two column still set up at the Hakushu malt plant.

Here they are running corn, wheat, rye and malt, looking at the effects of different yeasts and different strengths. ‘I realised that the only reason we distilled grain whisky to 94.8% is because the Scots do it!’ says Fukuyo. ‘So I asked the team to start distilling at different strengths, just to see what the results would be. A lot of the lessons learned can then be fed into Chita to continue to develop that brand.’

The visit had followed on from a trip to Kirin’s Gotemba plant in the shadow of Mount Fuji. This was built in 1973 as a joint venture with Seagram (RIP) and at first glance is a Canadian whisky distillery in the middle of Japan. Although single malt is made, it is grain that is Gotemba’s speciality. It has a five column still producing a light style, and a ‘kettle and column’ set up (the distillate from a beer column is held in a ‘kettle’ and then redistilled in a rectifying column) giving a remarkable fat, textured, rich spirit. There is also a beer column and doubler giving the heaviest spirit, which is fermented with a different yeast from the other two. Plus, there are different mash bills including a high rye one.

‘We’re trying to create our own style,’ says chief blender Jota Tanaka, adding with typical Japanese modesty, ‘it’s a work in progress, and there’s room for improvement.’ He paused. ‘Actually, there should always be room for something different – and better. Consumers are greedy, always wanting something new. Distillers need to be the same, always improving, always creating something new and surprising. Grain will be key to Gotemba’s future.’

A week later I was in yet another grain plant, this time at Nikka’s Miyagikyo distillery, which houses its two Coffey stills made (in Glasgow, by the way) in 1963 and ’65. These make the firm’s rightly famed Coffey Malt and Coffey Grain, both of which will be receiving increased attention as Nikka looks for sales outwith its malts and blends portfolio.

Like its rivals, Nikka is not satisfied with just making one style of grain. As well as the Coffey Malt there’s light, medium, heavy, heavier and super heavy spirits being made, fermented with different yeasts and taken off at different strengths. The Coffey brands are blends of these different styles, which goes some way to explain their depth and roundness of character. This is grain as a robust and mellow distillate, not a light spirit given weight by active wood.

‘You need to use different yeasts, strengths and casks to obtain harmony,’ says the firm’s chief blender Tadashi Sakuma. ‘I think that the grains from here have texture compared to other grains, especially from Scotland. It is something which differentiates us from the rest, allowing us to have more impact.’ It sums up the Japanese approach which is one of relentless innovation and pushing for the next development.

Could Scotch do this? Yes. In fact, Loch Lomond already does. The more important question is should Scotch do this? There is an argument that says you need to preserve your identity, and the Scotch way of making grain is already fixed. Why then copy?

The counter argument is stocks of mature malt are tight in Scotch, while there is a (relative) glut of grain. We are already seeing grain whisky emerging as a stand-alone category, but it is new. That means consumers do not yet have a fixed idea of what grain whisky is, or what the quality benchmark is. The opportunities are there – and they are potentially huge. If grain whisky is going to be a new battlefield, then it might be wise for Scotch to look at innovation and flexibility in order to see what grain could be.

As it stands, Japan is already miles ahead.