There are several misconceptions surrounding salmon – the most common, perhaps, being the assumption that all salmon originates from Scotland. It was this notion that inspired Richard Cook to found his own salmon smokery Severn and Wye in England nearly 30 years ago. Fiona Beckett paid the firm a visit to learn more. 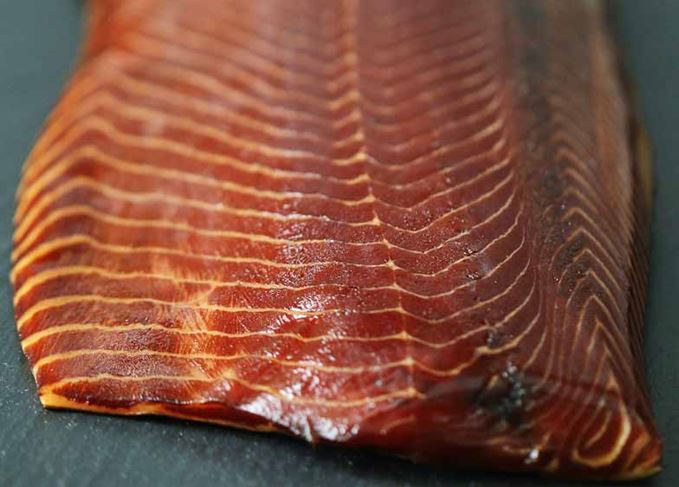 Severn and Wye: The firm focuses on farmed salmon, with a tiny percentage of wild fish

It’s not the average teenager who decides to tackle the food industry head-on by setting up his own salmon smokery. But that’s exactly what Richard Cook, then 18, did back in 1989.

Prior to that he’d been helping his dad (now 78 and still working at the family firm Severn & Wye Smokery) on his farm and salmon fishery, harvesting glass eels and salmon. Noticing that the fish they were sending up to London were being re-labelled as Scottish, he spotted a marketing opportunity and persuaded his dad to set him up in business.

Now, the company, which is based just outside Gloucester in Westbury-on-Severn, supplies many of the UK’s top restaurants, including the Ritz, Gordon Ramsay, and Martin Wishart in Edinburgh.

So what’s the secret to salmon curing and smoking? These days the business is all about farmed salmon – only a tiny percentage of its output is wild and, even then, only when it’s in season (from June to September).

‘The key is quality fish and good husbandry, which relates to the stocking density and the location of the farms,’ says Cook. ‘We love fish that have had a lot of water through the nets and are more of an athlete. Some of the best locations are where wild salmon are caught – Scotland, Ireland, the Faroes, Iceland and Norway. You need a constant temperature. Not too warm or too cold in winter.’

They inspect the farms personally. ‘Anyone can put on a good show for the day. We can spend a whole week doing an audit,’ he adds.

The way in which the salmon are killed is as important as it is with cattle. ‘They need to be chilled, not stressed,’ advises Cook. ‘If they’re stressed out at the point of slaughter, the structure of fillet can be very soft and you can get issues with splitting.’

The size of the fish is also a factor and varies for different markets. He explains: ‘The US and Japan like heavier fish, but they’re fattier and harder to cure well.’

Chilled out: Salmon need to be ‘relaxed’ before slaughter, or the quality will be affected

Sugar and salt are the main curing agents, with salt being the most effective, according to Cook. ‘The British are really good at salting fish. But if you only use salt you need to be timely and accurate. You can’t afford to leave it in too long.’

They’ve experimented with a wide variety of salts, including organic salt, Himalayan salt and Halen Mon from Anglesey. What difference does it make? ‘Brutally? None,’ he admits.

Instead, it’s the combination of sugar and salt that makes the real difference. A little sugar takes the edge off the saltiness, and makes for a ‘more robust cure’.

‘It doesn’t matter so much if you’re late taking it out, but you have to increase the drying time as it drives less moisture out of the fish,’ Cook continues. ‘The usual ratio is 20% sugar to 80% salt, though chefs prefer it different ways. Some want it 60/40. It’s up to them. We don’t foist our opinions on the customer.’

The type of wood that’s used also makes a difference, and Cook only uses oak. ‘We could use soft wood to save money, but it wouldn’t be as good. Some firms use this [he brings out a tub of smoking powder with disgust], and don’t even have a chimney.’

Next, he lines up a row of cures and smokes and gets me to feel the fish. They look and feel markedly different. The Fyne cure, for example, which is smoked for six hours, is still quite soft and yielding, while the VAR salmon from the Faroe islands – favoured by chef John Williams at the Ritz –is smoked for 24 hours and is much firmer.

‘He’s very particular about his salmon,’ says Cook about Williams. ‘It’s the first thing he checks when he goes in in the morning. If it’s not exactly right, he’ll be on the phone.’

They’re constantly experimenting with different cures. ‘British Airways, for example, currently has an orange and tarragon cure we do for them in First Class.’

Fresh cuts: Salmon should be cut down the middle to taste the centre and edge of the fish

And do they use whisky? ‘Well, as we knew you were coming we’ve prepared a special whisky and honey cure,’ says Severn & Wye’s ambassador Dai Francis, pulling out a packet like a rabbit out of a hat. We all taste it critically. ‘Too much smoke, not enough whisky,’ pronounces Cook, but he’s seeing the potential.

The final variant that can affect the flavour of salmon is the way that it’s sliced. ‘Some chefs favour a long cut right [along] the length of the fish, while others go for the more popular D cut,’ explains Cook. The proper way to appreciate salmon is, apparently, to cut it down the middle so you get to taste both the centre and edge of the fish. ‘The top surface always has more cure than the centre.’

‘I eat salmon every day,’ says Cook, proudly. He sometimes sends his team out to find the worst – yes, worst – pack of Severn and Wye fish that they can find on store shelves. As long as the worst ‘tastes OK’, Cook is a happy man.

Scotch whisky is one of the best pairings for smoked salmon, but which one should you pick? Fiona Beckett tried a range of styles with Severn & Wye’s different cures and smokes, and came to the following conclusions:

3. Rich, Sherried whiskies like Macallan were the least successful pairings, though a full-flavoured, malty soda bread – and some good unsalted butter – can kick them into touch.

4. A squeeze of lemon rarely helps a whisky match, though freshly ground black pepper often improves it. Either way, wait until you’ve tasted the whisky.

And as a final tip, you’ll get more flavour out of any smoked salmon if you take it out of the fridge 45 minutes to an hour before you eat it.