Johnnie Walker has a new, more joyful incarnation of its hugely successful Keep Walking campaign. It’s big, it’s bold – but will it bring momentum back to a brand that shows signs of faltering? Richard Woodard reports. 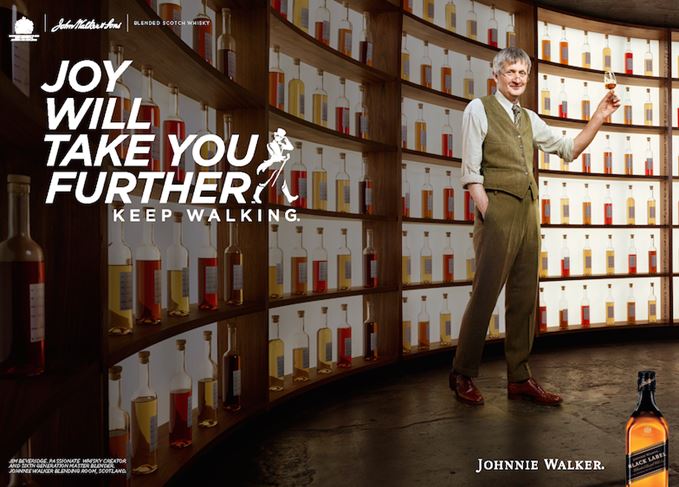 Successful marketing campaigns bring their own pressures. When your chosen brand platform has endured for more than 15 years and nearly doubled your global sales volumes, how easy is it to take the plunge and make the change?

This is the dilemma which faced Diageo and Johnnie Walker, and which has – you suspect after much soul-searching – resulted in Joy Will Take You Further, the new, shiny and happy reinterpretation of Walker’s much-lauded Keep Walking campaign.

In the end – as so often – the numbers made change inevitable. After moving in apparently inexorable fashion from 10m to 19m cases during the life of Keep Walking, which began in 1999, Walker took a minor backward step in 2014, losing 1.7% of its volumes to fall back below 19m cases.

‘Today we are at another inflection point and it’s the right time,’ said Diageo CEO Ivan Menezes at the London unveiling of Joy. ‘We must reflect the changing world we live in. Millennial consumers … have evolved their views on progress and what getting ahead means.’

Amanda Fève, chief strategy officer at Walker’s global creative agency, Anomaly, offered not so much an explanation of the Joy campaign as a philosophical dissection of the angst-filled lives led by modern people.

The central question asked in pre-campaign research – of consumers, of psychiatrists, of psychologists around the globe – was: what does progress mean in today’s world?

Startlingly, one of the headline findings was that young people no longer want to be Kurt Cobain, Ayrton Senna or Claudia Schiffer, but would rather turn into Mark Zuckerberg or Biz Stone. Rather than stickin’ it to the man, they’d rather be the man, entrepreneurs running their own businesses on their own terms.

As Fève put it: ‘Are we getting far enough fast enough?’

Role model?: Jenson Button is one of the celebrities associated with the campaign

What’s missing from this dystopian take on personal progress is the lack of enjoyment of the moment. If happiness is the destination, but we spend our entire lives obsessed by the journey, will we ever get there? Can we?

Apparently not, if a psychologist in China is to be believed. His client, a top car company CEO, admitted: ‘I have absolutely no idea how to be happy.’

Phew. Depressing stuff. But, luckily, Fève, Diageo and Johnnie Walker have the answer: flip the formula, reframe progress, learn that it is not something to be endured, but enjoyed.

Success, Fève explained, might not lead to happiness, but happiness can lead to success.

Philosophically, that’s a neat theory, but is it also somewhat disingenuous? The logical conclusion of Anomaly’s findings ought to be that people should live in the present, carpe diem, pursue happiness as the means and the end. Happiness for happiness’ sake.

The trouble is that that doesn’t quite fit the Keep Walking template and, despite the recent sales blip, Diageo can’t quite let its prized platform go.

So: happiness can’t just be an end in itself, it has to be the means to yet greater success, bigger, shinier things. Keep walking, but put a smile on your face. And, preferably, drink more Blue Label while you’re doing it.

The nuts and bolts of the campaign are as comprehensive as you’d expect of a consumer brand of the stature and value of Walker: a campaign activated across 50 markets at once, designed to reach almost 270m consumers within weeks of launch; contextual advertising (where the ads say something clever about their location); a film starring Jude Law and a vintage car.

Law is just one of a kitchen sink of celebrity ambassadors, who are central to the campaign and star, mid-stride in a conscious aping of the man himself, in a series of Johnnie Walker ads.

They’re a blue-chip bunch, right enough, but did Diageo miss a trick here? Given that the role models for Generation Y are CEOs of their own start-ups, will a couple of actors, a racing driver, a rock band and a supermodel (among others) offer the right aspirational touch?

Still, the highlight for me has to be the surreal juxtaposition of two of the campaign’s poster boys: Jude Law and, in the very next ad, master blender Jim Beveridge. Which reminds me: several hundred words in, we haven’t even mentioned the liquid.

Part of the campaign involves the creation of Blenders’ Rooms, designed to tell anyone who’s interested just how complex and skilled a task Jim and his crew undertake with Walker, creating and maintaining the spirit that, in the end, makes the brand sink or swim.

In a whisky world that is belatedly awakening from its single malt slumber and realising the extent of the neglect suffered by blends (in mature markets at least), this was a welcome epilogue to all the meta-talk of consumer insight and formula flipping. Lest we forget, beyond diagonal labels and striding men, Black Label is bloody good whisky.

Oh, and the music accompanying the ads was pretty good too: Plastic Bertrand. Could one of the world’s famous Belgians boost one of Scotland’s most illustrious exports? Ça plane pour moi.